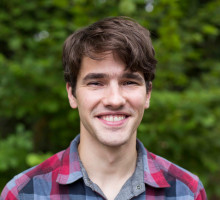 Dave Blanchard is a producer for Oregon Public Broadcasting’s daily talk show, Think Out Loud. He came to OPB by way of Seattle’s NPR-affiliate station KUOW, where he worked for a number of shows including Weekday, The Conversation, and Speakers’ Forum.

Dave graduated from Whitman College in Walla, Walla with a degree in philosophy in 2009.