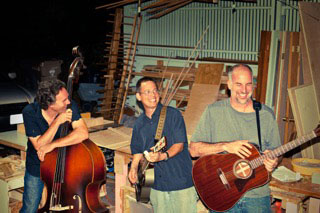 Mule On Fire bring their own particular Northwest weave of acoustic blues, folk, and traditional music. Hailing from Portland and Corvallis, Oregon, they’ve played a variety of stages, barns, backyards, and campfires, and have deep musical and literary roots.

George Estreich a multi-instrumentalist, who plays guitar, mandolin, resonator, lap steel, keyboards, and a few more instruments he hasn’t quite invented yet. George’s memoir about raising a daughter with Down syndrome, The Shape of the Eye, won the 2012 Oregon Book Award in Creative Nonfiction. His prose has been published in The Open Bar, Biopolitical Times, The Oregonian, Salon, and The New York Times. Website

Marty Main grew up as one of the “young guns” of the West Coast traditional jazz scene, playing in bands with his father. He was a jazz studies major with an award-winning college big band, and subsequently played ska and noise-pop in the San Francisco Bay Area. After many years in the recording studio as an engineer, producer, and part-time session musician, he moved to Corvallis and retired from music for 15 years. George found him in a wine-fueled jam session and dragged him off the musical retirement woodpile to play bass in his multitude of music endeavors, including Mule On Fire.

Matt Yurdana is a guitarist and vocalist who got his start singing in the shower. Matt’s book of poems, Public Gestures, was a finalist for the Oregon Book Award. He’s received an NEA Fellowship in Poetry, a Pushcart Prize, and his poems have appeared in a variety of places, including Alaska Quarterly Review, Beloit Poetry Journal, The Massachusetts Review, The North American Review, Poetry Northwest, Prairie Schooner, and The Southern Review.

Mule on Fire will give a Pop-Up Performance at 11am in the Modern and Contemporary Art Gallery (Jubitz Center, 1st Floor).