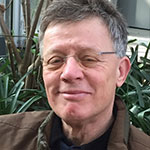 Christopher Zinn grew up in Pine City, NY, and was educated at Georgetown and at New York University, where he received his Ph.D. in English and American Literature. He taught Humanities and American literature at Reed College, directed the college’s American Studies program, and was Fulbright Senior lecturer in Turkey in 1993-94. In May 1997, he was appointed Executive Director of the Oregon Council for the Humanities, and continued in that position until 2006. He has also taught cultural history at the Oregon College of Art and Craft and lectures and writes frequently on American literature and culture. He has served on the Board of Directors of the Federation of State Humanities Councils, and serves on the Oregon 150 Commission, the National Advisory Board of Imagining America, and the Multnomah County Cultural Coalition. Christopher currently teaches humanities at the Portland Waldorf High School. 2018/2019 marks his twelfth season as a Delve Guide.

William Faulkner: The Sound and the Fury (2016)