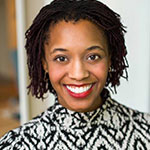 Shayla Lawson is (and / or, at times, has been) an amateur acrobat, an architect, a Dutch housewife, and dog mother to one irascible hound. Her work has appeared in print & online at Tin House, GRAMMA, ESPN, Salon, The Offing, Guernica, Colorado Review, Barrelhouse, & MiPOesias.  She is the author of: A Speed Education in Human Being, PANTONE, & the forthcoming I Think I’m Ready to See Frank Ocean. A 2017 Oregon Literary & MacDowell Colony Fellow, she is also a member of The Affrilachian Poets.

Spring 2017: The Body In Peril: Writing Our Way Out of Trauma through Poetic Form

Shaken and Stirred: Mixing the Genres

Challenge Yourself To Write: Developing Your Writing Practice