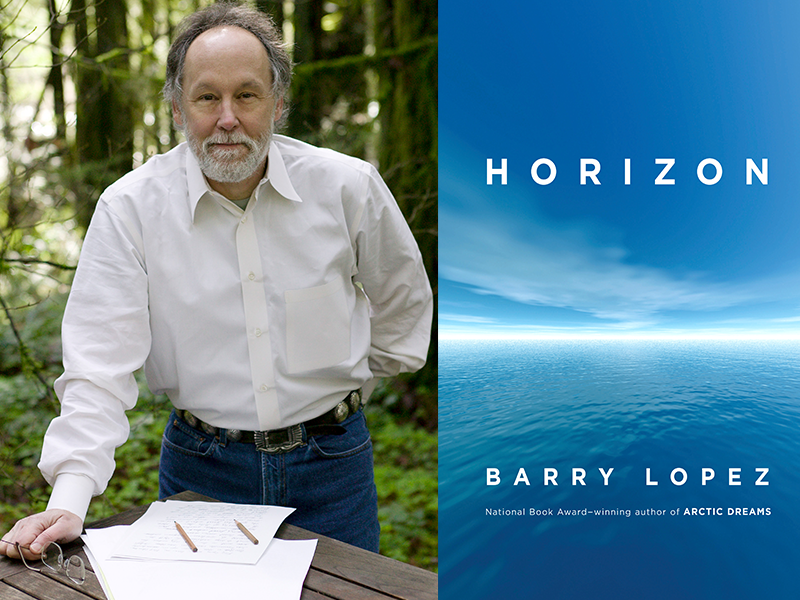 This event is free and open to the public. Sign up to receive more information and an event reminder:

Pulling from decades of lived experience for Horizon, Lopez explores the six regions of the world: from Western Oregon to the High Arctic; from the Galápagos to the Kenyan desert; from Botany Bay in Australia to the ice shelves of Antarctica. As he takes us on these myriad travels, Lopez probes the long history of humanity’s quests and explorations, including the prehistoric peoples who trekked across Skraeling Island in northern Canada, the colonialists who plundered Central Africa, an Enlightenment-era Englishman who sailed the Pacific, a Native American emissary who found his way into isolationist Japan, and today’s ecotourists in the tropics.

Horizon is a revelatory, epic work that voices concern and frustration along with humanity and hope—a book that makes you see the world differently.

“This book is a map to treasures everywhere buried.” —Jane Hirshfield
“Nobody journeys like Barry Lopez. He’s humble, he’s ethical, he’s honest, he’s curious, he’s doubtful, he’s properly sad and he’s wild. . .This is an epic book that goes from pole to pole, and yet manages to make a distinct ‘everywhere’ out of each little patch he visits. A glorious book, gloriously told.” —Colum McCann
“A celebration and investigation of the impulse to explore, Horizon is itself an exploration—of both the human and inhuman worlds. In his intensity, his clarity, and his capacity for wonder, Barry Lopez is unmatched.” —Elizabeth Kolbert

k you to the following parters for supporting this event: