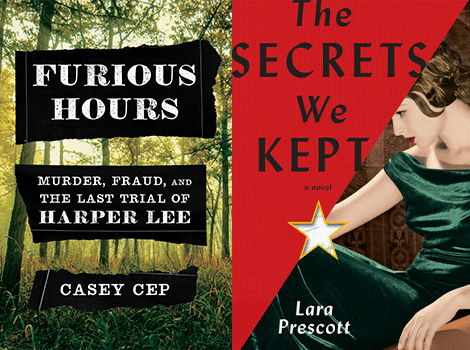 Between the Lines: Harper Lee and Boris Pasternak

Murder, espionage, and two of the greatest writers of the twentieth century: Harper Lee and Boris Pasternak. Two new books combine the real-life stories: behind the book Harper Lee never wrote, and one of the greatest love stories of the twentieth century, Doctor Zhivago. In the 1970s, Harper Lee traveled back to her native Alabama with the idea of writing her own In Cold Blood. In Furious Hours, Casey Cep brings this story to life, from the shocking murders to the courtroom drama to the racial politics of the Deep South. At the same time, she offers a deeply moving portrait of one of the country’s most beloved writers and her struggle with fame, success, and the mystery of artistic creativity. An instant bestseller, Lara Presecott’s The Secrets We Kept is a thrilling tale of secretaries turned spies, of love and duty, and of sacrifice–inspired by the true story of the CIA plot to infiltrate the hearts and minds of Soviet Russia, not with propaganda, but with the greatest love story of the twentieth century: Doctor Zhivago. Moderated by Pamela Paul of The New York Times.