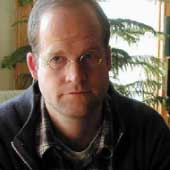 Cartoonist Chris Ware’s latest book, Building Stories, was named one of the New York Times 10 Best Books of 2012 and Top Ten Fiction Books of the Year by TIME magazine. His book Jimmy Corrigan: The Smartest Kid on Earth won the Guardian First Book Award and was listed as one of the “100 Best Books of the Decade” by The Times (London) in 2009. Ware is also a frequent contributor to the New Yorker and the Virginia Quarterly Review. His original artwork has also been displayed in the Smithsonian’s Cooper Hewitt Museum and he was the first cartoonist to be included in the Whitney Museum of American Art Biennial Exhibition. Dave Eggers says Ware’s work is “at once the most elaborate and the most controlled example of the comics medium yet produced” and Rick Moody calls Building Stories “a masterpiece.” Ware himself claims Charles Schultz and Joseph Cornell as influences, and says that “by learning from and looking at artists I admired and whom I thought came closest to getting at what seemed to me to be the ‘essence’ of comics, which is fundamentally the weird process of reading pictures, not just looking at them.” Chris Ware will be in conversation with his Random House editor, Chip Kidd, a book designer and author of several books about comics, including Peanuts: The Art of Charles M. Schulz.