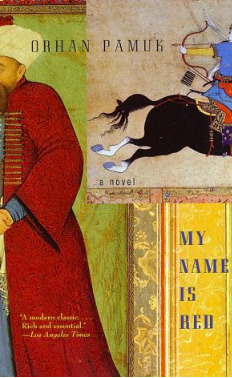 This Delve explores two pivotal examples of historical fiction in contemporary Turkish literature, Elif Shafak’s The Forty Rules of Love: A Novel of Rumi (2009) and Orhan Pamuk’s My Name is Red (2001). Shafak’s novel transports the reader to the golden age of the Anatolian city Konja, the capital of the Seljuk Sultanate in the mid 13th century.

Among the many refugees who settled in this cultural crossroads was the family of Mevlana Celaleddin Rumi, the mystic poet and the founder of the Mevlevi order. By way of moving along two temporal trajectories, Rumi’s 13th century and contemporary Boston, Massachusetts, The Forty Rules of Love constructs love stories that are both particular and universal.

Like Shafak, Pamuk experiments in My Name is Red with multiple genres. His novel is all at once a murder mystery, a reflection on visual arts, a romantic love story, and a philosophical musing on representation. My Name is Red takes the reader to the Ottoman Empire of 1591 and the ateliers of the miniaturists at the court of Sultan Murat III. Within the frame of historical fiction, Pamuk displays themes and tropes, central to his oeuvre, such as, the negotiation of identities between East and West (miniature versus portraiture), tradition and modernity, and the epistemology of story telling.

Both novelists draw particular attention to the disparities between the male and female voices regarding the construction of truth.

The Forty Rules of Love: A Novel of Rumi by Elif Shafak
My Name is Red by Orhan Pamuk
Selections from The Essential Rumi will complement the readings.

Ülker Gökberk is Professor Emerita of German and Humanities at Reed College. She earned her Ph.D. in Germanics at the University of Washington (1986) and her M.A. and B.A. degrees in Philosophy at the University of Istanbul. She has been at Reed since 1986. Her forthcoming book is titled Excavating Memory: Bilge Karasu’s Istanbul and Walter Benjamin’s Berlin.