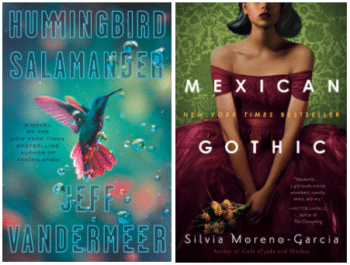 We’ve gathered two of America’s most visionary writers for this event. Jeff VanderMeer moves from fantasy to noir in his new novel, Hummingbird Salamander, in which security consultant “Jane Smith” receives an envelope with a key to a storage unit that holds a taxidermied hummingbird and clues leading her to a taxidermied salamander. Silvina, the dead woman who left the note, is a reputed ecoterrorist and the daughter of an Argentine industrialist. By taking the hummingbird from the storage unit, Jane sets in motion a series of events that quickly spin beyond her control. And in Silvia Moreno-Garcia’s bestelling novel Mexican Gothic, Noemí Taboada heads to High Place, a distant house in the Mexican countryside, after receiving a frantic letter from her newlywed cousin begging for someone to save her from a mysterious doom.

Moderator Kathy Blackwell is an executive editor for Texas Monthly. Before joining the National Magazine of Texas, the South Carolina native worked at metro daily newspapers including The Orlando Sentinel and The Austin American-Statesman. She lives in Central Austin with her husband, son, and dog. She’s a lecturer at the Moody College of Communication at the University of Texas.

Jeff VanderMeer is an award-winning novelist and editor. His fiction has been translated into twenty languages and has appeared in the Library of America’s American Fantastic Tales and multiple year’s best anthologies. He writes nonfiction for The Washington Post, The New York Times Book Review, the Los Angeles Times, and The Guardian, among others. He grew up in the Fiji Islands and now lives in Tallahassee, Florida, with his wife. Jeff is the author of Borne and The Southern Reach Trilogy.

Silvia Moreno-Garcia is the New York Times bestselling author of the critically acclaimed speculative novels Gods of Jade and Shadow, Signal to Noise, Certain Dark Things, and The Beautiful Ones; and the crime novel Untamed Shore. She has edited several anthologies, includ­ing the World Fantasy Award–winning She Walks in Shadows (aka Cthulhu’s Daughters). She lives in Vancouver, British Columbia.

Ticket purchase of VanderMeer’s new novel Hummingbird Salamander is required through SABF’s event registration page to attend this event. Both bookS are available for purchase from San Antonio’s NOWHERE BOOKSHOP.