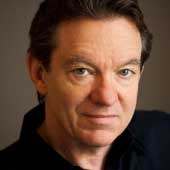 Lawrence Wright is a staff writer for the New Yorker and the author of nine books, including the best seller The Looming Tower: Al-Qaeda and the Road to 9/11, which won the Pulitzer Prize. His most recent book is Going Clear: Scientology, Hollywood and the Prison of Belief. Newsday called it “a gripping, exhaustive, remarkably evenhanded investigation of the religion everyone loves to hate.” Wright has been at the New Yorker since 1996 and has written stories on controversial subjects such as cult leader Jim Jones, “recovered” memories, 9/11, the FBI, and Manuel Noregia. His article, “The Man Behind Bin Laden” won a National Magazine Award. Wright says, “I write about things I’m drawn to. If I’m interested in  it, I think I can make other people interested, too.”