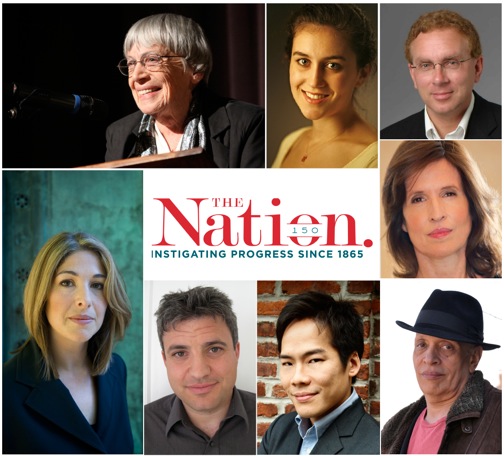 The Nation LIVE! (SOLD OUT)

This event is SOLD OUT at all seating levels.

Sign up for our monthly e-newsletter to be among the first to know when our events go on sale.

The year 2015 marks the 150th anniversary of The Nation, the oldest weekly magazine in the country. From groundbreaking investigative journalism, to cutting-edge cultural commentary, to unmatched political analysis, The Nation has been at the forefront of American politics and culture since its inception by a young group of abolitionists months after the assassination of President Lincoln.

Join Literary Arts for this celebration of The Nation‘s longstanding legacy of instigating progress. Hear some of our country’s most inspiring truth-tellers channeling the past, limning the present and looking toward the future: Walter Mosley, Naomi Klein, Ursula Le Guin, Richard Kim, Katrina vanden Heuvel, Zoe Carpenter, Dave Zirin and John Nichols. Don’t miss this historic opportunity to experience the magazine that Harry Belafonte says “has brought to the table of human need a menu of truth.”

Learn more about The Nation’s 150th anniversary  plans across the country at thenation.com/events.

In addition to attending this event, take advantage of The Nation’s special 150th anniversary offer: $15 for a six-month subscription to The Nation and a copy of the commemorative issue.

This event is made possible by the following sponsors and media partners: