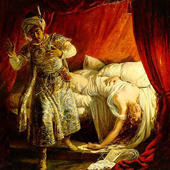 THIS SEMINAR IS SOLD OUT

Shakespeare’s Othello continues to intrigue over 400 years after it was written. We will spend two sessions reading and exploring the intertwined lives of Othello, Desdemona, Cassio, Emilia, and Iago, and tracing the currents of love, jealousy, evil, racism, and betrayal. After attending Portland Center Stage’s production, we will share impressions and interpretations in our final meeting.

Note: Participants in this seminar will receive a complimentary ticket to Portland Center Stage’s evening performance of Othello on Wednesday, April 16, 2014.

Guide: Gemma Whelan is the founding artistic director of corrib theatre, a new company devoted to bringing Irish theatre to Portland.Since her move to Portland in 2008, she has taught at Pacific University, Portland Actors Conservatory, and Portland State University. Her first novel, Fiona: Stolen Child was published in 2010. She directed corrib’s inaugural production of St. Nicholas in spring 2013, and is currently directing the world premiere of Ithaka at Artists Repertory Theatre.