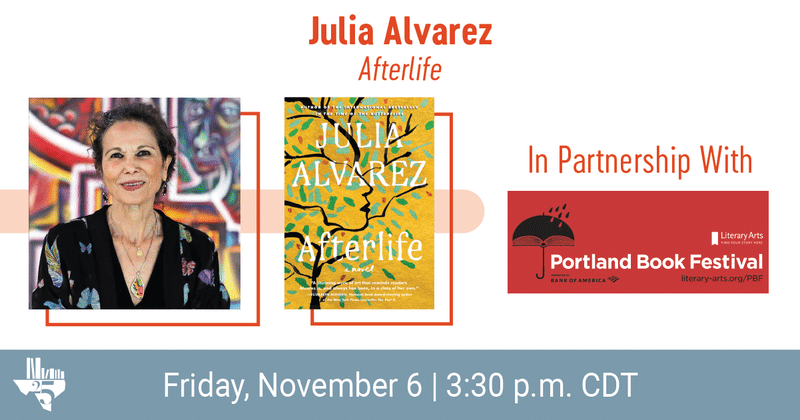 In Afterlife, National Medal of Arts winner Julia Alvarez’s first adult novel in nearly fifteen years, character Antonia Vega’s life just got a lot more complicated. She expected her retirement from teaching college-level English to bring peace, quiet, and plenty of time to read. Instead, her husband has unexpectedly passed away, her sister has vanished, and a pregnant teenager has appeared at her door. Join us for a conversation with Julia about Afterlife, a book which is in part about managing when just about everything goes wrong.

Julia Alvarez left the Dominican Republic for the United States in 1960 at the age of ten. She is the author of six novels, three books of nonfiction, three collections of poetry, and eleven books for children and young adults. She has taught and mentored writers in schools and communities across America and, until her retirement in 2016, was a writer-in-residence at Middlebury College. Her work has garnered wide recognition, including a Latina Leader Award in Literature from the Congressional Hispanic Caucus Institute, the Hispanic Heritage Award in Literature, the Woman of the Year by Latina magazine, and inclusion in the New York Public Library’s program “The Hand of the Poet: Original Manuscripts by 100 Masters, from John Donne to Julia Alvarez.” In the Time of the Butterflies, with over one million copies in print, was selected by the National Endowment for the Arts for its national Big Read program, and in 2013 President Obama awarded Alvarez the National Medal of Arts in recognition of her extraordinary storytelling. Her latest book is Afterlife.

Julia Alvarez is appearing through a partnership with the TEXAS BOOK FESTIVAL. Purchase Afterlife from BookPeople, an independent bookstore based in Austin HERE.