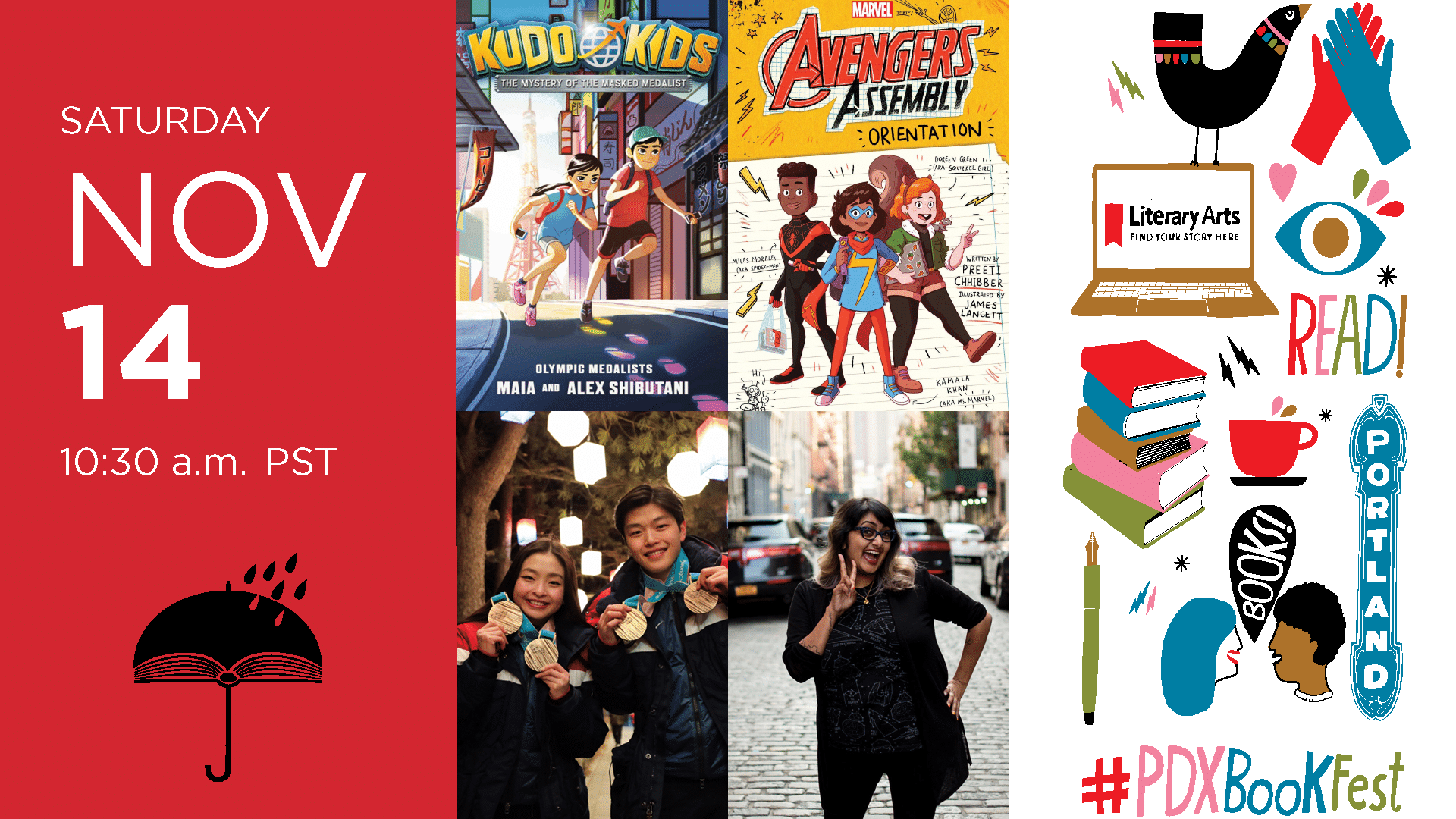 The beginning of two great middle grade series! It’s time to team up at the Avengers Institute and the Tokyo Olympics…

In Preeti Chhibber’s Avengers Assembly #1: Orientation, Kamala Khan, aka Ms. Marvel, is the new kid at the Avengers Institute. The big news this year is an academic decathlon, and Kamala teams up with her friends Miles Morales (aka Spider-Man) and Doreen Green (aka Squirrel Girl) agains a team led by some kids who fight less than fair.

Moderated by Heidi Schulz, author of Hook’s Revenge and Giraffes Ruin Everything.

ALL BOOKS PURCHASED THROUGH FESTIVAL EVENTS, FROM ANNIE BLOOM’S BOOKS, BROADWAY BOOKS, GREEN BEAN BOOKS, OR POWELL’S BOOKS SUPPORT THE AUTHORS AND PUBLISHERS WHO SHARE THEIR WORK AT THE FESTIVAL AND THE BOOKSELLERS WHO HAVE WORKED HARD TO KEEP THEIR BUSINESSES OPEN DURING THESE DIFFICULT TIMES. BY PURCHASING BOOKS from these stores YOU ARE SUPPORTING THE SUSTAINABILITY OF THE FESTIVAL.

Preeti Chhibber has written for SYFY, BookRiot, BookRiot Comics, The Nerds of Color, and The Mary Sue. She has work in the anthology A Thousand Beginnings and Endings, a collection of retellings of fairy tales and myths, and is the author of the Spider-Man: Far from Home tie-in Peter and Ned's Ultimate Travel Journal for Marvel. She hosts the podcasts Desi Geek Girls and Strong Female Characters (SYFYWire) and has appeared on several panels at New York Comic Con, San Diego Comic Con, and on screen on the SYFY Network.

Maia and Alex Shibutani (aka the ShibSibs) are two-time Olympic bronze medalists, three-time world medalists, Four Continents Champions, and two-time U.S. National Champions. At the 2018 Winter Olympics, they became the first ice dancers of Asian descent to medal at the Olympics and are only the second sibling duo in the history of the sport to share an ice dancing medal. Off the ice, the ShibSibs are known for sharing their personalities, experiences, and interests on social media to bring new audiences to their sport. They travel the world and enjoy spending time together (most of the time), eating food (all of the time), and meeting new people (any time!). The Mystery of the Masked Medalist is their first book.

New York Times Bestselling author and self-proclaimed giraffe suspicioner, Heidi Schulz, lies to children for fun and profit. She is best known for her bestselling novel for middle grade readers, Hook’s Revenge, published by Little Brown Books, and her picture book Giraffes Ruin Everything, published by Bloomsbury Kids. When she is not writing, Heidi can be found in her Salem, Oregon home attempting to corral her two unwieldy dogs, sewing herself yet another fit-and-flare dress, or working through her bottomless stack of nightstand books.