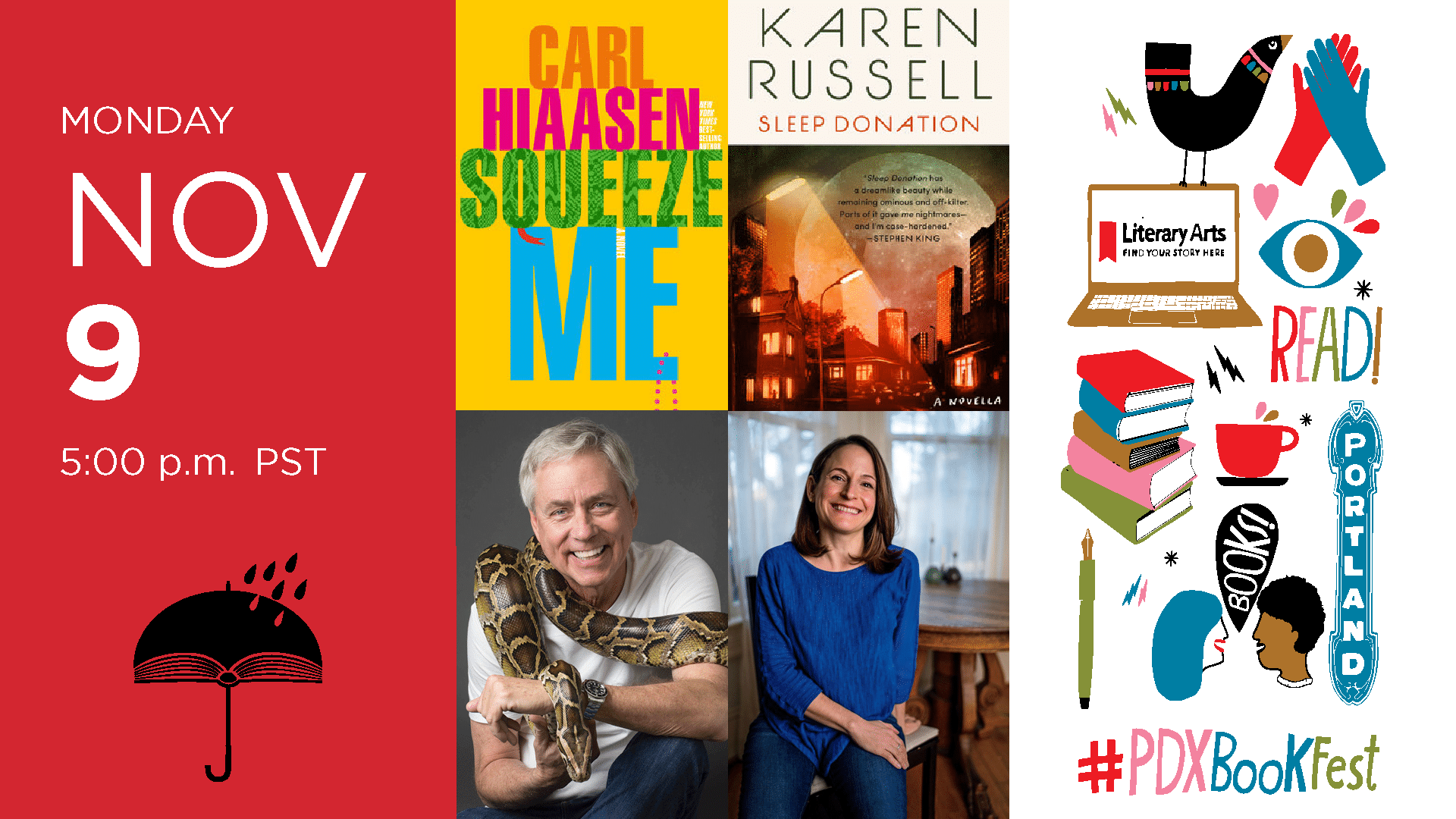 To view this event, go to: https://www.pdxbookfest.org/daily-live-stream/

From the best-selling author of Skinny Dip and Razor Girl, a hilarious new novel of social and political intrigue, set against the glittering backdrop of Florida’s gold coast.

It’s the height of the Palm Beach charity ball season: for every disease or cause, there’s a reason for the local luminaries to eat (minimally), drink (maximally), and be seen. But when a prominent high-society dowager suddenly vanishes during a swank gala, and is later found dead in a concrete grave, panic and chaos erupt. Kiki Pew was notable not just for her wealth and her jewels—she was an ardent fan of the Winter White House resident just down the road, and a founding member of the POTUSSIES, a group of women dedicated to supporting their President. Never one to miss an opportunity to play to his base, the President immediately declares that Kiki was the victim of rampaging immigrant hordes. This, it turns out, is far from the truth.

The truth might just lie in the middle of the highway, where a bizarre discovery brings the First Lady’s motorcade to a grinding halt (followed by some grinding between the First Lady and a love-struck Secret Service agent). Enter Angie Armstrong, wildlife wrangler extraordinaire, who arrives at her own conclusions after she is summoned to the posh island to deal with a mysterious and impolite influx of huge, hungry pythons…

Carl Hiaasen can brighten even the darkest of days and Squeeze Me is pure, unadulterated Hiaasen. Irreverent, ingenious, and highly entertaining, Squeeze Me perfectly captures the absurdity of our times.

Praise for squeeze me

“Squeeze Me is funny, but as with Hiaasen’s best work, it’s grounded in genuine outrage over the corruption that increasingly defines American political and cultural life. And it turns out there’s no better place to invoke that outrage than the wealthy swamps of Florida.” —Alex Shephard, The New Republic

All books purchased through festival events, FROM Annie Bloom’s Books, Broadway Books, Green Bean Books, or Powell’s Books, support the authors and publishers who share their work at the festival and the booksellers who have worked hard to keep their businesses open during these difficult times. by purchasing books at these bookstores you are supporting the sustainability of the festival.

Tickets are not available as this event has passed.
+ Google Calendar+ iCal Export

Carl Hiaasen was born and raised in Florida. He is the author of fourteen previous novels, including the best sellers Bad Monkey, Lucky You, Nature Girl, Razor Girl, Sick Puppy, Skinny Dip, and Star Island, as well as six best-selling children’s books, Hoot, Flush, Scat, Chomp, Skink, and Squirm. His most recent work of nonfiction is Assume the Worst, a collaboration with the artist Roz Chast.

Purchase Squeeze Me from Broadway Books, one of our Portland-based, independent bookstore partners HERE.

Karen Russell won the 2012 and the 2018 National Magazine Award for fiction, and her first novel, Swamplandia! (2011), was a finalist for the Pulitzer Prize. She has also written Orange World and, most recently, Sleep Donation. She has received a MacArthur Fellowship and a Guggenheim Fellowship, the "5 under 35" prize from the National Book Foundation, the NYPL Young Lions Award, the Bard Fiction Prize, and is a former fellow of the Cullman Center and the American Academy in Berlin. She currently holds the Endowed Chair at Texas State University's MFA program, and lives in Portland, Oregon with her husband and son.