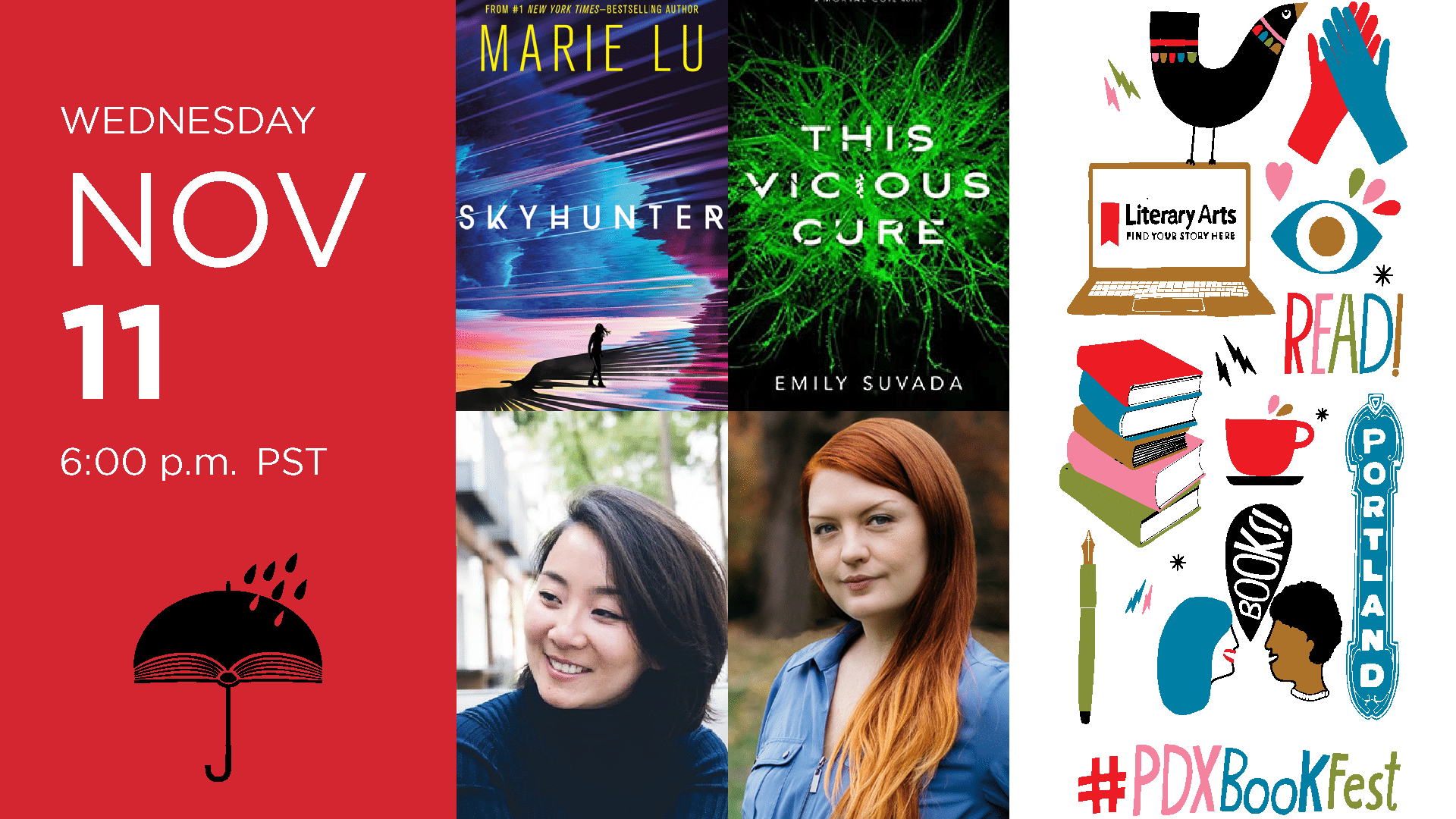 #1 New York Times-bestselling author Marie Lu is back with Skyhunter, an adrenaline-laced novel about the lengths one warrior will go to fight for freedom and those she loves. Marie Lu will be in conversation with Emily Suvada, author of the This Mortal Coil trilogy.

Talin is a Striker, a member of an elite fighting force that stands as the last defense for the only free nation in the world: Mara.

A refugee, Talin knows firsthand the horrors of the Federation, a world-dominating war machine responsible for destroying nation after nation with its terrifying army of mutant beasts known only as Ghosts.

But when a mysterious prisoner is brought from the front to Mara’s capital, Talin senses there’s more to him than meets the eye. Is he a spy from the Federation? What secrets is he hiding?

Only one thing is clear: Talin is ready to fight to the death alongside her fellow Strikers for the only homeland she has left . . . with or without the boy who might just be the weapon to save—or destroy—them all.

ALL BOOKS PURCHASED THROUGH FESTIVAL EVENTS, FROM ANNIE BLOOM’S BOOKS, BROADWAY BOOKS, GREEN BEAN BOOKS, OR POWELL’S BOOKS, SUPPORT THE AUTHORS AND PUBLISHERS WHO SHARE THEIR WORK AT THE FESTIVAL AND THE BOOKSELLERS WHO HAVE WORKED HARD TO KEEP THEIR BUSINESSES OPEN DURING THESE DIFFICULT TIMES. BY PURCHASING BOOKS YOU ARE SUPPORTING THE SUSTAINABILITY OF THE FESTIVAL.

Marie Lu is the #1 New York Times–bestselling author of the Legend series, The Young Elites trilogy, Batman: Nightwalker, and the Warcross series. She graduated from the University of Southern California and jumped into the video game industry, where she worked as an artist. Now a full-time writer, she spends her spare hours reading, drawing, playing games, and getting stuck in traffic. She lives in the traffic-jam capital, Los Angeles, with her illustrator/author husband, Primo Gallanosa, their Pembroke Welsh corgi, and their Chihuahua-monster mix.

Purchase Skyhunter from Powell's Books, one of our Portland-based, independent bookstore partners HERE.

Emily Suvada was born and raised in Australia, where she went on to earn a degree in mathematics. She previously worked as a data scientist, and still spends hours writing algorithms to perform tasks which would only take her minutes to complete on her own. When not writing, she can be found hiking, cycling, and conducting chemistry experiments in her kitchen. The third book in her This Mortal Coil series, This Vicious Cure, was released in winter 2020. She currently lives in Portland, Oregon, with her husband and son.

Purchase this Vicious Cure from Powell's Books, one of our Portland-based, independent bookstore partners HERE.