To view this event, go to: https://www.pdxbookfest.org/daily-live-stream/ 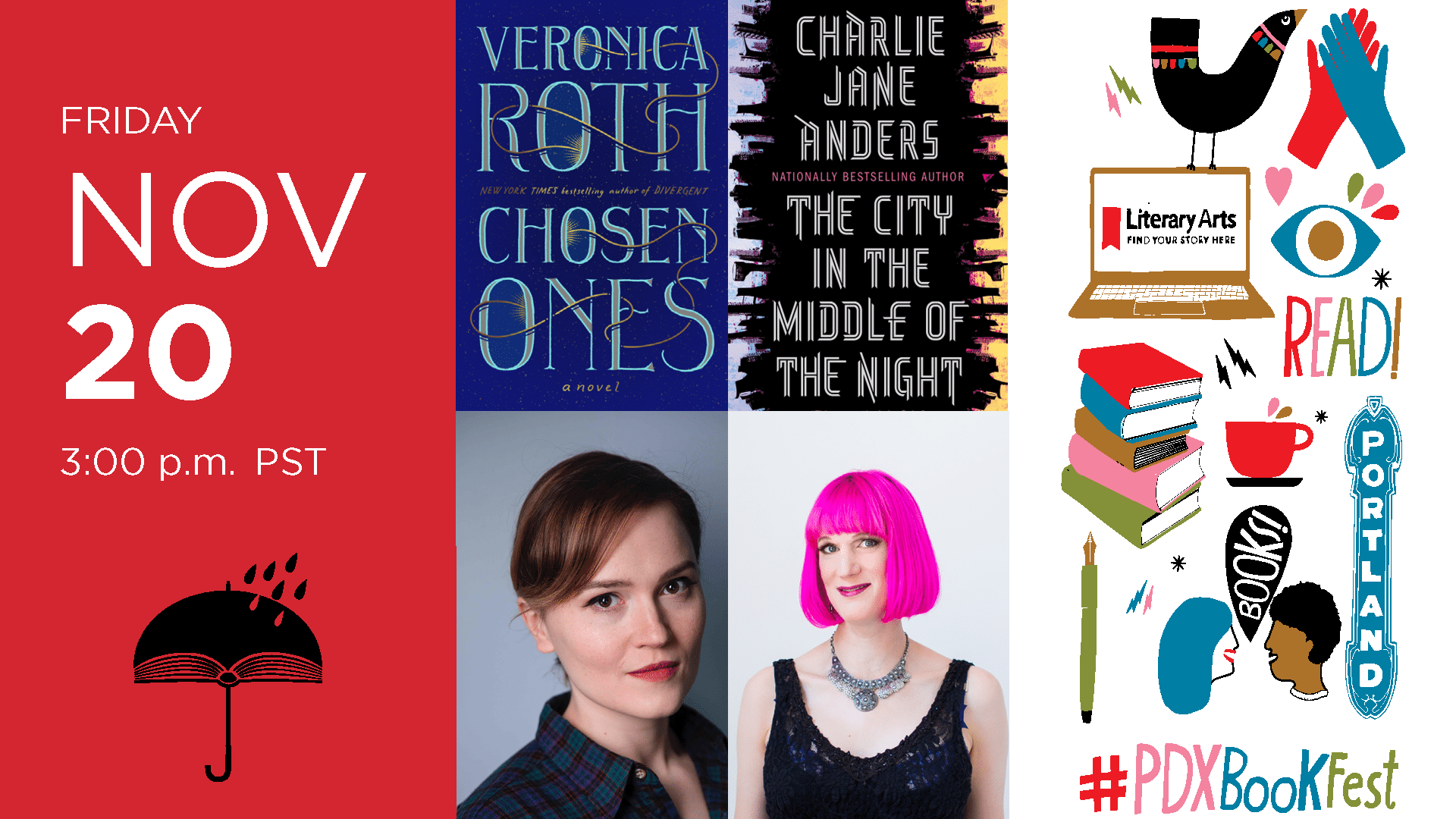 Best-selling author Veronica Roth discusses her new book, and first for adults, Chosen Ones, with author Charlie Jane Anders (The City in the Middle of the Night).

“Chosen Ones by Veronica Roth is the cure for all those humdrum ‘one true savior’ narratives. This dark, complex novel rocked my heart and left me with a renewed sense that saving the world is a job that never ends. Roth’s version of magic is as flawed and fascinating as her characters, and her story keeps you guessing until the wild conclusion. You’ll never look at fantasy heroes the same way again.”
—Charlie Jane Anders, Hugo & Nebula Award winning author of The City in the Middle of the Night

The masterful first novel for adults from the mega-selling author of the Divergent franchise.

“A stunning thriller/fantasy/sci-fi chimera like nothing I’ve read before.” —Blake Crouch

“A hugely imagined, twisty, turning tale that leads through the labyrinths of magic and war to the center of the heart.” —Diana Gabaldon

Fifteen years ago, five ordinary teenagers were singled out by a prophecy to take down an impossibly powerful entity wreaking havoc across North America. He was known as the Dark One, and his weapon of choice—catastrophic events known as Drains—leveled cities and claimed thousands of lives. Chosen Ones, as the teens were known, gave everything they had to defeat him.

After the Dark One fell, the world went back to normal . . . for everyone but them. After all, what do you do when you’re the most famous people on Earth, your only education was in magical destruction, and your purpose in life is now fulfilled?

Of the five, Sloane has had the hardest time adjusting. Everyone else blames the PTSD—and her huge attitude problem—but really, she’s hiding secrets from them . . . secrets that keep her tied to the past and alienate her from the only four people in the world who understand her.

On the tenth anniversary of the Dark One’s defeat, something unthinkable happens: one of the Chosen Ones dies. When the others gather for the funeral, they discover the Dark One’s ultimate goal was much bigger than they, the government, or even prophecy could have foretold—bigger than the world itself.

And this time, fighting back might take more than Sloane has to give.

Purchase Chosen Ones | THE CITY IN THE MIDDLE OF THE NIGHT

All books purchased through festival events, FROM Annie Bloom’s Books, Broadway Books, Green Bean Books, or Powell’s Books, support the authors and publishers who share their work at the festival and the booksellers who have worked hard to keep their businesses open during these difficult times. by purchasing books from these bookstores you are supporting the sustainability of the festival.

Veronica Roth is the #1 New York Times best-selling author of the Divergent series (Divergent, Insurgent, Allegiant, and Four: A Divergent Collection), the Carve the Mark duology (Carve the Mark, The Fates Divide), and many short stories and essays. Her most recent book is her debut adult novel Chosen Ones (The Chosen Ones, #1).

Purchase Chosen Ones from Annie Bloom’s Books, one of our Portland-based, independent bookstore partners HERE.

Charlie Jane Anders is the former editor-in-chief of io9.com, the popular Gawker Media site devoted to science fiction and fantasy. She is the author of the highly acclaimed science fiction novel The City in the Middle of the Night. Her debut novel, All the Birds in the Sky, won the Nebula Award for Best Novel and was a Hugo Award finalist. She has won Hugo Awards for her story "Six Months, Three Days"  and her podcast, Our Opinions Are Correct. She has also had fiction published by McSweeney's, Lightspeed, and ZYZZYVA. Her journalism has appeared in Salon, the Wall Street Journal, Mother Jones, and many other outlets. Her first YA book, Victories Greater Than Death is due out in April from Tor Teen.
ARC GIVEAWAY! Attendees of the Chosen Ones: Veronica Roth & Charlie Jane Anders event will be able to enter for a chance to receive an Advance Reader Copy of Anders' upcoming book Victories Greater Than Death. The giveaway will go live here on November 19th at 10:00 a.m.!

Purchase the City in the Middle of the Night from Annie Bloom's Books, one of our Portland-based, independent bookstore partners HERE.