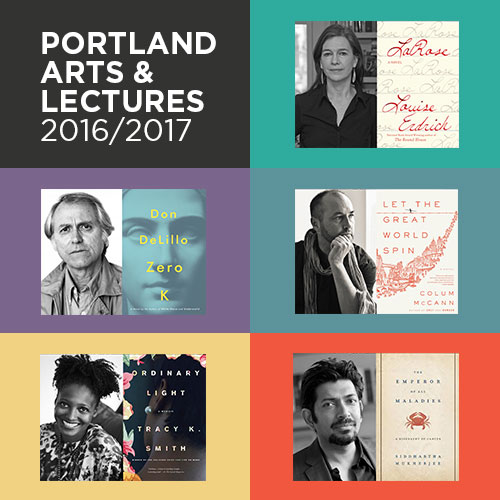 The 32nd season of Portland Arts & Lectures features some of the most influential writers at work today. They are novelists, essayists, screenwriters, and poets who have won the most prestigious awards in their profession.

The five-part subscription series begins on October 20 with Louise Erdrich, whose most recent novel, LaRose, is the conclusion of a loose trilogy that includes National Book Award winner The Round House and Pulitzer Prize finalist The Plague of Doves.

“I approach the work as though, in truth, I’m nothing and the words are everything. Then I write to save my life. If you are a writer, that will be true. Writing has saved my life.” —Louise Erdrich

The series continues on November 17 with Don DeLillo, the author of 16 novels including the National Book Award-winning White Noise. Irish writer Colum McCann, whose novel Let the Great World Spin won the National Book Award and the Dublin Impac International Prize, will join us on January 12. Poet Tracy K. Smith, author of the critically acclaimed memoir Ordinary Light, a finalist for the 2015 National Book Award, and the Pulitzer Prize-winning collection Life on Mars, will speak on February 16. The series will conclude on April 11 with physician, scientist, and writer Siddhartha Mukherjee, best known for Pulitzer Prize-winning book The Emperor of All Maladies.