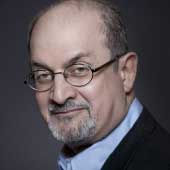 Salman Rushdie is the celebrated international author of eleven novels. An inventive stylist whose work combines elements of myth and magical realism, Nadine Gordimer calls him “The most original imagination writing today.” His works include the Booker Award winner Midnight’s Children and The Satanic Verses, the book that resulted in a fatwa issued from Ayatollah Khomeini, sentencing him to death. Following the fatwa, Rushdie remained in hiding for 15 years. His recently published memoir, Joseph Anton, takes its title from the assumed name Rushdie traveled under during that time. Michiko Kakutani has called it “a harrowing, deeply felt and revealing document: an autobiographical mirror of the big, philosophical preoccupations that have animated Mr. Rushdie’s work throughout his career.”