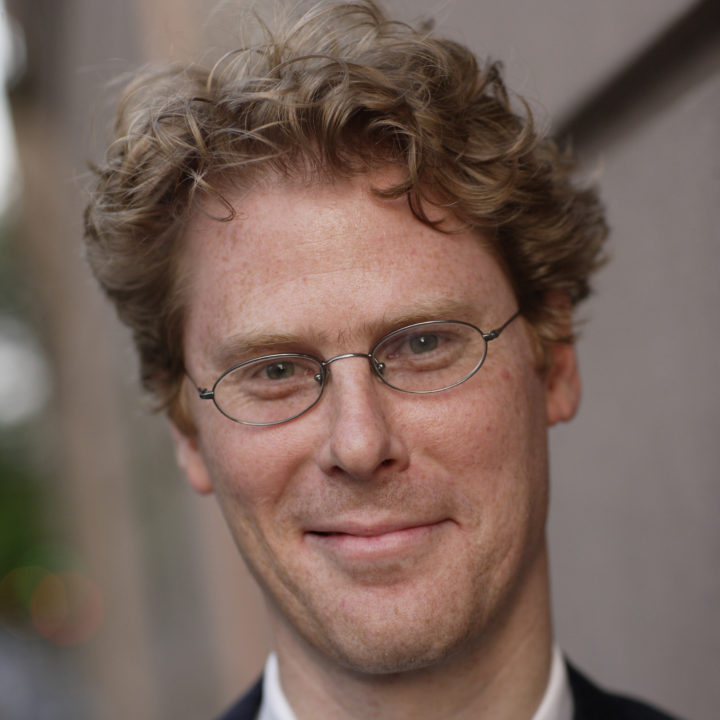 Andrew has been the director of Literary Arts since 2009. Born and raised in Canada, Proctor, earned a bachelor’s degree in English and Music at Concordia University in Montreal, and later worked in London for the Cultural Attaché to the Canadian High Commission. In the UK, he also earned an MA in English Literature at the University of East Anglia under the supervision of England’s then Poet Laureate, Andrew Motion. From 2000-2004 Proctor worked as an editor for HarperCollins in New York City and then as the Membership and Operations Director of the PEN American Center, a global literary and human rights organization focused on the welfare of writers and editors. In total, Proctor has worked in the literary world for over twenty years in the governmental, for profit, and nonprofit sectors. 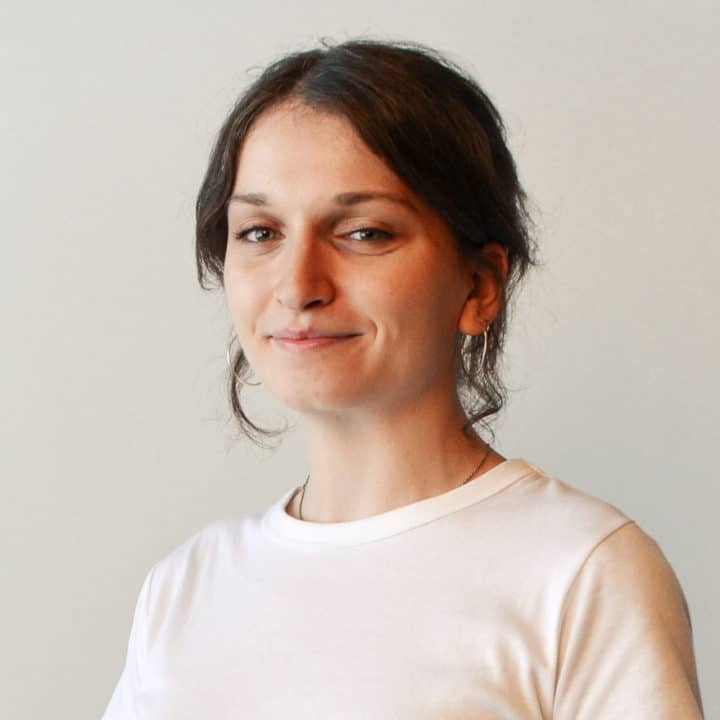 Sophie Albanis is the Executive and Office Assistant at Literary Arts, where she supports the organization’s Director and staff by coordinating projects, communications, and operations. Sophie graduated from the University of Oregon’s Clark Honors College with a degree in Women’s & Gender Studies and minors in English and Nonprofit Administration. Prior to Literary Arts, Sophie worked at Powell’s City of Books and interned at Tin House, Oregon Public Broadcasting, and Planned Parenthood clinics in Oregon and New York City. She is a weekly volunteer at the Independent Publishing Resource Center and the former editor in chief of The Siren feminist magazine. Outside of the office, she is a freelance researcher and editor at work on her first chapbook. A second-generation immigrant, Sophie was born and raised in Portland. 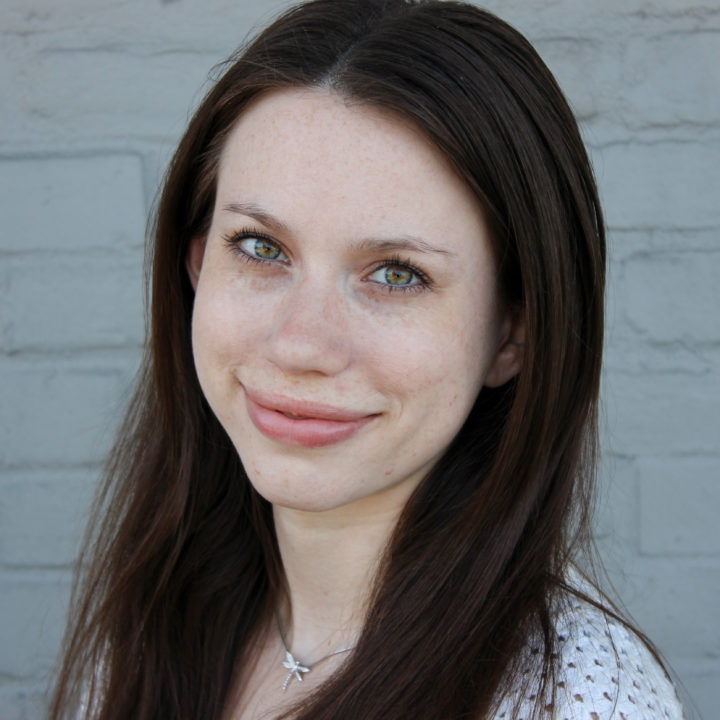 Maggie is the Development Manager for Literary Arts where she manages the organization’s grant applications and reports and acts as one of the organization’s copyeditors. Prior to Literary Arts, Maggie served a year with AmeriCorps VISTA at College Possible Portland. In her free time, she rock climbs, hikes, and volunteers as a mentor for Urban Nature Partners PDX. 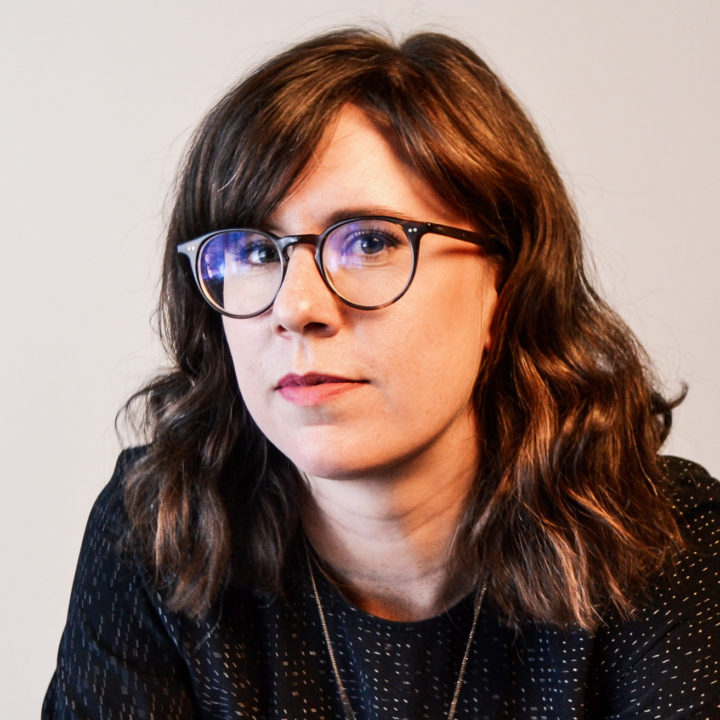 Amanda joined Literary Arts in 2015 to relaunch the Portland Book Festival. As director of public programs, she also produces Portland Arts & Lectures and special events. Prior to joining Literary Arts, she was the director of public programming at Housing Works Bookstore Cafe, a nonprofit social enterprise in downtown New York City, where she curated, publicized, and produced 200+ events annually. She is the co-founder of the Moby-Dick Marathon NYC, and has worked in book production at Random House and as a bookseller. She’s always happy to recommend a book or talk about what you’re reading. 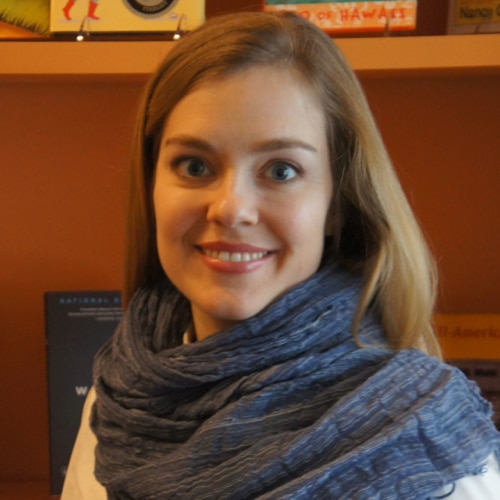 Lydah is responsible for all earned and contributed income for Literary Arts, and acts as second in charge and works in concert with the Executive Director to set the strategic direction of the organization. With 15 years of sales and marketing experience, Lydah designs and implements fundraising strategies to meet budget goals for individual, corporate, foundation, and government sources. Prior to joining Literary Arts in 2012, Lydah had extensive experience in the New York publishing industry, working as National Accounts Manager for Penguin Young Readers Group, Simon & Schuster, and Random House. 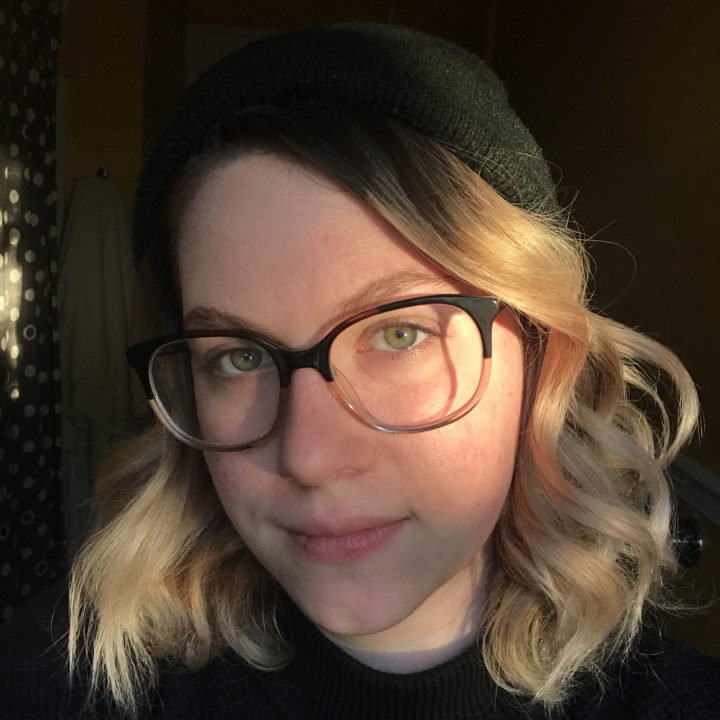 Alanna helps establish branding for individual programs, manage social media, and create much of the organization’s print and digital collateral. She believes art is integral to economic and social justice, and is a member of Literary Arts’ Diversity, Equity, and Inclusion workgroup. Her interest in this work comes from personal experience and was deepened through her involvement with nonprofit arts organizations like the Leeway Foundation and Blackstar Film Festival. She is a speculative fiction writer, multidisciplinary visual artist, and alumni of the Clarion Science Fiction & Fantasy Writers Workshop and Tin House Summer Writers Workshop. Her fiction has appeared in Nightmare Magazine. See her work at www.alannafaelan.com. 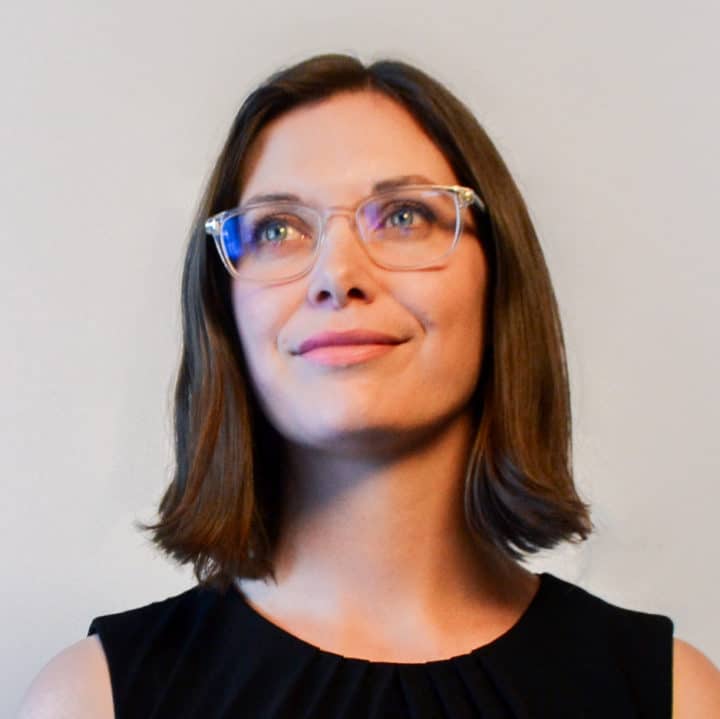 Jennifer became involved with Literary Arts in 2007 as a work-study student. Now as the Ticketing & Data Specialist, she facilitates and reports on all earned income aspects of the organization, including Portland Arts & Lectures, the largest literary series in the country. She also ensures the accuracy of constituent information in the Literary Arts database. Her favorite part of her work is audience outreach and development at ticketed events, where she helps strengthen community engagement.

Jennifer holds a BA from Lewis & Clark College. A seventh-generation Oregonian, she enjoys listening to audiobooks and spending time with her husband, daughter, and cat. 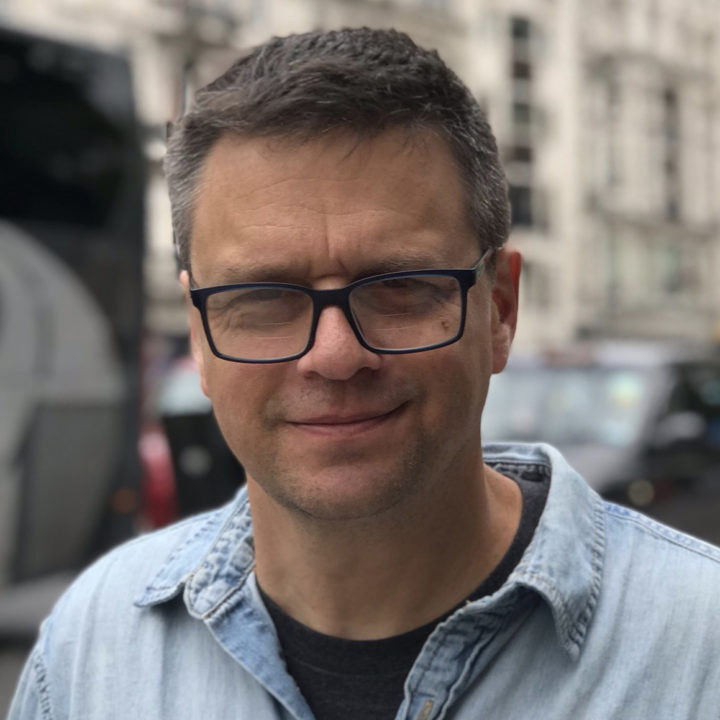 Hunt is a program specialist for Literary Arts’ Youth Programs. He welcomes student groups to Literary Arts events at the Arlene Schnitzer Concert Hall, including Portland Arts & Lectures, the Everybody Reads author events, and Verselandia. Prior to that he taught creative writing with the Writers in the Schools program. 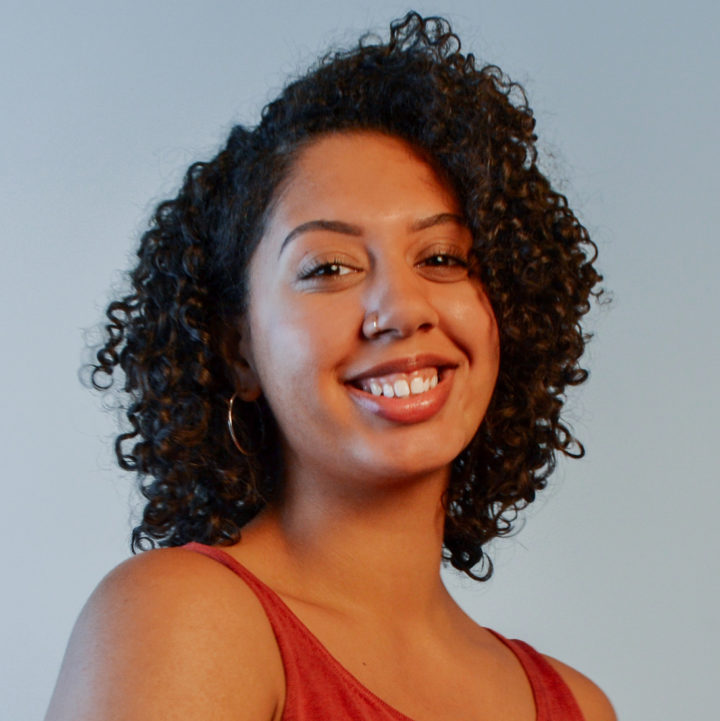 Olivia was born and raised in Portland, with the exception of some time in Newbridge, Ireland, Oberlin, Ohio, and Astoria, Oregon. At Literary Arts, she works in Youth Programs, coordinating student readings and college essay mentoring sessions, donating books to classrooms, helping get students to author events at the Schnitz, and curating the annual Writers in the Schools anthology of student work, among other things. Her favorite book is Love in the Time of Cholera. The book she’s read the most is The Girl with the Dragon Tattoo, and she wishes the English translation had the original title. She doesn’t like dust jackets, and listens to true crime podcasts while she works. 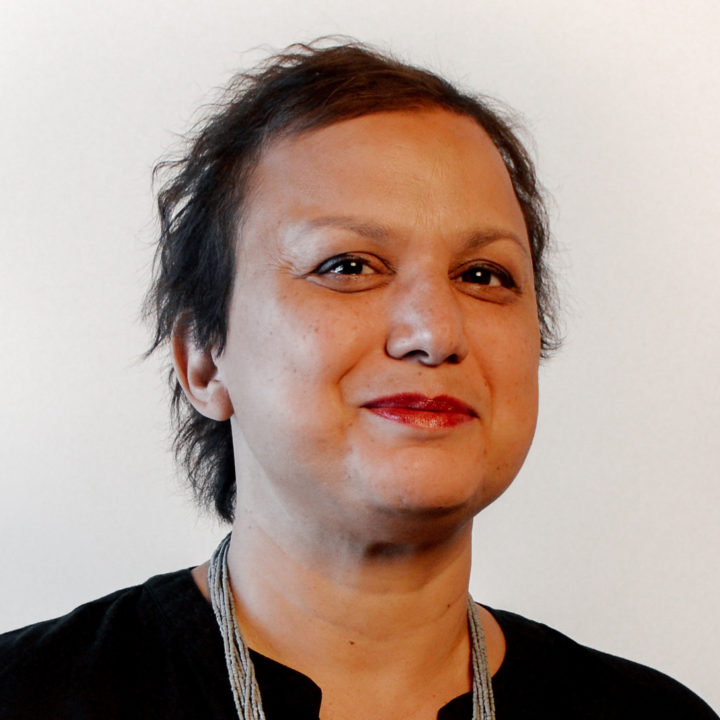 Ramiza is the author of The Royal Abduls, forthcoming in 2020 from Forest Avenue Press. She has an MFA from Sarah Lawrence College and her fiction and nonfiction has appeared in publications such as Columbia Review, Lumina, Washington Square Review, and Mutha Magazine. She has been a fellow at both MacDowell Colony and Blue Mountain Center. Her father was born in Fiji, her mother in Texas, and she was born in California. She currently works as Director of Youth Programs at Literary Arts in Portland, Oregon. 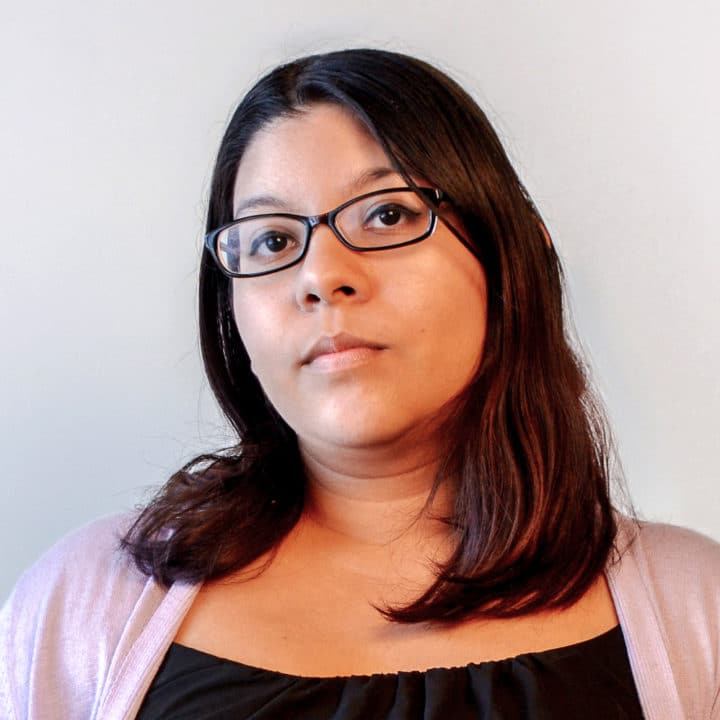 Allegra is the Development Coordinator at Literary Arts where she dedicates her time to processing all the gifts from the organization’s generous donors and ensuring they receive their tax receipts. You’re also likely to see her at all of Literary Arts’ events, staffing the information table and talking about our organization. For any questions regarding donations or tax receipts, please contact her at allegra [at] literary-arts.org.

When she’s not working, Allegra enjoys working on her novel, blogging, and writing short scripts for her friend’s production company where she manages the other script writers and occasionally directs. Her favorite book is The Grey King by Susan Cooper. 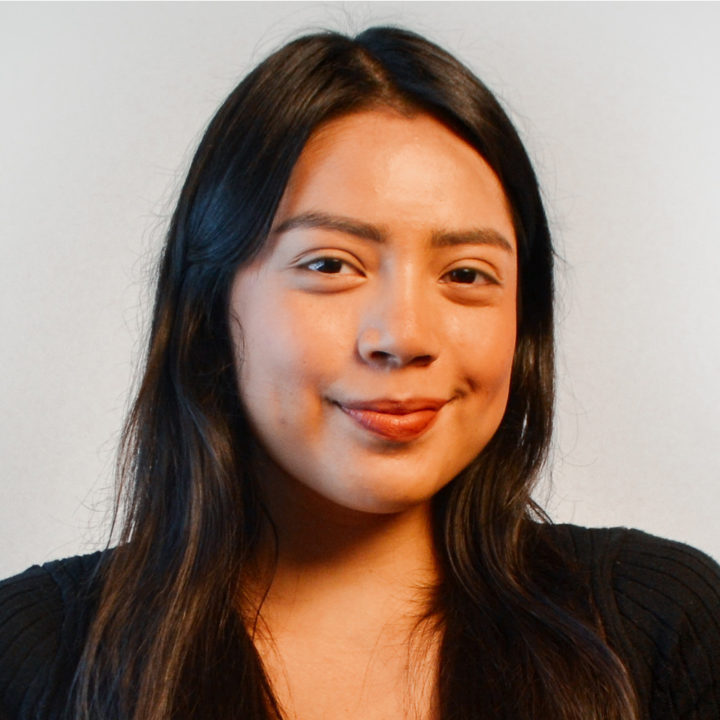 Jessica is the Program Assistant for Programs for Writers at Literary Arts. Her program is comprised of the Oregon Book Awards, Oregon Literary Fellowships, Delve Readers Seminars, Writing Classes, and @Literary Arts Events. Her favorite part about working with this program is getting to serve as a resource to anyone who wishes to become more involved with the Portland literary community, be it through a formalized class or seminar, free public events, or applying for our fellowships.

Prior to her role at Literary Arts, Jessica worked as a Writing Consultant, an English Teacher, and a Sales Associate for a vintage buy and sell boutique—which is to say she appreciates a good essay as much as she does a good pair of vintage denim. She earned a double B.A. in English and Politics from Willamette University. 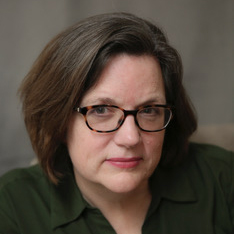 Susan Moore is the director of programs for writers. She directs the Oregon Book Awards & Fellowships, oversees the writing classes and Delve seminars, and works with program assistant Jessica Meza-Torres to curate free literary events with community partners in our downtown event space. Prior to working at Literary Arts, she was awarded an Oregon Literary Fellowship in poetry in 2002. Her first full-length collection, That Place Where You Opened Your Hands, the winner of the Juniper Prize in poetry, will be published in 2020. She has lived in Portland since 1988 and highly recommends Stray City by Chelsey Johnson, a novel about Portland in the 90’s. She loves animals.

Recruiting and scheduling the amazing 300+ volunteers who support the Portland Book Festival each and every year, Denver Olmstead has worked seasonally to support Literary Arts mission to engage readers since 2016. Three books that have changed her life include Ender’s Game by Orson Scott Card, Weetzie Bat by Francesca Lia Block, and Harry Potter by J.K. Rowling.

Committed to connecting individuals through service and outreach, she strives to support organizations that foster community connections through the appreciation of art and literature. Before her arrival in Portland, she worked with the Utah Humanities Council and the Utah Arts Festival.

Outside the Literary Arts office she is a storyteller, a server, and a volunteer. She can be found at coffee shops reading folktales or writing her own. 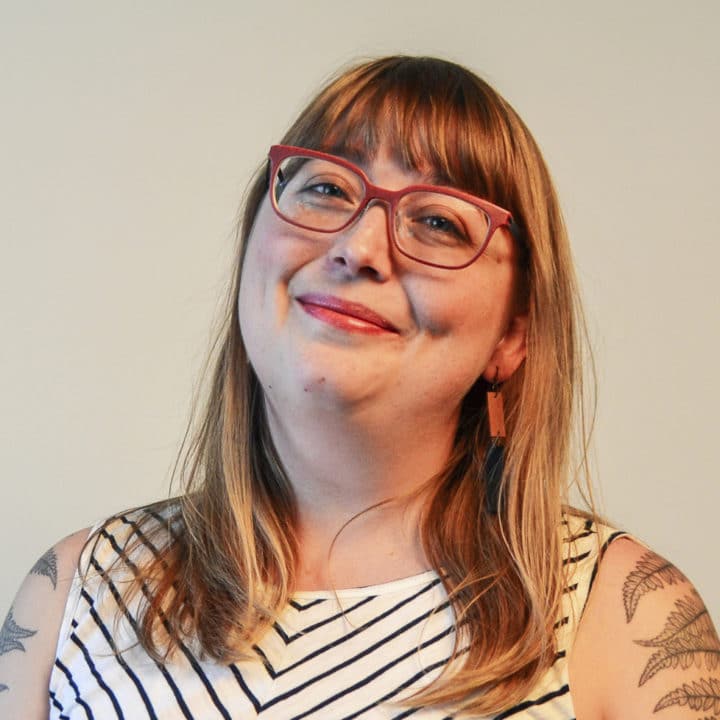 Liz is the public programs coordinator at Literary Arts, where she provides support to the Portland Book Festival, Portland Arts & Lectures, The Archive Project, and anything else that involves a stage and an audience. A live performance and event producer, Liz is passionate about strengthening communities through shared artistic experiences. She has previously worked as associate producer for local live storytelling show, Back Fence PDX; house manager at Portland Center Stage; and on the events team at Powell’s Books. She holds a degree in theatre stage management from the University of Wisconsin – Madison. 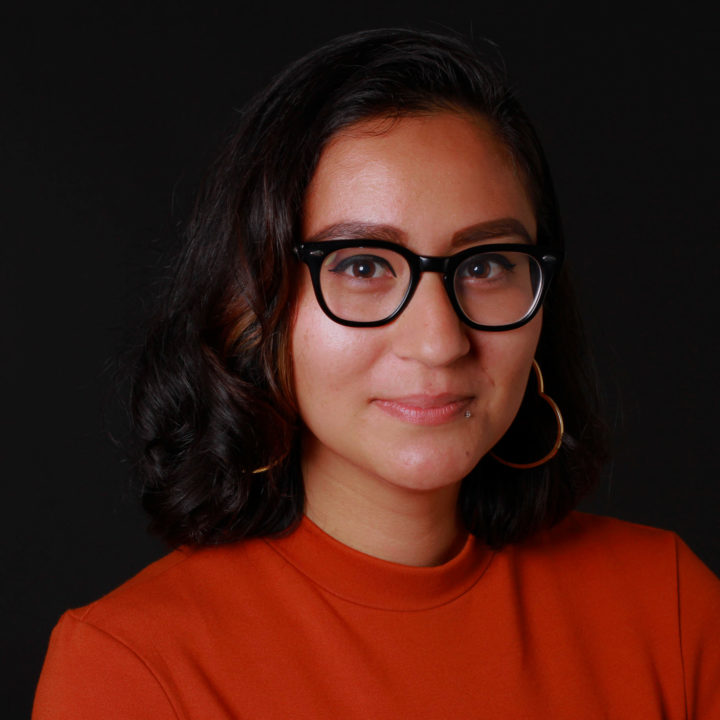 Emilly Prado is a program specialist for Literary Arts’ Writers in the Schools program where she coordinates creative writing residencies, bringing published writers into high schools in Portland and East Multnomah County. She also runs the WITS Apprentice Program which provides paid, stipend-based professional development opportunities to writers of color seeking to develop their expertise in the classroom. Outside of Literary Arts, Emilly works as a freelance journalist, writer, and educator. Her award-winning work as a freelance journalist has appeared in over two dozen publications including NPR, Marie Claire, The Oregonian, Eater, The Stranger, and more. See her work at www.emillyprado.com. 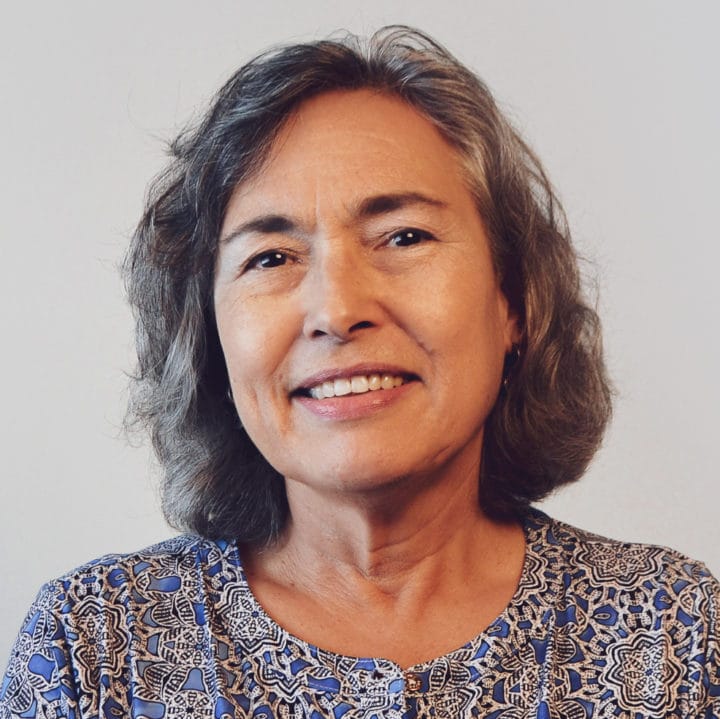 Valeria is the Director of Finance and HR for Literary Arts. She is responsible for back office operations such as accounting, human resources, and technology management. Valeria’s career has focused on non-profit, entertainment, creative services, and environment management. 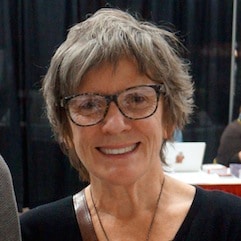 Joanna is the author of the award-winning novel Little Miss Strange (Algonquin Books). Other work has appeared in ZYZZYVA, Windfall Journal, Cloudbank, Artisan Journal, Northern Lights, Oregon Humanities, High Desert Journal, VoiceCatcher, and Bellingham Review, among others. Her essay “That Thing With Feathers” was cited as Notable in 2015 Best American Essays. She is an Attic Atheneum Fellow in Poetry,  and cohosts the prose critique group Pinewood Table.  She works with youth at Literary Arts’ Writers in the Schools and Young Musicians & Artists. Her new novel, A Small Crowd of Strangers, is due out in Fall 2020. 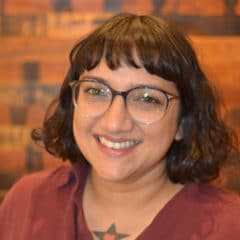 Jyoti is a writer, editor, and communications professional with more than fifteen years experience in the publishing world. Originally from Australia, Jyoti co-founded the small press ‘Beating Hearts Press’ which released and distributed books, zines, and music in Australia, New Zealand and Indonesia. Since moving to Portland in 2008, Jyoti earned her Master’s in Book Publishing from Portland State University, and was the prose editor for The Portland Review. Her writing focuses on pop culture, feminism, and multi-racial identity. Her work has appeared in Bitch, Calyx and Feminist Review.