Tuesday, June 11th, Literary Arts welcomed Brian Komei Dempster and Janice P. Nimura, two writers investigating different aspects of the Japanese-American journey: one from the east coast and one from the west, one in poetry and the other in prose, one story from the WWII era and the other Victorian, one story of the disempowered and the other of the aristocracy.

For Brian Komei Dempster, a poem begins with an idea, a memory or a string of words, which he then allows to develop unheeded, through a dedicated detachment from the rational mind. His debut poetry collection, Topaz, began in college when one particular lecture brought to his awareness the oft-silenced history of internment camps during WWII. Outraged and incredulous, he then unearthed his maternal family’s quieted story of being Japanese-American prisoners of war. Topaz, the internment camp in the Utah desert, became a destination for the poet and a source of rich imagery and discovery, a touchstone upon which he could turn over the concepts of family, ritual, suffering and love. His collection of poems, he explained, is the story of one family: father, mother, and son, as they travel to Topaz and try to make sense of their families’ losses and the life they know now. Brian read several poems from the book, including “Chandelier” in which the father figure narrator considers the prismatic mystery of light alongside the synapses in his son’s brain as it wrestles with epilepsy; he captures that sense of suspension one feels living moment to moment braced against the scars we inevitably gain and carry.

Janice P. Nimura’s book, Daughters of the Samurai, began with a conscientious decision to study the thing you love to write about, rather than pursue a degree in writing. Nimura was newly married to a Japanese man and fascinated by Japanese culture. The spark for this book was found in a worn green cloth-covered volume in an archaic row of kitschy books about the Orient. What she found told the story of a Victorian Connecticut woman and her dear friend from Japan. In the 1800s, visitors from Japan, particularly women, were extremely uncommon, but this woman considered one kin. Nimura began a platitudinous retracing of their steps through New England towns and colleges and next-of-kin accounts. She is as passionate a researcher as she is a storyteller. What she discovered was a little-known history of a Japanese government effort in which young aristocratic women ranging in age from 6-14 years old were sent to study the ways of American men and women for a period of ten years, with the intention of bringing back knowledge to “leaven” the Japanese culture with Edwardian customs. Three young women are the subject of her book which follows their American integration, disbanded return home and re-acclimation to Japan. Nimura recounts their stories via letters to and from their families and friends, through their adaptations, unique college experiences and their adult challenges and achievements once back in Japan.

A lively crowd packed the Literary Arts space, including Brain Komei Dempster’s parents and long-standing family friends. Both authors brought engaging and colorful power point presentations, spoke of their writing processes, and answered questions from the audience. Thanks to Four Way Books and Norton for partnering with us on this event! 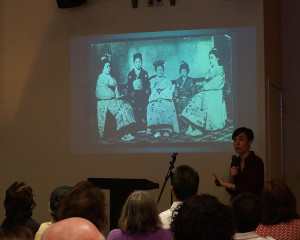 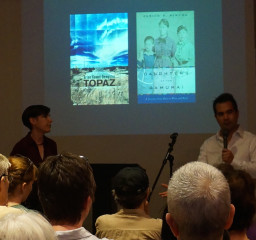 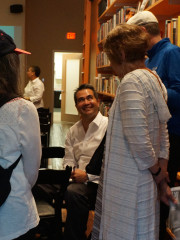 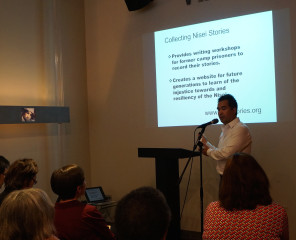 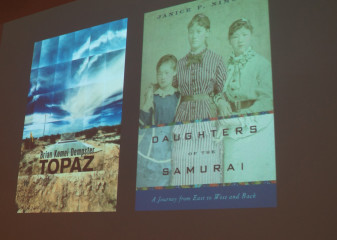