We’re excited to introduce each of our 2017 Oregon Literary Fellowship recipients on our blog this winter! For these fellowships, out-of-state judges spent several months evaluating the 439 applications we received. These judges named nine writers and two publishers to receive grants of $3,500 each. The 2018 OLF applications will be posted online soon, and the deadline will be toward the end of June. You can read more about the application process by clicking here.

Stephanie Adams-Santos is a Guatemalan-American writer, educator, and tarot reader. She is the author of Swarm Queen’s Crown (Fathom Books), and several chapbooks, including Little Fugues (Sola Books, 2015) and The Sundering (Poetry Society of America, 2009), which was selected by Linda Gregg as winner of the New York Chapbook Fellowship. Adams-Santos’ poems have appeared in many print and online journals and magazines, including Guernica Magazine, The Boston Review, and Orion.

It’s raining outside, and everywhere there’s that cold Northwest gray with the kind of gentle but withering force that drives a person into bed, middle of the day. So here I am, curled up with my questions. Sometimes you just have to put the water on the stove, so to speak: heat it up ready or not. Instead of asking myself what inspires me, I’m am asking why is it so hard to answer questions? But I suppose the answer to that is wrapped up in the trouble, or in having what feels like a less-than-human mind that flutters and sinks and disperses, migrates, hibernates, or mostly bends willfully against whatever I would have it do. And if I’m honest about what comes through me, I’m still dwelling on the little disagreement I had last night with a friend, let me explain: we were looking at the image of an artist’s work—an occluded, sorrowful profile of a woman. A self-portrait of the artist, perhaps. “I’m all about positive energy,” my friend said. “But this—it reads to me as dark energy. It tells me to go away. It just doesn’t inspire.” I tend to think it’s the difficult things that draw us in, or out, that bind us to our art. Recently at the MOMA I was wandering through the Roman statuary and was admiring the stunning forms when suddenly from across the room I saw something I hadn’t seen the likes of before: and old woman’s face captured in marble and gnarled by time—her mouth half-open, eyes empty and looking toward the sky. Her lost, chipped-off nose made a skeletal look. In the next room I encountered towering ancestor poles carved from a single, inverted mangrove tree by the Asmat people—ritual funerary sculptures that are staked into the ground and stand twelve feet. No, “sculpture” is too Western a term—these were not that. These were real sites of spiritual incarnation, powerful, and even dangerous. After funeral feasts, these poles would typically be destroyed with an axe to ensure that the departed did not return to haunt. On these things I took note. I stirred. Perhaps what I’m getting around to saying is that inspiration for me doesn’t come with the connotation of elation but is more about something moving in my spirit, something remembering. Then if I want to write with it I have to let the little worm squirm and I struggle with it. It writhes it’s way into being something else.

Mostly I rove and collect and stumble into things, I think. The “drafts” seem to always already be fragments/ruins by the time they’re born, I work or overwork until they’re ripe for abandonment. Then things get between us and time washes over us until we are nearly strangers but shipwrecked we find each other again and the relationship becomes more truthful, and that’s when everything finally deepens. From the outside it looks like: notes/draft/edit. But just like the bis poles are not sculptures, so the process is not truly reducible from the life its attached to.

First upon hearing the news I was dumbstruck! Then that swiftly became a feeling of really deep gratitude and humility, a stab of good fortune in a time of much evil. Receiving this fellowship felt like receiving a hefty sum of emotional support as much as it was financial. To feel seen and bolstered and supported in that way is really humbling and healing. It gives me strength and energy to be more available to others, to be more present for the fight ahead, in my writing and otherwise.

Too many things, as usual. Aside from collecting my grandmother’s stories which are full of real magic, I am working on a deck of Major Arcana oracle cards inspired by Clarice Lispector, a book of poems exploring the more ruined and ruinous aspects of our human structures, and a collection of short stories about non-human encounters at the end of civilization.

Stephanie Adams-Santos writes, “Bone is to stone an old memory.” In these lines, she invokes history as a knowledge that can be felt, something with the potential to transform (and transform our perspectives) at the intersections of language and image, intimacy and violence, and grief and galvanization. In her willingness to declare the emotional self accountable, Adams-Santos enables us to explore emotion beyond a single expected direction. These poems make a case for the interdependence of the personal and the environmental, not just as an experiment of genre but as part of a vital, poetic tradition of creative resilience.

Stones
stones fly through the air

a stone can embarrass
a stone can remind the flesh
of its softness, of its not belonging,
of the pulse that keeps its color

stones are the weapon of the poor
stone is the body, after it bears
all that it can

it cannot be made in beauty
unless beauty moves across this place
in a black canoe, outstretching flesh
on a bony hand, a cutting of antler
still green and porous where the
scalp was, a stone

but bones stir in the ground
in the fetid waters, making them more
green in the memory,
more round, they rise up
they clink, they roll,
they tumble out from darkness
brimming with earth 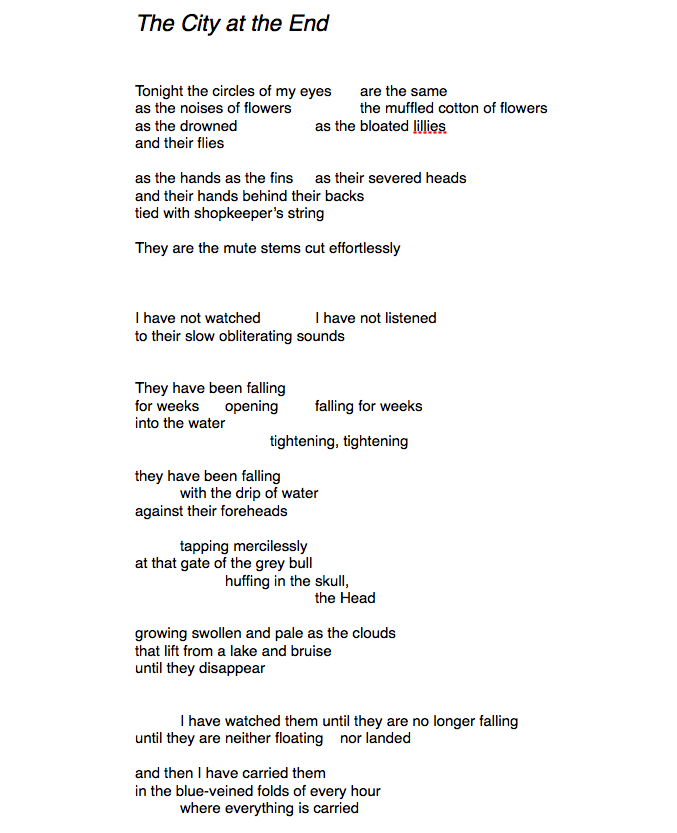 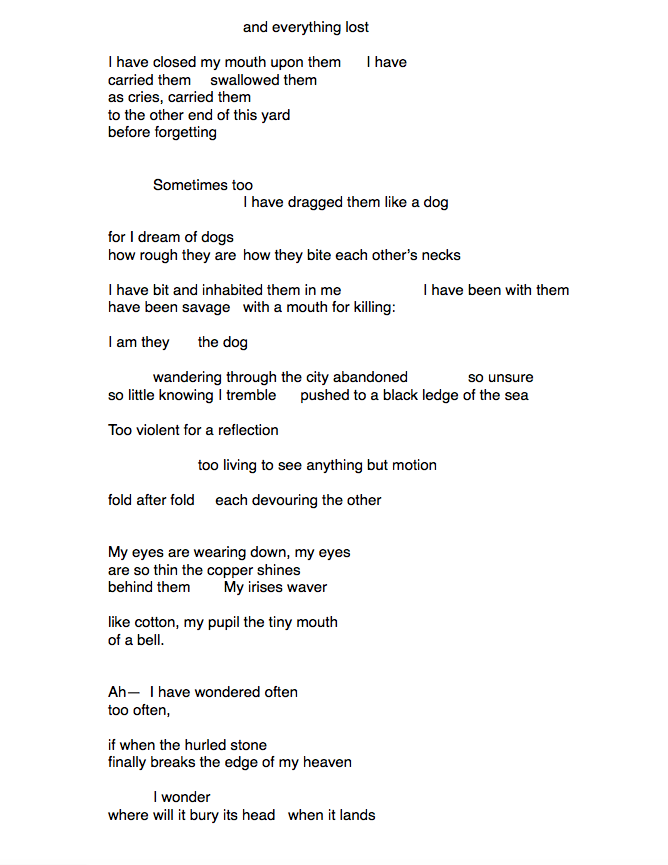 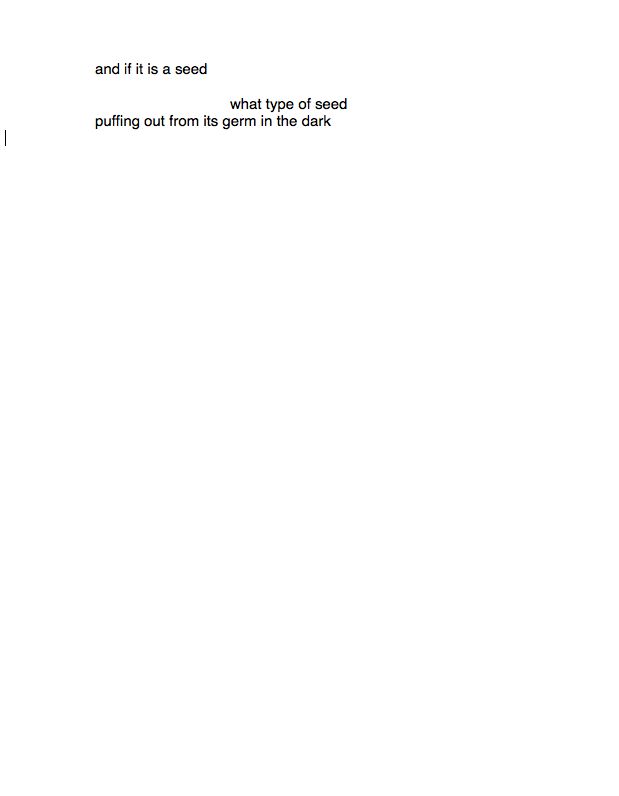