We are hosting award-winning author Jennifer Egan on February 21 the fourth event of our SOLD OUT 2018/2019 season of Portland Arts & Lectures. During her time in Oregon, Egan will visit with students at Lincoln High School and local writers at our community space. 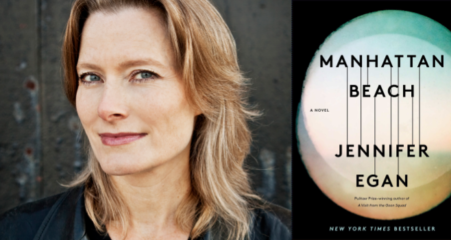 Jennifer Egan was born in Chicago, Illinois. At seven years old, she moved to San Francisco, California. She did not always want to be a writer; as a teenager, she was determined to study archaeology. That ambition was abandoned after a summer sweating through an artifact dig in Illinois. She took a gap year before college to backpack through Europe. While abroad, she remembers: “I felt very cut off and I think in that cut off state, I discovered that writing was an essential part of my connection to the world. It was an epiphany, although I don’t remember a specific moment when it happened… I felt very isolated. I wonder sometimes whether anyone experiences that isolation anymore. I wonder whether without that isolation I would have discovered I wanted to be a writer.”

Back home, she majored in English literature at the University of Pennsylvania. After Penn, she received a fellowship in English and attended Cambridge University. She says, “I really feel like my bone structure—as a writer—was acquired in England. I don’t know what I would’ve done without those two years of reading. I just read a lot, especially nineteenth century literature. And a lot of poetry and Greek tragedy. And a lot of Shakespeare.”

After grad school, she moved to New York City, working in the typing pool of a law firm while moonlighting as a slush pile reader for The Paris Review. She continued to work on her writing and published her first book in 1993: Emerald City, a book of short stories. A novel, The Invisible Circus, followed in 1995, and was later made into a film.

In 2001, she published her third book, the novel Look at Me. Told through the story of a model and the aftermath of an accident that renders her face unrecognizable, it is an examination of how “mass media and image culture had qualitatively changed the experience of being human.” A finalist for the National Book Award in Fiction, Egan says it is her favorite of her books, because it is the most ambitious. A gothic horror novel and national best seller, The Keep, followed in 2006.

In 2010, Egan published A Visit from the Goon Squad, which straddles the line between a linked story collection and novel. Critically acclaimed and a national best seller, the novel won the Pulitzer Prize, a National Book Critics Circle Award, and the Los Angels Times Book Prize. As Vogue wrote, “Egan’s bravura fifth book samples from different eras (the glory days of punk; a slick, socially networked future) and styles (sly satire, moving tragedy, even PowerPoint) to explore the interplay between music and the rough rhythms of life.” A story originally told in tweets, “Black Box,” was published in The New Yorker in 2012. Last year, Egan published perhaps her most unexpected follow-up to these experimental narratives: historical fiction.

Manhattan Beach (2017) is set in a World War II–era New York City populated by gangsters, sailors, bankers, union men, and the only female diver at the Brooklyn Navy Yard. For Egan, writing starts very much with place and time; characters, theme, and structure all follow. For Manhattan Beach, “It was incredibly fun to just go there with this stuff, in the manner of Robinson Crusoe or Mutiny on the Bounty, these stories that I loved as a kid. It was just incredibly fun to write a shipwreck, and a survival-at-sea story about mobsters trying to kill each other. That felt different.” The book was awarded the 2018 Andrew Carnegie Medal for Excellence in Fiction and was longlisted for the National Book Award.

The New Yorker, Harper’s, Granta, McSweeney’s, and more have all featured Egan’s short fiction. She is the recipient of a Guggenheim Fellowship, a National Endowment for the Arts Fellowship in Fiction, and the Dorothy and Lewis B. Cullman Fellowship at the New York Public Library. In 2015, the University of London at Birkbeck held an academic conference about her work. In 2018, she became president of PEN America. She is also an award-winning journalist and publishes often in the New York Times Magazine. She says, “Fiction is my deepest love, but I love journalism, too. It keeps me thinking vigorously, and it reminds me that there is a world out there. It has taught me how to distill enormous quantities of information.”

Egan lives in Brooklyn, New York, with her husband and their two teenage sons.

For more information on this speaker, please visit prhspeakers.com.