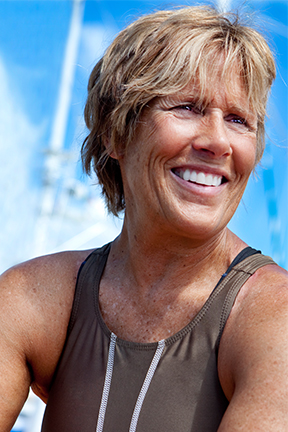 At the age of sixty-four, long-distance swimmer Diana Nyad became the first person to swim the 111 miles from Cuba to Key West without a shark cage, a Herculean feat that had eluded her when she made the attempt three decades earlier, in peak form. Nyad discusses her new memoir, Find a Way, a passionate story of this heroic adventure and the extraordinary life experiences that have served to carve her unwavering spirit, with Cheryl Strayed (Brave Enough).

Always that swim has been for me about living large, about turning 60 and feeling the grip of existential angst—Who am I? And I the person I can admire?—much more than an endurance event. And the people who were on the beach that day—the crying, weeping thousands of people, and the millions of people who have gotten a hold of me—they’re not [all] swimming fans . . . They’re people who want to live that message: You never, ever give up and you will get to your other shore. – Diana Nyad

Two hours before the end of this thing, now the palm trees are in full sight. And I asked my team—it’s 44 people, this is a true expedition: you’ve got Dr. Angel Yanagihara, the world’s leading box jellyfish expert from University of Hawaii; you’ve got your shark team, which I mentioned earlier; you’ve got a navigation team (this is an extremely difficult mathematical navigation); you’ve got the medical team; I’ve got my own personal team, which is nutrition and rousing that drop of courage when you don’t think you have anything left—it’s a big expedition. And two hours from the end, more of less, when we’re pretty sure we’re making it to the end, I ask my team to come over and make a semi-circle of boats, and we stop. And I cried like a baby. And I said, ‘You know, I guess I’m going to stumble up on that beach pretty soon, and I guess somebody is going to take my picture, but don’t you ever forget—because I will never forget—that we did this together. We made history together. – Diana Nyad

On September 2, 2013, at the age of sixty-four, Diana Nyad swam the 111 miles from Havana to Key West in fifty-three hours, becoming the first person to swim from Cuba to Florida without the aid of a shark cage. For those already familiar with Nyad—whether as an author, journalist, motivational speaker, or long-distance swimmer—this was the fruition of a long-anticipated dream. Nyad first gained national attention in 1975, when she completed a record-breaking swim around Manhattan, and then again in 1979, when she swam from The Bahamas to Florida and set a world record for distance swimming over open water. It was at this time that she also made her first attempt at the Cuba-to-Florida swim, but was thwarted by unfavorable winds after 76 miles. In the thirty-year interim between the height of her swimming career and her 2013 feat, Nyad was a sports broadcaster and journalist for such media as NPR and ABC’S “Wide World of Sports,” among others. She is the author of four books, including her most recent memoir, Find a Way: One Wild and Precious Life, which details her multiple attempts and eventual success at the Cuba-to-Florida swim. Of the book, People Magazine wrote, “It reads like a gripping thriller. Nyad is living proof that, as she says, ‘You can live out your dreams if you refuse to ever, ever give up.’”

Cheryl Strayed catapulted into fame in 2012 with her #1 New York Times bestselling memoir Wild: From Lost to Found on the Pacific Crest Trail, which went on to be adapted into an Oscar-nominated movie starring Reese Witherspoon and Laura Dern. Nick Hornby wrote the screenplay, and Jean-Marc Vallée directed the film. Strayed followed up this book with two more New York Times bestsellers: Tiny Beautiful Things, a collection of essays compiled from Strayed’s “Dear Sugar” advice column in The Rumpus; and Brave Enough, a collection of quotes drawn from her previous writings. Strayed co-hosts the WBUR podcast Dear Sugar Radio, and her essays have been published in The Best American Essays, The New York Times, The Washington Post, Vogue, Salon, and Tin House, among others. She is a long-time activist for women’s rights, including abortion rights and women in the arts. Of her writing, George Sanders has said, “Big-hearted, keen-eyed, lyrical, precise…Cheryl Strayed reminds us in every line that if defeat and despair are part of human experience, so are kindness, patience, and transcendence.”