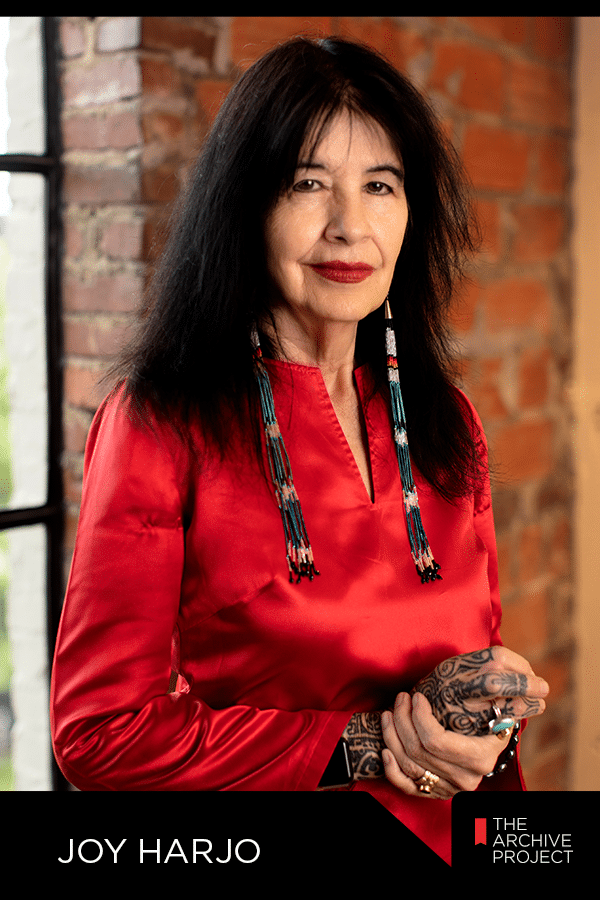 Joy Harjo discusses her recent projects as US Poet Laureate, plus crafting poetry and the importance of art, in this talk and conversation with Anis Mojgani.

In this episode of The Archive Project, we feature poet Joy Harjo. Harjo became the first Native American Poet Laureate of the United States when she was appointed in 2019, and is currently serving her third term in that post.

She joined us as part of Portland Arts & Lectures from her home in Tulsa, Oklahoma. During her Laureateship, she edited two landmark anthologies: When the Light of the World Was Subdued, Our Songs Came Through: A Norton Anthology of Native Nations Poetry, and Living Nations, Living Words: An Anthology of First Peoples Poetry.  Harjo uses these two projects as a basis to structure her talk, which takes us deep into the history of Native American poetry, from periods when it was an oral tradition, to the first appearance of written poetry in the seventeenth century, all the way to the current day. These anthologies gather together work from hundreds of languages, nations and tribes to present to the reader the breadth and depth of a tradition that continues to flourish, but that was left out, erased, or otherwise made invisible by editors, publishers, and academics over the centuries.  Harjo’s work re-surfacing these poems and poets is vital to our understanding of ourselves as a nation because, as Harjo says, a nation is defined by its literature.

In the second half of this episode, Harjo will be in conversation with Oregon’s Poet Laurate and Literary Arts Board Member, Anis Mojgani.  Mojgani is an international poetry slam champion, and the author of five books of poetry, most recently In the Pockets of Small Gods. His first children’s book is forthcoming from Chronicle Books, and his poem “Closer” was included in the recently published anthology, African American Poetry, edited by Kevin Young.

“Those of us who read and listen to poetry want our ears and perception bent for unique insight, and want to see how the impossible becomes momentarily possible in the arrangement of language and meaning.”

Joy Harjo is a member of the Muscogee (Creek) Nation. She is the author of nine poetry collections, most recently An American Sunrise, and one previous memoir, Crazy Brave. She edited the anthologies When the Light of the World Was Subdued, Our Songs Came Through and Living Nations, Living Words. Named poet laureate of the United States in 2019, she lives in Tulsa, Oklahoma, where she is a Tulsa Artist Fellow.

“I’m holding the door open and saying ‘Look at all these poets.’ We have so many poets, and this is the time that we go to the poets. This is the time we need the poets and poetry, because the poets are the truth tellers.”