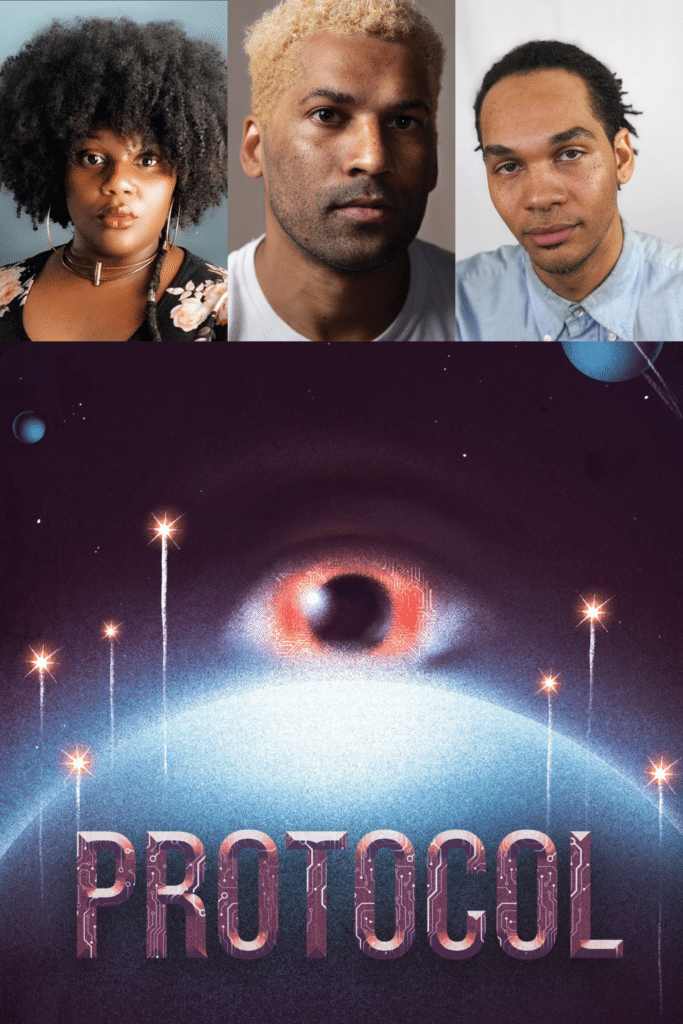 A collaboration with Portland Center Stage to celebrate the Afro-futurist sci-fi audio thriller PROTOCOL, and explore the present & future of theatre.

We collaborated with Portland Center Stage to bring you this episode celebrating the Afro-futurist sci-fi audio thriller, PROTOCOL. Portland Center Stage produced PROTOCOL for its PCS Remix season. We’ll hear a segment of the pilot episode of PROTOCOL and then dive into a conversation between Chip Miller, the associate artistic director of Portland Center Stage, with lead artist on the project Phil Johnson, and dramaturg and literary manager Kamilah Bush. They discuss the process of writing collaboratively during a pandemic, creating science fiction worlds, breaking down barriers in the arts, and the state of theatre right now.

About PROTOCOL: When an unexpected tragedy befalls the crew aboard space cruiser Elegua IV, they are thrust into a thrilling mystery which threatens their mission to preserve humanity. Conceived by Portland artist Phil Johnson, this science fiction audio experience traverses multiple times, dimensions, and galaxies to explore how the systems we trust may not always be on our side. PROTOCOL was written by Bobby Bermea, Tyharra Cozier, Phil Johnson, and Ashley Song Mellinger. Visit the Portland Center Stage website to listen to full episodes of PROTOCOL and access additional content.

“One thing that I would love, as an Afro-futurist, to do is to break down these barriers of what is theatre and theatricality. My intention with this piece is to show that you can create an art piece that is cinematic in one way or theatrical in another way, but is neither of those things. It’s showing you that those terms are more malleable than you think.” – Phil Johnson

Kamilah Bush is a dramaturg, playwright, and educator originally from North Carolina. She holds a B.F.A. in Theater Education from UNC-Greensboro. Most recently, she served as the artistic assistant at Two River Theater in Red Bank, NJ, and formerly spent several seasons at Asolo Repertory Theater in Sarasota, FL, and Triad Stage in Greensboro, NC.

Phil Johnson is a visual and theatrical artist based in Portland and the host of the Radical Listening Podcast. Phil is a self-proclaimed futurist and surrealist who focuses on the realities of the human condition, especially as it relates to his experience as an African American male. Phil is also highly concerned with the effect that technology plays on our mental and emotional health, and he expresses that through his work, whether it is storytelling, painting, or sound design. Phil Has a B.F.A. and M.A. from Ohio University.

“What’s so exciting about being a theatre artist at this time is that we are adaptable. …The only way we survive is to embrace different mediums, to embrace the future.” – Kamilah Bush