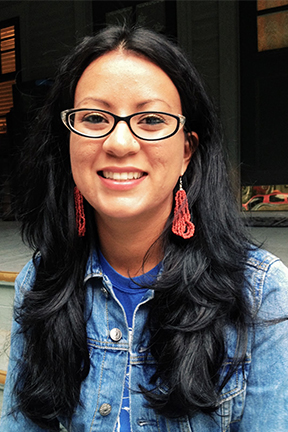 Melanie Fey is a Diné (Navajo) writer, zinester and Indigenous feminist currently living in Portland, OR. She was spawned in the rez town Tuba City (Dinétah), AZ, received her bachelor’s degree in the lucrative field of Creative Writing from Arizona State University and is currently working as a public library minion. She co-created/edits the Native American feminist zines Empower Yoself Before You Wreck Yoself and The Nizhóní Beat and has contributed to numerous other zines such Survivance: Indigenous Poesis, Stories from Oyate: Modern Native American Voices and From Hell to Highwater. Melanie was also a recent participant in the 2015 One Flaming Arrow: Inter-tribal Art, Music and Film Festival. Her work seeks to celebrate the LGBTQ/two spirit community, raise awareness about violence against Native women, and explore the sometimes conflicting dichotomy of rural and urban Native life. Look for two more of her forthcoming pieces in the anthology As/Us: A Space for Women of the World and Fix My Head.

Melanie Fey will give a Pop-Up Reading at 2pm in the Native American Art Gallery (Main Building, 2nd Floor).