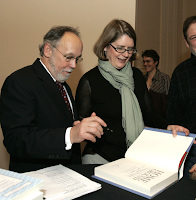 Literary Arts congratulates the 2008 Special Awards recipients. This year’s honored individuals and organization will receive their awards at the 2008 Oregon Book Awards ceremony. Three special awards will be given this year.

The Charles Erskine Scott Wood Distinguished Writer Award is presented to an Oregon author in recognition of an enduring, substantial literary career. The award is not given every year; previous recipients include Ursula Le Guin and Ken Kesey.

The award is named for C.E.S. Wood (1852-1944), who was an Oregon author, attorney and soldier. He was a leader in Oregon’s literary community, and published several articles in Pacific Monthly, the magazine that later became known as Sunset. His best known work is Heavenly Discourse. There’s an excellent article on C.E.S. Wood by George Venn, published in the Oregon Historical Society Quarterly.

Barry Lopez received the National Book Award and Oregon Book Award for Arctic Dreams. His book Of Wolves and Men, was a National Book Award finalist. His book of short fiction, Resistance, won the H.L. Davis Award for Short Fiction in 2005. In its review of Resistance, The New York Times said, “With somber grace, Lopez parses the facile bumper-sticker slogan the personal is political, and discovers in it the potential for a host of private radicalizing experiences.”

He is also the editor, with Debra Gwartney, of Home Ground: Language for an American Landscape. Barry is also a contributing writer for National Geographic, and a frequent contributor to Outside, Harper’s, Orion and other publications.

Literary Arts congratulates Barry Lopez as the 2008 recipient of the C.E.S. Wood Award! Barry hosted the 2006 Oregon Book Awards and is pictured here, with Debra Gwartney at the ceremony.