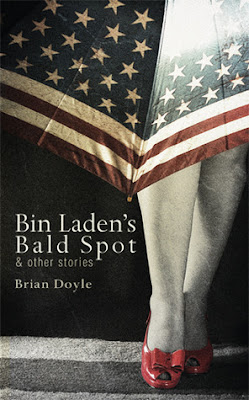 Bin Laden’s Bald Spot: & Other Stories is a wild collection of wild voices unreeling wild tales: His Murderous Idiocy’s barber talking about life in the Tora Bora caves, Joe Kennedy trying to explain his selfish and haunted life to a bartender, Cardinal Bernard Law’s kidnappers explaining how right and necessary it was to “nick a Prince of the Church and put the slime to work to expiate his crimes,” and much, tumultuously, else.

An excerpt from Bin Laden’s Bald Spot & Other Stories

I am here to tell you that Osama has a bald spot the size of a baby’s fist on the back of his head, shaped exactly like Iceland, complete with the Vestfjarda Peninsula to the west. He does not like to speak of this and indeed we have only spoken of it once, when I said to him, sir, you have a bald spot back here shaped just like Iceland, and he said I do not, and I said, yes sir, you do, it is the size of my fist and even has the little peninsula to the west, just, like Iceland, and he said I do not have a bald spot, and I said, well sir, actually yes you do, sir, it’s a big honking thing, too, you could land a helicopter on it, so maybe we should be discussing a hair weave? Sir? Sir?

Brian Doyle is the editor of Portland Magazine at the University of Portland, “the finest spiritual magazine in America,” says Annie Dillard. He is also the author of thirteen books, among them the “sprawling serpentine sinuous riverine” Oregon novel Mink River, a finalist for the 2011 Oregon Book Award.


Praise for Bin Laden’s Bald Spot & Other Stories
“Virginia Woolf addressed what she called the Common Reader—Brian Doyle doesn’t have any of those. His readers turn instantly and preternaturally uncommon, seeing and feeling and noticing and knowing what they have never before taken in: a kind of laughing piercing antic holiness. To read Brian Doyle is to apprehend, all at once, the force that drives Mark Twain, and Walt Whitman, and James Joyce, and Emily Dickinson, and Francis of Assisi, and Jonah under his gourd. Brian Doyle is an extraordinary writer whose tales will endure. The sublime ‘Waking the Bishop’ is going to inhabit American anthologies forever and ever.”
—Cynthia Ozick

“Brian Doyle has a fine quick mind alert for anomaly and quirk-none of them beyond his agile pen.” —Peter Matthiessen

“No one writes prose with the verve and honesty, the gusto and wit of Brian Doyle.”—Pattiann Rogers

“Some people can write. Some people can feel. Brian Doyle, born with a silver tongue and a big heart, is among the lucky few who can do both.” —Anne Fadiman

“What I like about Brian Doyle’s writing is that it’s real—it’s got mud and blood and tears but it’s also got earthly angels who teach him to grasp on to each small epiphany as it opens before him.” —Martin Flanagan

“Brian Doyle’s writing is driven by his passion for the human, touchable, daily life, and equally for the untouchable mystery of all else… his gratitude, his sweet lyrical reaching, is a gift to us all.” —Mary Oliver
Suggested Links
Video of Brian Doyle’s Stanley P. Stone Lecture at Boston University
Portland Magazine Website