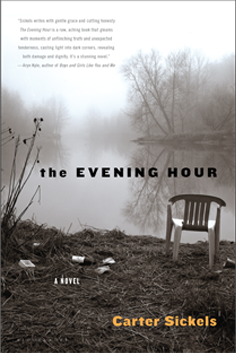 The Evening Hour  takes place in Dove Creek, West Virginia, a poor, distressed community living under the threat of mountaintop removal coal mining, and home to twenty-seven-year-old Cole Freeman, a nurse’s aid and drug dealer struggling to imagine a meaningful future for himself.

Carter Sickels, a graduate of the MFA program at Pennsylvania State University, was awarded fellowships to Bread Loaf Writers’ Conference, the Sewanee Writers’ Conference, the MacDowell Colony, VCCA, and the Djerassi Residency.  After spending nearly a decade in New York, Carter left the city to earn a master’s degree in folklore at the University of North Carolina at Chapel Hill.  He lives in Portland, Oregon.

An excerpt from The Evening Hour

Cole backed out of the driveway, the thermos of coffee resting between his legs. There was only one road that ran through Rockcamp, and his grandparents’ property, tucked in a hillside, was at the end of it, where the rutted asphalt turned to dirt and cleared land gave way to forest. The twenty acres, now whittled down to fourteen, had originally belonged to Cole’s great-great-grandfather. For over two hundred years the Freemans had been on this land. Cole’s grandparents still lived in the same house where they’d been all of their married lives; his aunts and uncles and cousins used to live on the small plots around them, but they had moved away, spread out across West Virginia and beyond.
Cole lived on a slivered portion of land that would have gone to his mother, if she was around. He drove past his single-wide, which sat close to the road, the hills looming behind it; sometimes when they blasted, the trailer was engulfed in a cloud of dust. The Heritage mining operation up above them had grown to 1,800 acres. It wasn’t like the old days of sending men underground. Now, to get to the layers of coal seams, they blew the tops off the mountains, bringing them down hundreds of feet, and then pushed the rubble into the valleys. It was impossible to grasp the enormity of 1,800 acres. That was almost 1,800 football fields. He’d never seen the site; it was guarded and blocked off, and from here, it looked as if the mountain was still standing. Behind the ridge, it was a different story.

Praise for The Evening Hour

“A plainspoken novel, but one with intensely lyrical moments, about the devastation of the West Virginia landscape — and the devastation to the local communities — owing to mountaintop removal….Sickels has great insight into the emotional life of West Virginians, and he refreshingly presents them as fully realized characters.” –Kirkus Reviews
“Sickels’s debut revolves around a cast of characters whose world is pulled out from under them….The novel is grounded in rich storytelling.” –Publishers Weekly
“Cole’s point of view is one not often encountered in contemporary fiction. First-time novelist Sickels paints [his] experience with an unflinching hand.” –Library Journal
“In this stark, beautiful debut, Sickels writes with gentle grace and cutting honesty about characters as wounded as the condemned land on which they live.The Evening Hour is a raw, aching book that gleams with moments of unflinching truth and unexpected tenderness, casting light into dark corners, revealing both damage and dignity. It’s a stunning novel.” –Aryn Kyle, author of The God of Animals and Boys and Girls Like You and Me
“The troubled heart of the country, and the hearts of the deeply compelling people who populate it, beat strongly and unforgettably in The Evening Hour. Carter Sickels is a tremendous novelist with a tremendous story to tell in these pages, and he tells it with beauty and power.” Stacey D’Erasmo, author of The Sky Below
“The Evening Hour could be a hymn sung out in a country church; when I finished it, I wanted to close my eyes, listen to its echoes, feel the power of its song. For that is what this beautiful book is: a sweet-souled, hard-eyed prayer for a beleaguered people and the beloved landscape they call home. With striking authenticity and admirable restraint, Carter Sickels brings both forcefully to life in his deeply moving, spiritually uplifting debut.” –Josh Weil, author of The New Valley
“The Evening Hour is engrossing. It elicits strong, complicated emotions from the first page. I felt inhabited by the characters, and as the page numbers increased, I was as scared for it to end as I was to see what would happen.” –Nick Reding, author of Methland
“A refreshing cry from the populace, Carter Sickels’s The Evening Hour captures the spirit of America’s New Feudalism. The setting is West Virginia and Heritage Coal has a monopoly: on the land, on the lives of the people who work for them, and on the families who live downhill from the toxic sludge pond. Life is hell and survival is all there is. Some have the Bible, some have booze and pills and sex, and some still dare to have a dream.” –Tom Spanbauer, author of The Man Who Fell in Love with the Moon