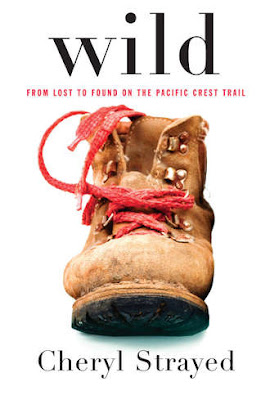 Wild is the story of an eleven-hundred-mile solo hike that broke down a young woman reeling from catastrophe—and built her back up again.

An excerpt from Wild

As I stood there, I knew I was done for the day, though when I’d stopped I’d intended to push on.  Too tired to light my stove and too exhausted to be hungry in any case, I pitched my tent, though it was only four in the afternoon.  I took things from my pack and tossed them into the tent to keep it from blowing away, then pushed the pack in too and crawled in behind it.  I was immediately relieved to be inside, even though inside meant only a cramped green nylon cave.  I set up my little camp chair and sat in the small portal where the tent’s ceiling was high enough to accommodate my head.  Then I rummaged through my things to find a book: not The Pacific Crest Trail, Volume I: California, which I should have been reading to see what lay ahead the next day, and not Staying Found, which I should have read before starting the trail, but Adrienne Rich’s book of poems, The Dream of a Common Language.

This, I knew, was an unjustifiable weight.  I could imagine the disapproving expressions on the faces of the authors of The Pacific Crest Trail, Volume I: California.  Even the Faulkner novel had more right to be in my pack, if only because I hadn’t read it and therefore it could be explained as entertainment.  I’d read The Dream of a Common Language so often that I’d practically memorized it.  In the previous few years, certain lines had become like incantations to me, words I’d chanted to myself through my sorrow and confusion.  That book was a consolation, an old friend, and when I held it in my hands on my first night on t he trail, I didn’t regret carrying it one iota–even though carrying it meant that I could do no more than hunch beneath its weight.  It was a true that The Pacific Crest Trail, Volume I: California was now my bible, but The Dream of a Common Language was my religion.

I opened it up and read the first poem out loud, my voice rising above the sound of the wind battering the walls of my tent.  I read it again and again and again.

It was a poem called “Power.”

About the Author
Cheryl Strayed is the author of the critically acclaimed novel Torch.  Her stories and essays have appeared in numerous magazines and journals, including The New York Times Magazine, The Washington Post Magazine, Vogue, The Rumpus, Self, The Missouri Review, The Sun, The Best American Essays, and elsewhere.  She is also the author of Tiny Beautiful Things: Advice on Love and Life from Dear Sugar.  She lives in Portland, Oregon.

Praise for Wild
“Spectacular . . . Gripping . . . A breathtaking adventure tale and a profound meditation on the nature of grief and survival . . . A literary and human triumph.” —Dani Shapiro, New York Times Book Review

“One of the most original, heartbreaking and beautiful American memoirs in years.” —Michael Schaub, National Public Radio

“Sexy, uplifting . . . Fierce and funny . . . Strayed hammers home her hard-won sentences like a box of nails. The cumulative welling up I experienced during Wild was partly a response to that too infrequent sight: that of a writer finding her voice, and sustaining it, right in front of your eyes. . . . Riveting.” —Dwight Garner, The New York Times

“Stunning . . . An incredible journey, both inward and outward.” —Garth Stein, author of The Art of Racing in the Rain

“Strayed’s language is so vivid, sharp, and compelling that you feel the heat of the desert, the frigid ice of the High Sierra and the breathtaking power of one remarkable woman finding her way—and herself—one brave step at a time.” —People (4 stars)

“An addictive, gorgeous book that not only entertains, but leaves us the better for having read it.” —The Boston Globe

“Devastating and glorious . . . It is voice—billowing with energy, precise—that carries Wild . . . By laying bare a great unspoken truth of adulthood—that many things in life don’t turn out the way you want them to, and that you can and must live through them anyway—Wild feels real in many ways that many books about ‘finding oneself’ do not.” —Melanie Rehak, Slate

“Incisive and telling . . . Strayed has the ineffable gift every writer longs for, of saying exactly what she means in lines that are both succinct and poetic.” —The Washington Post

“A big, brave, break-your-heart-and-put-it-back-together-again kind of book. Strayed is a courageous, gritty, and deceptively elegant writer. She walked the Pacific Crest Trail to find forgiveness, came back with generosity—and now she shares her reward with us. I snorted with laughter, I wept uncontrollably . . . A beautifully made, utterly realized book.” —Pam Houston, author of Contents May Have Shifted

“Strayed reminds us of what it means to be fully alive, even in the face of catastrophe, physical and psychic hardship, and loss.” —Mira Bartók, author of The Memory Palace

“A vivid, touching, and ultimately inspiring account of a life unraveling, and of the journey that put it back together.” —Wall Street Journal

“Wild is the kind of candid vision quest-like memoir that you don’t come across often. It’s full of revelatory moments that will sometimes crush your heart and sometimes leave you breathlessly inspired. It’s a book that many will fall in love with. It’s a book that will love you back,” –Kevin Sampsell, author of A Common Pornography.

“Arresting . . . So many heal-myself memoirs are available that initially I hesitated about [Wild]. Then I considered the source: Cheryl Strayed, the author of a lyric yet tough-minded first novel [called] Torch—a Great Lakes Book Award finalist . . . Wild [is] Strayed’s account of her 1,100-mile solo hike along the Pacific Crest Trail, from the Mojave Desert to Washington State. Shattered at 26 by her mother’s death, her family’s fragmenting, and the end of her marriage, Strayed upped and decided to do something way out of the realm of her experience; here she confronts snowstorms and rattlesnakes even as she confronts her personal pain. Wish I had her guts!”
–Barbara Hoffert, LibraryJournal.com

“No one can write like Cheryl Strayed. Wild is one of the most unflinching and emotionally honest books I’ve read in a long time. It is about forgiveness and grief and bravery and hope. It is unforgettable.”
–Ann Hood, author of The Knitting Circle