MENUMENU
You can cast your vote for the  2013 Readers’ Choice Award online at oregonlive.com/books. The winner will be announced at the Oregon Book Awards ceremony on April 8th at the Gerding Theater at the Armory. 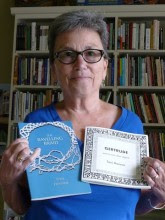 Gertrude: Poems and Other Objects by Toni Hanner

Category
Poetry
Publisher
Traprock Books
Description
I am fascinated by the writings and the life of Gertrude Stein, as well as by the writers and painters of the surrealist movement of the 1920s and ’30s.  Gertrude’s poems were inspired by these artists, and many were written in one glorious week at a Centrum Writing Residency in July 2011


An excerpt from Gertrude
When he woke this morning
the sun
was wearing an overcoat,

the toggle switches that controlled
his movements
were missing

the woman at the next table gazes
into her coffee cup and says
I’m really upset about Van Johnson,
I’m trying to block it out but without success.

he searches everywhere,
looking out the window

he hates to fall back
on manual operation,
the tangle of string, the way

(from the dim radiance of HE 1523)
About the Author 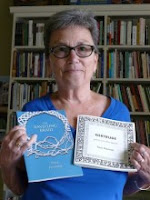 Toni Hanner’s poetry ranges from wildly experimental to narrative.  She enjoys working with forms, particularly persona poems and prose poems.  She had two books published in 2012: The Ravelling Braid, from Tebot Bach and Gertrude, from Traprock.  She lives in Eugene with poet Michael Hanner.
Buy the Book
Powell’s Books
Grassroots Books (Corvallis)