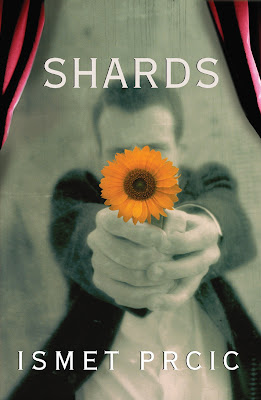 2013 Oregon Book Awards Finalist
Shards by Ismet Prcic
Category
Fiction
Publisher
Grove/Atlantic
Description
Shards is a parallel story about two young Bosnian men, one who takes advantage of being on tour with his theater troupe to escape his war-torn country and ends up as a refugee in the US, and the other who stays in Bosnia to fight. However, at some point, these two narratives collapse into each other, mashing the two main characters together, and the reader is charged with piecing together the fragments of these two lives into a whole that makes sense to them.
An excerpt from Shards
All the Bosnian cities and towns, if not overrun, were suddenly under siege.  This went on for years.  Civilians chopped down park trees, got buried in soccer fields, burned books and furniture, kept chickens on balconies, duct-taped their footwear, caught and ate pigeons, made makeshift stoves out of washing machines, grew mushrooms in basements, replaced broken windows with murky plastic, went nuts and jumped off of buildings, drank rubbing alcohol diluted in chamomile tea until it was no longer flammable, rolled herbal tea cigarettes in toilet paper, suffered, hoped, waited, fucked.  Authorities emptied the jails and mental institutions because they couldn’t provide for the inmates and patients.  Thieves and murderers went back to their families.  Lunatics walked around town doing funny things like comparing people to watermelons and sad things like freezing to death behind churches.  Soldiers fought for all of them and for themselves.  My father, a chemical engineer, got lucky and came up with a contraption that turned industrial fat into edible fat and got paid 10,000 German marks by a small business entrepreneur and war profiteer, which saved us.  My mother ate just enough to survive because she felt so guilty that she couldn’t quit smoking.  She rationed her cigarettes as much as she could, walking around the apartment like a restless ghost, playing her solitaire, counting seconds before the next one.  Sometimes, my brother and I stole a cigarette when the pack was close to full and hid it somewhere in the apartment just to pull it out, unexpectedly, when she didn’t have any left, just to see her eyes light up for a moment.  Later it would break our hearts to see her fingering the wool of the large tapestry in the corridor, looking for our stash, her forefinger touching her lips, her eyes on fire.
About the Author

Ismet Prcic immigrated to the US from Bosnia in 1996. His novel SHARDS has won the Sue Kaufman Prize for First Fiction and the LA Times Art Seidenbaum Award. He holds an MFA from UCI, and was the recipient of a 2010 NEA award. He lives in Portland, Oregon.
Praise for Shards
“Impressive . . . Inventive . . . Pushes against convention, logic, chronology . . . Ambitious and deep . . . [Prcic] succeeds at writing an unsettling and powerful novel.”
—The New York Times Book Review

“Ismet Prcic has taken apart the complexities of war, love, family and home and scattered them across a novel that is as heartbreaking as it is beautiful. Shards is an original work of art, brutal and honest, and absolutely unforgettable.”
—Dinaw Mengestu, author of How to Read the Air