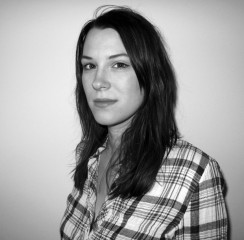 Airin Miller is a fiction writer based in Portland. Her short stories have appeared in Blackbird, Epiphany, and the Little Patuxent Review. Currently at work on her first novel, she is a recent recipient of a Zoland Poetry fellowship with the Vermont Studio Center.

The Patti Page recording of “Mister and Mississippi” currently inspires me. I’ve been listening to it in the morning while I brush my teeth. Her voice is well mannered, though she sings about the life of a vagabond. I love the contrast. The lyrics have the right amount of wanderlust and slight menace. For example, she sings, “My teacher was a gambler, the slickest one afloat.” That’s a world I want to occupy.

Collecting and repurposing. I’ve always loved garish mosaics. I especially like mosaic walls that look slapdash – an excess of cement and several green wine bottles. This seems like a cheesy way to describe my creative process, but it’s true. Stories I hear, people I love, realizations that surprise me turn up in my work as familiar shards.

The most exciting thing about receiving an Oregon Literary Fellowship is feeling like I’m truly an Oregonian. I’ve lived in Portland for four years now. It feels like home. I’m consistently grateful for the lively literary community that surrounds me. There’s so much talent and passion here; it’s galvanizing!

I’m working on a novel that chronicles the deterioration of a romantic relationship between two disparate characters. May, one of the main characters, is a mixed race young woman from the Pamunkey tribe of tidewater Virginia. May is unpolished, sexy, a little odd and otherworldly. In contrast, her partner Winchell is a well-educated ethnomusicologist from an extremely moneyed family. His passion for country and Delta blues has compelled him to vagabond throughout the South.

During a disastrous road trip to Key West, May and Winchell try to separate one another’s true character from their personal folklore. Myths of the Chesapeake Bay, myths of class ascension, myths of Robert Johnson and the Blues become effective weapons during the long, hot ride.

Don’t procrastinate. Start your application early. I worked on my application in pieces, which gave me a chance to deeply consider each component.

The clashing of disparate cultures and the alluring, political frictions of sex charge this excerpt from Airin Miller’s richly poetic novel, Love the Bad Out. May, the half-Pamunkey, blue-collar drifter, and Winchell, well-educated and affluent, meet, court and spark, and seek both answers and escape in each others’ arms during an epic hurricane, where “they’ve spent so much time in bed the sheets feel warm-blooded.” But can they weather the storm of class, anger, prejudice, and race? Can they forge their own romantic mythology, create a new folklore of their lust? Is passion blinding or illuminating? Miller’s nuanced and exquisite prose allows us in to the colliding hearts, bodies, and minds of this extraordinary pair and their powerfully vivid love.

Gene’s was the army-colored SUV with the dented-up passenger side door; something he said he’d been meaning to fix. May watched their headlights identify their path through close-grown trees. The land seemed secretive in the dark, potentially teeming with creatures, until it opened to pasture. “What band are we seeing?” May asked.

“Not sure,” Gene said, “Country blues, I think. Winchell invites me to different things. Right before the season started, he invited me to a birthday party for a musician friend of his. Come to think of it, she wasn’t a friend. She was an acquaintance of someone he knew in Mississippi. This place was grand. It must have been set on 600 acres. Musicians played in all the rooms downstairs throughout the night. There was a tiered portico out front and fiddlers played from the top tier while Neely – that was the birthday girl – blew out candles on a cake so big it was wheeled out of the house. No one could carry it.”

He continued, “The surprise for Neely was that someone had flown in Johnny Winter. Old Johnny Winter played. And you know how magicians use misdirection? This was like that. The whole party was watching Johnny Winter, but the music made us look at one another. The place was crawling with turned on women. Then Neely tells us that a killjoy spirit, who appears when people start fooling around, has haunted the house since something like 1907. Neely dared guests to provoke her.  People coupled off, taking turns kissing in the downstairs bathrooms and the sitting room, where Neely said the spirit’s particularly frisky. I ended up with this woman. We were pressed against the bathroom door, waiting for the sound of a cane on floorboards. Neely was outside the door shouting, ‘She’s summoned by behavior in need of correcting!’”

But this is how all ghosts are summoned. May thought about middle school girls climbing dark staircases backwards while repeating Bloody Mary. She remembered herself, a watcher on the bottom step pretending to want a romantic forecast for her friend, the face of her future husband in a hand mirror, yet wishing instead for the fast reflection of a glossy skull. Wishing, along with the other girls, for the chance to jeer, “You’ll die a virgin! Not even the Hotdog Man will want you!”

They knew that the sad, stringy man who sold hotdogs from a pushcart had kissed a minor and been to jail for it. They knew that not one of them would die virgins, marriage or not. They wanted to sneak a nip of meanness, to tempt the part of fate that burned hot in all things.