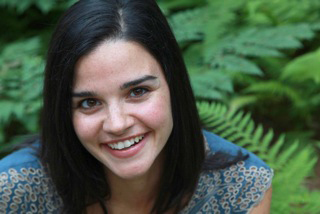 Elena Passarello is a writer, an actor, and the first female winner of the Stella! Shout-out screaming contest. Her book, Let Me Clear My Throat: Essays, was a 2014 Oregon Book Awards finalist. She teaches at Oregon State University in Corvallis.

I am inspired by oddities in history, weird pop culture, and the strangest facts of our natural world. I love research, especially tactile research involving old books and charts and maps and things. It’s a thrill to spend a day in the library, falling down a wormhole with anything on the shelves related to crocodiles, or the history of the Skylab program, or the battle of the Somme. Also: My boyfriend just walked by me typing and said he wants me to write that he is my sole inspiration. So him, too, I guess.

Oregon is very much a place where writers thrive, and to which writers flock. I’ve never lived in a state more chock full of talent. I got to meet a lot of that talent on Literary Arts’ Oregon Author Tour last year, and it was overwhelming to see what a deep bench of great writers Oregon has—great writers in every pocket of the state. So I guess the most exciting thing about getting a fellowship is the opportunity to be in the company of writers like those—to be considered a part of the Oregon Writer tribe. I’m stoked to use the fellowship to try and represent that tribe as best I can.

I’m finishing up my second collection of essays, which Sarabande Books will publish in 2016. The working title is Animals Strike Curious Poses, and each essay of the project covers one notorious animal—a creature we’ve named and written into our historical record. Modeled after the medieval bestiary, the book includes the stories of Arabella, the first spider (and first North American female) in space; Yuka the 40,000 year old Mammoth recently found in the Siberian ice; Cher Ami, the decorated war Pigeon; and Sackerson, Shakespeare’s favorite bear.

Block out some serious time to curate your writing sample. Put together a sample that offers a lively and indicative slice of your work. It might help to put it down for a week or to have an ally read it to assume an outside perspective. Oh, and don’t get discouraged if the first (or second, or beyond) time you apply, you don’t get the call. I’m so glad I didn’t throw in the towel after the first couple applications.

“We could all stand to champion the process of conjuring a voice from inside ourselves,” Passarello writes, in “He Knows Me as the Blind Man Knows the Cuckoo.” She should know. She’s a master conjurer—a sorceress whose Plathian sentences reverberate with a beguiling, incantatory power. Imaginative, inquisitive, and performative, each of the voice-driven essays in this manuscript showcases the range and versatility of its author, who seems hungry for the details of every world she explores. To inhabit Passarello’s sentences is to experience an alert and curious mind at work, one that prizes and celebrates the endless variety of the English language. The result is a collection of songlike essays, pitch-perfect and richly resonant, where the colloquial lives and reigns alongside the prosaic.

from “Arabella,” a work in progress

Not too long after landing, a Cross spider spins her first full web. She casts a line outward, waits to feel it catch, and then secures the other end of the line to the spot where she rests. This creates a single-strand bridge that she can walk across, which she does, reinforcing it with a second bridge-line. Once suspended from the center of that bridge, she free-falls, still pumping silk to form a Y-shape. She then pulls strand after strand from her body, spinning and falling, climbing and plummeting, hooking each strand to the crotch of that Y. Soon, a dozen spokes branch from the y-hub like a silken sunburst.

Without stopping, she turns sideways and circles the spokes, connecting them in thirty cartwheeled spirals. Here is when she switches the gears of her body to produce a stickier silk— viscid enough to trap heavy prey. With this silk she weaves a second spiral. After that’s done, she eats the first spiral, then she eats the hub, and finally she arranges herself in the hub’s place. And though she will never rate a vantage to see her handiwork (even if she could, her eyes can’t focus at such a distance), the young spider has just filled her space with one of our earth’s most spectacular pieces of craftsmanship, just as versions of herself have done for 110 Million years. It takes her about half an hour.

NASA spent a decade designing Skylab’s orbital workshop, and the final blueprint held limited consideration for up and down. Rather than separate its two levels with a solid floor, a crosshatching of beams split the workshop like an open, metallic net. A long blue pole ran through the center of that net, so the astronauts could pull themselves along the 55 feet of the workshop, but the crew scrapped the pole shortly after getting their space bearings. They preferred pushing off the walls and steering with their arms, floating through that empty center to travel from the workshop’s fore level—site of the dinner table, the latrine, and the three booths in which they slept bolted to the walls—to the aft level—with its radio and TV equipment, its biophysics lab, its materials processors, and its plastic vial the size of a human thumb containing a young Cross spider named Arabella.

A spider was built to strum her web like a guitar. She was built to pluck a radial with one striped tarsal claw and feel how the pull of the world changes the vibration of her web. She was built to spin more sticky strands at web-bottom than at web-top, as gravity makes jumping down to prey less taxing than climbing up to it. She was built to drop a gossamer line and free-fall from danger, to walk the strands of her handiwork upside down, using her weight as propulsion.

For nothing says “spider” more than this built-in vigilance, this innate knowledge of what pushes her into the earth and what lifts her away from it. Her legs, claws, mouth, the silk she unspools from inside herself, they all understand—with the hair-trigger sensitivity that comes from eons of experimenting—the facts of our massive planet trying to collide with her body.