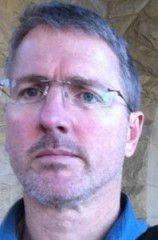 Otis Haschemeyer lives in Eugene. His creative nonfiction, stories, and poems have been published in The Sun, The Missouri Review, The Alaska Quarterly Review, Barrow Street, Southern Indian Review, and others. He has also published essays on the Rumpus.net and reviews.

Other people first. I look at someone and think, “Wow, I know nothing about her or his life at all.” Then I want to figure them out. And I want to know how we’re different and how we’re the same. After that, it’s new worlds and the things people do in those worlds. Invite me in. Let me participate. I love that kind of research.

I write everyday. If I don’t, I feel sick.

Getting connected up with the writing community in Oregon and Portland particularly. There seems to be a vibrant literary community up there. I went to a talk by Michael Chabon and the entire Arlene Schnitzer Concert Hall was full—for a literary writer. That blew my mind. It made me think books are coming back, and we might save the world after all.

I have too many projects. I’m working on finding more time. My fiction collection is important to me. My nonfiction is about the epidemic of police shooting civilians.

“The Storekeeper,” which centers on the moments leading up to a sniper making his first kill, is the work of an adept and innovative storyteller. The author mentions in his application that though this is a work of investigative journalism, he employs particular literary strategies in order to engage the reader. I couldn’t agree more. Haschemeyer’s attention to fascinating technical details, as well as his patience—and his willingness to provide, when describing the trajectories of bullets, a riveting lesson in physics—is nothing less than astonishing. This action-driven prose is lucid, authoritative, and threaded with idiosyncratic details, allowing the author to generate suspense and momentum. The decision to create a braided narrative of first and third person may strike some as counterintuitive, but Haschemeyer not only pulls it off, he makes it seem essential to the story’s telling.

from “The Storekeeper,” originally appearing in The Missouri Review

In January of 1991, four days before the UN Security Council resolution will turn Desert Shield into Desert Storm, the team waits for the scouts on the south side of a dust covered washout deep in the Iraqi desert. Stacey, the storekeeper, a thin man with pinched, worried shoulders, slumps against a rock. It is 70 degrees. In BDUs and thermals, wearing a helmet and tactical vest, and carrying web gear, he’s hot. Across from him, the shade reaches out, but because the team’s pale desert camouflage best matches the sun-bright rocks, they sit in the sun.

The radioman tells him the temperature, humidity, wind speed and direction, as he does every hour whether Stacey needs the information or not. Humidity can slow a bullet down, but this afternoon the air is dry. He knows that because his face is dry. Under his uniform, he drips sweat. The wind speed is 9 miles per hour—light for the desert.

The rifle lies across his thighs. A beige cloth sticks out the muzzle as protection against the grit and dust. Sand fleas move through the hairs on his wrists and under the collar of his shirt. He reaches in his pack for more insect repellent, dabs some on his neck. The lens-hoods on the scope are down, and Stacey closes his eyelids, too.

The scouts return. They located an Iraqi observation post a little over a kilometer away. The CO tightens his lips. “Stacey,” he says. “Splash the target.”

Stacey opens his eyes. For the first time, he is ordered to kill a man.

He was the kind of man who could just look at a gun and tell what’s wrong. He’d glance over, say, “Son, the bolt’s not locked down.” I’d think it was, but when I checked, sure enough, it wasn’t all the way locked down. Or, he’d say, “The shot’s low right—you’re pulling.”

My father was in charge of auto parts distribution in Arkansas, Oklahoma, Kansas, and Missouri, and he was often gone. I knew when he was home he didn’t want to waste time teaching me how to shoot. He wanted to get out in the woods. So, I practiced.

One thing I did was take a toothpick and tape it to a garbage can. I’d start walking backward until I couldn’t see it anymore. Then I’d take one step forward and shoot it.

We hunted all over the wild country near our home in Sebastian County, Arkansas. My dad always seemed to know where the birds and squirrels were, though in truth he didn’t care much for squirrel hunting. He didn’t find it challenging. He preferred quail hunting. I thought squirrel hunting was sporting because the squirrels could hide in the trees.

One day, my dad showed me that deer hunting wasn’t so sporting. Some snow remained on the ground, just in patches in the shade. He held up his hand and motioned for me to turn around. I did, and there was a six point buck about fifty yards away. I stood there for a second. The deer stood there for a second looking at us. Then it ran off into the brush.

“Could you have hit that deer?”