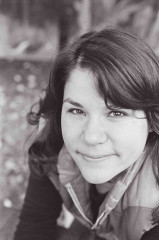 Addie Boswell is an artist and writer in Portland. She likes to tell stories in both images and words, and specializes in oil paintings, paper collage, and children’s picture books. When not working in her home studio, she can be found creating art “in residency” in Oregon’s schools and libraries, where she visits hundreds of students each year.

Inspiration for a novel comes from a combination of what I’m reading, what I’m watching, what I’m thinking about, what’s happening in the news and things I glimpse while going about my daily business. Most of my picture books began directly from overhearing kids say or do funny and surprising things.

Chaotic. Writing the first draft is fast and all-consuming, but during the editing process, I often put the book aside for weeks and months at a time.

The reassurance it provides of the project’s “worthiness.” I won a fellowship for my first picture book — The Rain Stomper– in 2003, and it was acquired not long after, so I consider the OLF a harbinger of good publishing luck.

The final edits of this YA novel to send out to agents, and starting to think about my next novel.

You can keep applying with the same book! I applied with my current manuscript for three years in a row, and every year the book grew stronger.

In Essa Vida (That Life), Addi Boswell introduces the tumultuous world of child homelessness on the streets of Rio de Janeiro, Brazil. We first meet Carlos literally standing on the edge—teetering on a roof ledge, nowhere left to run. What follows is the story that led him to this moment: a theft, a fight causing the death of his unloving guardian, and an escape to the streets where he tries to disappear. While action drives the story, Boswell’s rich details place the reader on the crowded streets of Rio along with Carlos, where we, too, can feel “all the noise pushing against his chest.” As if being on the run isn’t enough, Carlos is almost immediately robbed of his few possessions. But what follows is the beginning of a relationship with these thieves, and the reader is left with the hope that Carlos may not end up so alone after all. This captivating, finely-crafted excerpt is told with just the right balance of action, dialogue, character background, and motivation–the perfect combination for a compelling read.

Carlos felt the air on the ends of his bare toes. The afternoon hung like a heavy curtain, like it always did in Rio. Still, he swore he could feel the air move, raising the hairs on his legs. He flexed his toes to rebalance, just a half-meter from the edge. Lucky his feet were worn to leather now, or the corrugated plastic of the roof would burn through the soles.

There were no ledges this high, just glass glinting where people lined their balconies with broken bottles. The favela spread below him in angles and colors. Blue water tanks, black nests of wires, scrappy metal walls. The slap-dash of it all, as if there was a city rising, or a city falling, and it wasn’t sure which. To his left, Cristo sat atop the steamy air like a ghost. But Cristo didn’t scare him anymore.

Carlos didn’t look down. He looked straight out, past the green square of the fancy American school, where the kids played proper futebol with uniforms. Past shiny Leblon and the market he tried to steal from. Past the churning avenues and their piece of Copacabana beach. Past the waves that would somersault you if you went too deep.

He squinted at the ocean, a band of light on the horizon. He was sure he could smell the water if he only breathed in hard enough. Hot sand and rotten fish. The breath made him dizzy. He hadn’t eaten for, what, two days now? He liked this buzzing, thin feeling. Like the first time he sniffed glue. Like reality was dissolving in front of him and he wasn’t really here at all. He closed his eyes and let the air brush over him again, enough to make his hands raise up just a little at his sides. He took another deep breath in, leaning into the feeling, leaning forward.

It’d be more like gliding really, how the birds ride the air current. All he had to do was lift his arms up a little more, straight out from his shoulders. Shuffle his toes out, one centimeter, and another. Tilt forward, to spill off his heels. The air filled up his chest and he felt himself rising. Getting lighter. A giddiness moved from his stomach up through his head.

Everybody kept telling him he had to choose. This life or the righteous one. Stick up for his friends or leave Rio altogether. But what if he chose this?

A piece of plastic sheeting flew past him, ripped loose by the breeze that wasn’t there.

Carlos started, eyes flying open. He windmilled his arms, suddenly too far forward, trying to push back with his waist even as his shoulders pulled him over. Real air rushed up, cooling the sweat running down his temples. He saw the bottom of the hill below him, the drop that was so much bigger than he thought. His smile turned into an O of surprise.