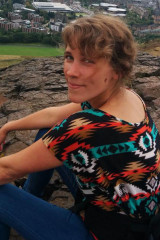 Laura Christian Dunn graduated in 2009 from the MFA program at the University of Montana. Her poems have appeared in journals such as At Length, Fugue, The Bear Deluxe, Zocalo Public Square, and Alligator Juniper, among others. Spider Blue, her chapbook from Dancing Girl Press, is due out later in 2015. Her first full-length play The Snow Queen: A Folk Opera appeared in this year’s Fertile Ground Festival in Portland. She teaches primary school English at Northwest Chinese Academy.

My first source of inspiration was my father’s stories, especially about our family. Because we lived so far away from all of his family in the deep South and my mother’s family in Asia, I came to know my relatives like I would characters in a book. The first true characters I knew were my relatives. In my father’s telling, they were not two-dimensional storybook characters, but characters as round and complex as a Tennessee Williams mother, Byronic hero, or Biblical god, and yet they were related to me, and I was indicted in their actions. I also fell in love with the image through the writing of Joanna Klink, Gwendolyn Brooks, Mary Szybist, and W.G. Sebald. And of course, Dickinson makes me brave.

I write when I have something to write, and I’m patient when nothing is there. I don’t really like to start a project until it has been badgering me for at least a couple of weeks. I do this because I’ll become obsessive once I start, so I feel like it has to be the right time and the right project. When I do start a project, I become a kleptomaniac of time. I’ll steal a piece of time to write at stoplights, during my lunch breaks, or while my clunky computer yawns itself on. When I’m editing, I write and rewrite, often by hand. I can’t just line edit; I have to make sure every word is where it’s supposed to be, so retyping and hand-rewriting the piece help me clarify that aspect, over and over.

The most exciting thing about the fellowship is feeling a part of the community that Literary Arts creates. I just think the work they do is so important, from cramming Arlene Schnitzer to the rafters for a poet to inspiring high school students with college essay mentoring and Writers in the Schools. I’m just thrilled to go to the events and celebrations and be surrounded by people humming with the written word.

I’m working on a book-length poem about my grandparents’ life in 1950s Malaysia, during the Communist Emergency, which was an uprising similar to the Vietnam War but without as much western intervention. I started this project in response to the War on Terror. I was curious about the way terror was being billed as if a new invention of the post 9/11 era. Through my grandparents’ lives, I want to reflect on the idea of terror and safety, and of being caught up in a conflict that is not seemingly your own. I want to write about having an unrooted, global family, and the way in which empire continues to shape the course of people’s lives, even generations later.

I can offer that you could use the application process to fall in love with your project. I used the essay portions to really clarify why the project was important and urgent for me. The application also helped me form a plan of attack for when and how I was going to write it. That way, whether you get the fellowship or not, you still have the means and reasons to create.

In wonderfully muscular lyrics, Laura Christina Dunn’s poems achieve a powerfully resonant and elegiac music. These are gorgeous poems, with subtly hypnotic repetition, anaphora, and incantation, with precise yet startlingly-assembled imagery—in which “steel beams, as fishnets, / knit across night, / headlights yellow air” or “dimes are chattering / in a waistcoat / and the women grow silent / in a convenience store”—singing back that what has been lost with keen yearning, while also yielding complex meditations on the paradoxes of flux and transformation.

he lies on the deck of the American fishing boat,

He woke in a house with black curtains,

mother, an outline of black hair by the sink,

over soap, dishes, and the window beaming

her shadow on the wall, a whole body, indistinct,

like a black and white film shone in bright sunlight.

He tried to lose his hand’s shadow

She sings the Yiddish folk song

about the girl who gets away—far, far away

to the bottom of a wide river. She screams for ground,

the devastating sound at the middle of a century.

along a land, green eyes through rope unraveling,

to get to the other side,

for this shifting city will sink itself.