We’re excited to be featuring the 2016 Oregon Literary Fellowship recipients on our blog this spring! The applications for 2017 fellowships are due Friday, June 24, 2016 and you can read the guidelines and download an application by clicking here.

Matthew Robinson’s words have appeared in War Stories 2015 (Blue Skirt Press), The Night, and The Rain, and The River (Forest Avenue Press), Gobshite Quarterly, Nailed Magazine, Word Riot, and O-Dark-Thirty. In 2015 he received his MFA from Portland State University. Matthew is editor-in-chief of the online literary journal The Gravity of the Thing.

Sometimes it’s the work itself. A specific instance of conflict will come to mind and it won’t go away until I explore it through narrative. That’s when the writing is easiest. Sometimes inspiration needs help. Organizing my working drafts by theme has worked well for me. Once an identifiable theme has four or five stories in its pile, it feels like evidence that some larger exploration is impending, and I find myself at the desk more often. And when all else fails, I put “Cortez the Killer” on quiet repeat, and wait.

It’s a lot of getting ready to write. Waiting for conflict. Looking for it. I buy a lot of books from antique stores and garage sales—books that are problematic: old etiquette manuals, regionally published pamphlets, antiquated science texts. They are wonderful for triggering narratives. Once I have a conflict and a narrative way in, and a few quiet hours, I can draft. I revise my drafts twice before taking them to workshop. I usually sit with feedback for a week or two before I revise again. Then it’s ready to start sending out. And I start waiting for the next conflict and its narrative to show up.

Being added to the list of previous fellowship recipients doesn’t feel real. Writers whose work I read and respect. To have Literary Arts say, hey, this person too, as my eight-year-old says: is melting my face off.

My primary writing focus is a story collection called The Horse Latitudes. It began as a novel but in order to get to a reading experience closer to my own combat experience, the narrative has become fractured and is now structured more like my own system of memory, the way in which I compartmentalize. The stories follow a cavalry platoon through their tour in Baghdad early in the war.

I have begun a coming-home collection, which follows the same cavalry platoon through their ten-year reintegration. It mixes short fiction, creative nonfiction, and essays so as to better explore the varying natures of the stories veterans carry with them. There is an objective version of each event they can’t stop thinking about. But thinking changes their experience of the event. And if so motivated, one could go back, do research, ask others who were there, and what they would find would be neither the objective nor the experienced event. Which is why I have to explore it further.

And I am at work on a non-war story collection and a novel, each with an emphasis on defamiliarization, but right now only their conflicts are known. Until their narratives become less shifty, I can’t say more.

It’s not always time to write. Sometimes it’s time to get ready. You’re reading successful writing. You are reading work by, going to readings featuring, and generally supporting other writers from Oregon (right?). You are revising less-successful drafts. You are sending work out into the world. You are applying to fellowships, residencies, intensives, and classes. You are going to workshop. You are putting your body in close proximity to writers you admire. You are listening. So that when you get an acceptance, a publication, a fellowship, or most importantly, when a story comes that is ready to be written, you are ready.

Matthew Robinson’s work is wholly original. We may have read stories about war, but never have we read stories like these. One enters his work and immediately understands that Robinson will be taking us into territory and introducing us to identities and perspectives within the context of war that we have not had the privilege of reading about until now.  When he writes about soldiers in Iraq, he writes about the longing and desire of men who cannot let it be known how deeply and profoundly they love each other. In his story, “The Combo,” it’s a young soldier’s 19th birthday, and while other soldiers are haggling with prostitutes over the price of sex acts, he simply wants to be alone with a man who is “brown-eyed and goddamn beautiful.” He writes about men who feel imprisoned by the performance of masculinity. He writes about men trying to come to terms with how limited their choices are because they are men and because they are soldiers. Robinson’s writing is raw and revelatory, but it is also tender and vulnerable. If literature is a meditation on what it means to be human, Robinson gives us stories that deepen that meditation.

From “Hypervigilance” originally published in Issue 9 of Grist Journal:

“Can you tell me what happened?”

“Can we go outside?”

“Tell me what happened?”

“If it were nothing, I wouldn’t be here.”

“I’m the resident vet. If something comes up anywhere on site with a vet, I get the call.”

“It was nothing. Started out as nothing. I’ve been back for a month, right? I worked graveyard stuff before, back home, and thought I’d try it here. But these guys have all been working together for years or something and they’re always talking shit. And Ass-Eyed Doug is the worst. Always running it.”

“Doug does have a mouth.”

“All day he’s been talking up this new pistol. Stole enough Xboxes to pay for it I guess and now he’s running it and running it and I’m strapped this and I’m strapped that and finally I just stop listening because who the fuck cares, you know? The second I’m not listening he starts in on me, how a real man rolls heavy, how a real man has to know how to handle his steel and I tell him he talks too much and that he does, in fact, have ass-eyes, and he didn’t think it was funny and he says he’s going to take that new pistol of his and show me what’s up, that he has it here at work, in his locker, and he’s going to show me.”

“Do you think Doug has his pistol at work?”

“I fucking lose it, I tell him fuck you Ass-Eyed, go get it, take good aim, slow your breath and focus on your trigger squeeze, don’t jerk it, aim center-mass, at the bottom of your breath squeeze it easy, and don’t stop ‘til I’m leaking real good because the second you run empty I’ll be heading home to get Thelma Lou. I didn’t say I was going to shoot up the place or anybody else, just that me and Thelma Lou would be back inside an hour and there was no place we couldn’t find him. And—”

“My AR. She’s a beaut. Just like the M-4 from my first tour. I mean, I started off just saying it, but he didn’t believe me, he was smiling, but he should have been scared, I needed him scared.”

“Why did you need him scared?”

“I don’t know. That’s up to Graveyard Boss, who is a piece of shit. I’m here to find out if you are a danger to the campus. The rest is out of my hands.”

“What about Ass-Eyed? Is he fired?”

“Probably not. That crew will say he was joking and you went crazy vet on him and your threat was legit and he was blowing smoke.”

“Have you been losing your shit elsewhere?”

“Not much. I mean I’ve been fucked up a while, only enlisted to avoid jail. I’m sixteen and end up in this epic brawl, right? I knock this kid down and turn to fight somebody else but that kid gets his head stomped to nothing and even though he lived he’s mostly plastic and questions from then on. I get the choose Army, choose jail offer. And I go with Army even though there are wars everywhere but I think anything might be better than the shape of that kid’s head when the kicking stopped.”

“It really was. The war ain’t so bad, it makes its own kind of sense, more than here anyway. Nothing here makes any goddamn sense.” 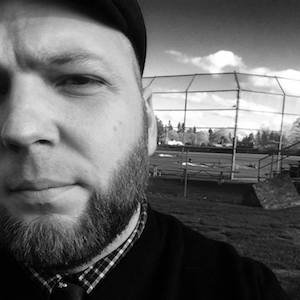