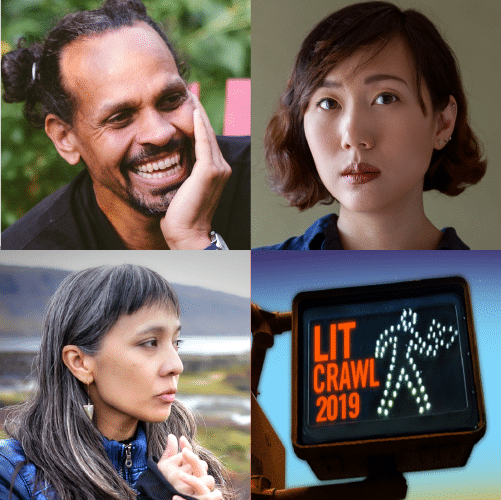 Listen to highlights from select events at Portland’s 2019 Lit Crawl, featuring poetry and fiction readings shared by a collection of voices.

This special episode of The Archive Project is broken up into three sections, each from events that took place during Lit Crawl Portland on November 8, 2019. Lit Crawl is an eclectic mix of literary events staged in nontraditional locations. From poetry readings in bars to literary trivia and karaoke in hotel lobbies, Lit Crawl seeks to unite readers and writers in a single night jam-packed with literary fun and surprising mash-ups.

The episode opens with an impassioned spoken word poem written and performed by DeAngelo Gillispie. We then drop in on an event hosted by Counterpoint Press wherein Dao Strom shares from her novella collection, The Gentle Order of Girls and Boys, that centers the experiences of Vietnamese women in the contemporary landscape. Strom is joined by Jenny M. Chu and Amy Lam for a poem recitation, then she performs an original song. Lastly, we visit an event hosted by The Rumpus, Corporeal Writing, and YesYes Books that features readings from Diannely Antigua, Steph Cha, Ross Gay, and Matt Hart.

Diannely Antigua is a Dominican American poet and educator, born and raised in Massachusetts. Her debut collection Ugly Music was the winner of the Pamet River Prize. A graduate of the MFA program at NYU, she was awarded a Global Research Initiative Fellowship to Florence, Italy. She is the recipient of additional fellowships from CantoMundo, Community of Writers, and the Fine Arts Work Center Summer Program. Her poems can be found in Washington Square Review, Bennington Review, The Adroit Journal, and elsewhere. Her heart is in Brooklyn.

Steph Cha, author of the Juniper Song crime trilogy, is now the Noir Editor at The Los Angeles Review of Books and a contributing book reviewer for The Los Angeles Times. Her most recent book is Your House Will Pay. She lives in Los Angeles with her husband and two basset hounds.

Jenny M. Chu was born and raised in Portland, Oregon by way of immigrant parents from Saigon and Hong Kong. She’s an older sister to a little brother. In life, she is the Community Engagement Manager at Write Around Portland. In life, she thinks and writes. In life, her creative work is intermittently public. In life, her creativity is omnipresent. She often seeks the horizon on a clockless day.

Ross Gay is the author of three books of poetry, including Catalog of Unabashed Gratitude, winner of the 2015 National Book Critics Circle Award and the 2016 Kingsley Tufts Poetry Award. Catalog was also a finalist for the 2015 National Book Award in Poetry, the Ohioana Book Award, the Balcones Poetry Prize, the Hurston-Wright Legacy Award, and it was nominated for an NAACP Image Award. His most recent book is The Book Of Delights. He is a founding board member of the Bloomington Community Orchard, a non-profit, free-fruit-for-all food justice and joy project. Gay has received fellowships from Cave Canem, the Bread Loaf Writer’s Conference, and the Guggenheim Foundation. He teaches at Indiana University.

DeAngelo Gillispie hails from Atlanta, Georgia and has been a part of the spoken word community for the past two decades. He’s performed and hosted his own events at spoken word gatherings around the country as well as internationally. DeAngelo is also one of three authors of a published novel at nineteen years old, titled “Down South Poets Vol. 1”. On the surface, he’s a simple man but the love of the English art and his fellow man compels him to spread the good word and fight the good fight.

Matt Hart is the author of seven books of poems, including Radiant Action, Radiant Companion, and Everything Breaking/For Good. Hart’s poems, reviews, and essays have appeared in The Academy of American Poets online, Big Bell, Gulf Coast, Harvard Review, Jam Tarts Magazine, jubilat, Kenyon Review online, Lungfull!, and POETRY, among others. After earning his BS in Philosophy from Ball State University in 1992, Hart recorded and toured as lead vocalist for the LOOKOUT! Records band Squirtgun. In 2001, Hart earned an MFA in Poetry from the Warren Wilson MFA Program for Writers. His awards include a Pushcart Prize, a 2013 individual artist grant from The Shifting Foundation, and fellowships from both the Bread Loaf Writers’ Conference and the Warren Wilson College MFA Program for Writers. He lives in Cincinnati where he is Associate Professor in Creative Writing and the Chair of Liberal Arts at the Art Academy of Cincinnati.

Amy Lam is a writer and editor based in Portland, Oregon. She is a contributing editor and cohost of Backtalk podcast at Bitch Media, the editorial assistant at diaCRITICS, and the former editorial lead at On She Goes exploring the world of women of color and travel. She is a Kundiman fellow and received an MFA from the University of Mississippi where she was the John & Renee Grisham fellow. Her work has appeared and is forthcoming in Tin House, Gay Mag, Pacifica Literary Review, Utne Reader, and Papercutter.

Dao Strom is the author of a bilingual poetry-art book, You Will Always Be Someone From Somewhere Else, an experimental memoir, We Were Meant To Be a Gentle People, a song cycle, East/West, and two books of fiction, Grass Roof, Tin Roof and The Gentle Order of Girls and Boys. She has received awards from the Creative Capital Foundation, RACC, the NEA, and others. She was born in Vietnam, grew up in the Sierra Nevada foothills of California, and is now based in Portland.