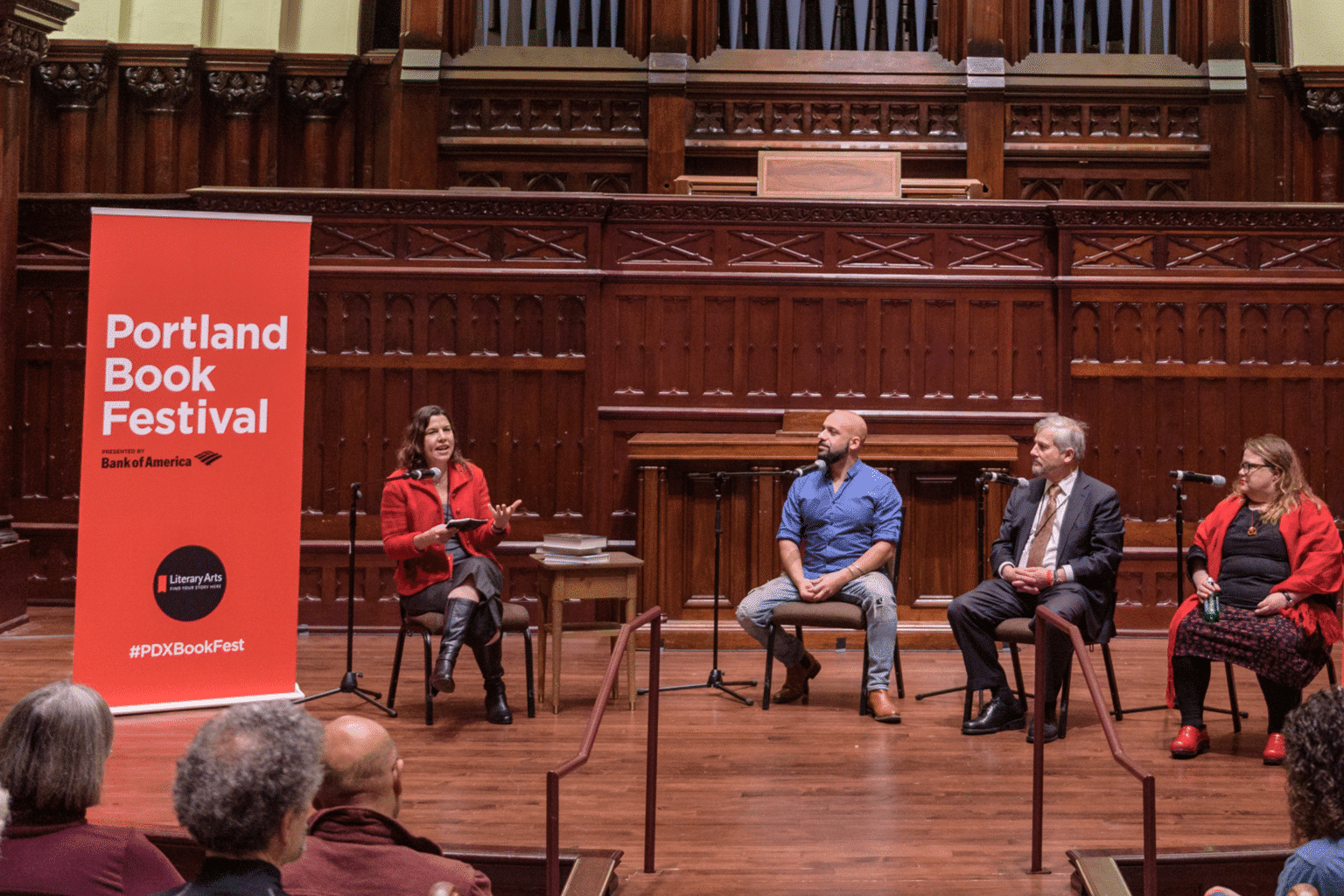 This episode of The Archive Project features a panel discussion of modern masterpieces in a classic genre: the intergenerational family epic. In a conversation recorded live at the 2019 Portland Book Festival, authors Karl Marlantes, Elizabeth McCracken, and Daniel José Older—with moderator Maria Russo of the New York Times—discuss how the themes of their latest works, including ancestry and genealogy, intersect.

Karl Marlantes’s Deep River follows Finnish immigrants, who flee Russian imperialist rule in Finland in the early 1900s and settle in a Washington state logging community, where they strive to rebuild lives and families in an American in flux, while holding fast to the tradition of the home they left behind. A sweeping and enchanting new novel from award-winning author Elizabeth McCracken, Bowlaway is the story of three generations of an unconventional New England family who own and operate a candlepin bowling alley. A sudden death throws the family into upheaval, unraveling myths and secrets long buried. Daniel José Older’s The Book of Lost Saints, Ramon is living in modern New Jersey when the spirit of his aunt, who vanished in the Cuban Revolution, prompts him to unearth their painful family history in this story of revolution, loss, and forgiveness.

It’s very much about history as something that is alive and breathing and moving through us constantly. Most of us have grown up under this false mythology that history is something that has ended and will never happen again, but we all are very aware in our everyday lives that history does walk with us in palpable ways. Discovering that and seeing that in the pages of a book, for me, is immensely gratifying. – Daniel José Older

I always feel like my ability to write from a character comes from if I can create that character from the inside and not the outside. If I’m ever writing any sort of character and I feel like I’m dealing with a mass of attributes and trying to shape them into a character, I know I can’t write that character. But if I feel like I understand the soul of the character, and I’m building outward, then I will hazard it. – Elizabeth McCracken

Karl Marlantes is the author two New York Times bestsellers: Matterhorn: A Novel of the Vietnam War and his nonfiction book What It Is Like to Go to War. His most recent book is Deep River. He is married and has five adult children and three grandchildren. He grew-up in a small logging town on the Oregon coast and fished commercially with his grandfather as a teenager.

Elizabeth McCracken is the author of six books, Bowlaway, Here’s Your Hat What’s Your Hurry (stories), The Giant’s House (a National Book Award finalist), Niagara Falls All Over Again, the memoir An Exact Replica of a Figment of My Imagination, and Thunderstruck & Other Stories (winner of the 2014 Story Prize, long-listed for the National Book Award), three of which were New York Times Notable Books. She has received grants and fellowships from the Guggenheim Foundation and the National Endowment for the Arts. She has served on the faculty at the Iowa Writers’ Workshop and currently holds the James Michener Chair for Fiction at the University of Texas at Austin.

Daniel José Older is the New York Times bestselling author of the young adult series The Shadowshaper Cypher, the Bone Street Rumba urban fantasy series, the middle-grade historical fantasy series Dactyl Hill Squad, and Star Wars: Last Shot. He won the International Latino Book Award and has been nominated for the Kirkus Prize, the Mythopoeic Award, the Locus Award, the Andre Norton Award, and the World Fantasy Award. Shadowshaper was named one of Esquire’s 80 Books Every Person Should Read. His most recent book is The Book of Lost Saints.

Maria Russo, co-author of How to Raise a Reader, is the children’s books editor of the New York Times Book Review. She has been a writer and editor at the Los Angeles Times, the New York Observer, and Salon, and holds a Ph.D. in English and Comparative Literature from Columbia University. She lives in Montclair, New Jersey, with her husband and three children.