When I first read Chris Ware’s Jimmy Corrigan, I was both delighted and perplexed. I had grown up in an era that encouraged jokes about books with pictures being for those who found real reading too difficult. My first few years of high school, my slightly younger brother was collecting X-Men comics, but I was reading JAMES JOYCE. A little later, my early college brain might have murmured something like: The eye is easy; one cultivates serious literature in the intellect, which resides deep in the mind. But then along comes Chris Ware. His images are as artistically intricate as Paul Klee, but drafted with the fastidious precision of an engineer. His color design moves the reader’s gaze over the page in versatile but consistently pleasing ways. His writing is concise and evocative. His stories, though peopled by ordinary, heart-achingly pathetic characters, end up somehow extraordinarily beautiful. Ware’s work was making me see new worlds in new ways—intelligent, complex, and meaningful—something I had never seen in “comics.”

Our Delve seminar, led by Portland cartoonist John Isaacson, was framed by Chris Ware’s masterwork Jimmy Corrigan: The Smartest Kid in the World. Before we dove in, John brought in some experimental comics that first appeared in RAW magazine (edited by Art Spiegelman and his wife Franciose Mouly). It was fascinating to see how one piece in particular directly influenced Ware’s world. The concept is one single panel, repeatedly presenting with a single spot of earth; the only thing that changes is time. For the most of the piece, we see the corner of a living room. Families move through the frame, their clothing helping to establish the shifts in dates. But the view also jumps back to prehistoric days, and leaps forward to the future—always the same plot of earth, always the same immobile angle. A similar movement in time appeared throughout Ware’s Jimmy Corrigan: one panel depicts a house, the next turns that house into a hospital, then a McDonald’s. The transformation is fascinating, and depressing (like most of Ware’s work).

John’s impressive knowledge of comic book history enhanced our understanding of how Ware has helped move graphic novels back into the cultural conversation. In the 1930’s and 40’s, comics enjoyed their heyday; censors in the 50’s restricted the “Ten-Cent Plague” (check out the book of the same name for a complete history). I had never before realized the through-line: in the 1990’s Jay Leno jokes about books with pictures being for semi-literates because of the aggressive censorship of the 1950’s, which effectively expelled adult themes and ideas from text & image forms. The result was a sanitized industry selling emotive, bug-eyed characters whose emotions children found easy to parse, and some superheroes whose alienating powers awkward outcasts easily identified with (me included, for a time: my favorite X-Men member was Beast, thanks to his impressive vocabulary). But now, Chris Ware’s complex, thoughtful work is changing this decades-long presumption that pairing words and images makes a story “easy.”

Our Delve group marveled at Ware’s raw talent, and his work ethic. The level of detail is astounding, and he lays it all out so precisely, like an architect. In fact, a fellow participant works in an architectural firm, and confirms that they love Ware, in particular (of course) his Building Stories. After Chris Ware’s and Chip Kidd’s talk last night at Literary Arts, I spoke to other Delve participants who were grateful, as I am, to have had the chance to explore Jimmy Corrigan beforehand, together, with the help of a knowledgeable guide. It made the experience that much more meaningful. At one point, Chris Ware spoke of his artistic process as a return to his early imagination, and he referred to those abandoned cables tangled in our childhood basements. Re-connecting them is thrilling. 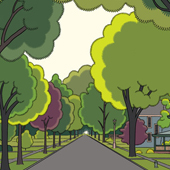