Literary Arts’ partnership with the Multnomah County Library and The Library Foundation made it possible to bring 2017 Everybody Reads author Matthew Desmond to two local high schools to talk with students about his book Evicted: Poverty and Profit in the American City.

First, Desmond visited with about 80 students in the Gresham High School library. Vailey Oehlke, the Director of Libraries for Multnomah County, thanked The Library Foundation for providing copies of the books for students to read in advance and introduced the author. After the applause, Desmond began asking questions.

Initially students were hesitant to answer, but gradually began calling out answers as he asked “What is the average age of a homeless person in this country?” Their answers ranged from the mid-twenties to mid-fifties, and there were murmurs of surprise when Desmond revealed that it is nine. “Nine years old,” he repeated. “When we think about homelessness, we should think about kids.” 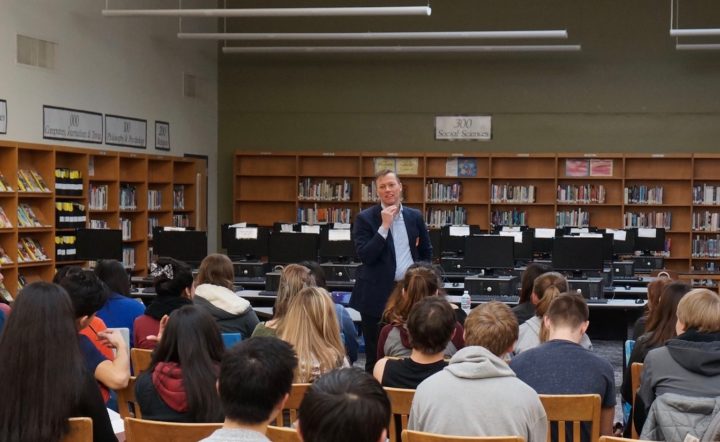 Desmond gave them some sobering statistics on eviction and homelessness: a majority of those living below the poverty line spend over 50% of their income on rent; of those who qualify for public housing assistance, two-thirds receive nothing; the waiting list for public housing in big cities is decades long. “But the housing voucher program works,” he noted. “People buy more groceries; their kids are healthier and their families are more stable. So why don’t we expand it?”

“It costs too much?” suggested one student.

Desmond paced a little as he spoke. “It would cost $22 billion to expand this program to all those who need it,” he said. “That’s not a little number. But,” he stopped. “We’re the richest country in the world, and it’s not just that our GDP is bigger. So how can we not afford to do more?” He went on to explain tax write-offs for interest on a homeowner’s mortgage. “We spend $200 billion subsidizing homeowners,” he said, “and the biggest deductions go to families with six-figure incomes–this policy gives the most help to people who need it least.”

Another student raised their hand. “Why did you write this book?”

“Because I hate poverty,” replied Desmond. He told of growing up in Arizona as a “boy scout in a small town” who was told the story that if you work hard, you’ll do well. But then he got to college and was confronted by a different story: social mobility was falling. As Desmond dug into this story, he also wanted to share it. “I wrote this because I wanted readers to get in touch with the texture and sadness of poverty,” he said. “I wanted to change the way people think–to get them to walk in other people’s shoes.” 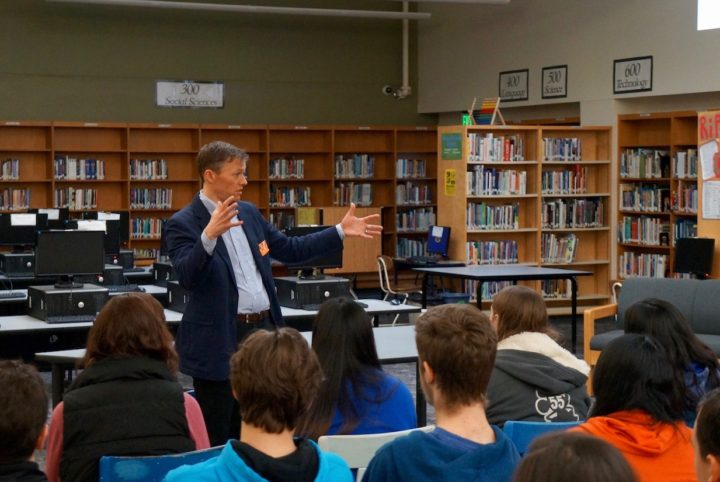 “There are victories,” he added, and explained how in several places there are “nuisance ordinances” that can get people evicted after three calls to 911. “But in most cases,” he explained, “these calls are made by victims of domestic violence.” These victims face the choice: to risk getting evicted by their landlords for calling 911, or to silently take the abuse and keep their homes. Desmond reported that his organization, Just Shelter, has fought and won to get those laws changed.

At the next author visit, at Franklin High School, over 100 students were already seated when Desmond arrived. He began by asking what was on their minds, and students talked about their mascot, the fighting Quaker. Desmond went into the audience to give students the mic, and they were highly engaged and ready to speak up. 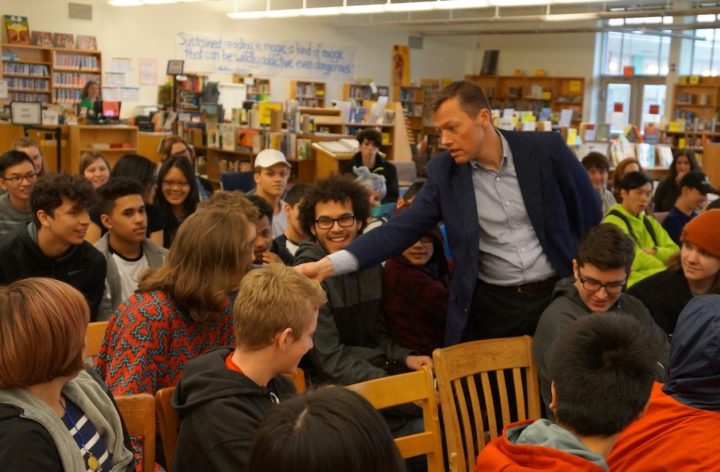 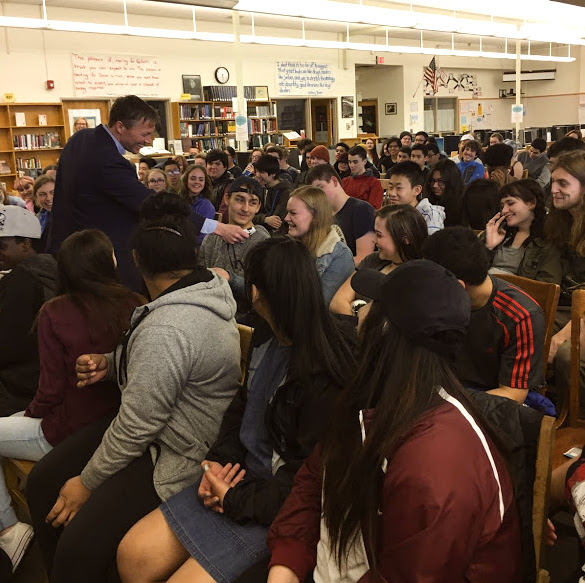 Then Desmond switched gears a bit, asking who knew people who were facing eviction or who had been evicted. Nearly two dozen students raised their hands. “Will you stand up, please?” he asked. “I’d like to get a photo of this.” 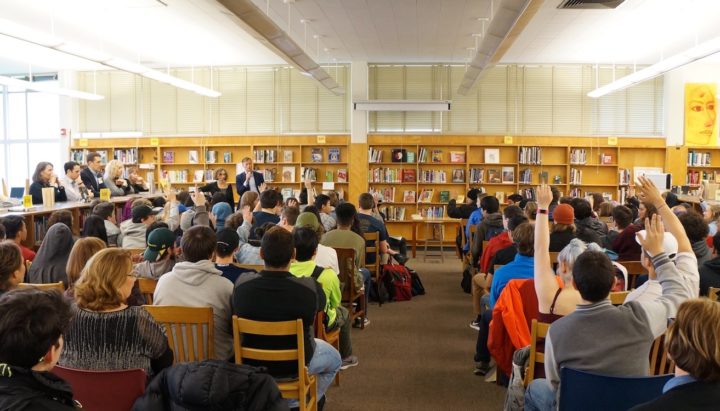 “Evictions used to be rare,” said Desmond. A student raised their hand to ask why they’d become so common. “Well,” he replied, “when were you all born?” Several students called out years in the early 2000s. Desmond laughed a little. “Okay, so in your lifetimes, the incomes of households with no college degree have remained flat or fallen, while median rent has increased by 75 percent.”

Again, Desmond talked with students about the success of the housing voucher program and the lack of funds for it to help all those who need it. He mentioned the homeowner tax benefits and students asked thoughtful follow-up questions, as they dug into how many homeowners would be affected (about 6% of mortgages) as well as the history of rent control. “Do you know what is the biggest lobbying industry in the U.S.?” Students called out guesses, but Desmond shook his head. “It’s realtors. They outspend guns, oil, and big pharma.” He noted how rent control was common until the 1970s, when state legislatures began banning it. “We’ll see what you guys do,” he told students, since Oregon is the only state reconsidering rent control. “The economics say that if you can’t make money, you won’t create housing,” he continued, “But it’s not beyond our intelligence to create nimble rent control that works for tenants and landlords.”

“What can we do, as people who can’t vote yet?” asked one student.

Desmond turned the question around, asking what students had done. One student raised her hand and talked about going to the capital and lobbying with her community. He encouraged students to do the research and see what interested them, whether locally or nationally. “The two most urgent issues facing your generation is that the planet is melting and cities are becoming unlivable,” he said. “It’s going to take pressure from below to get the government to respond.” 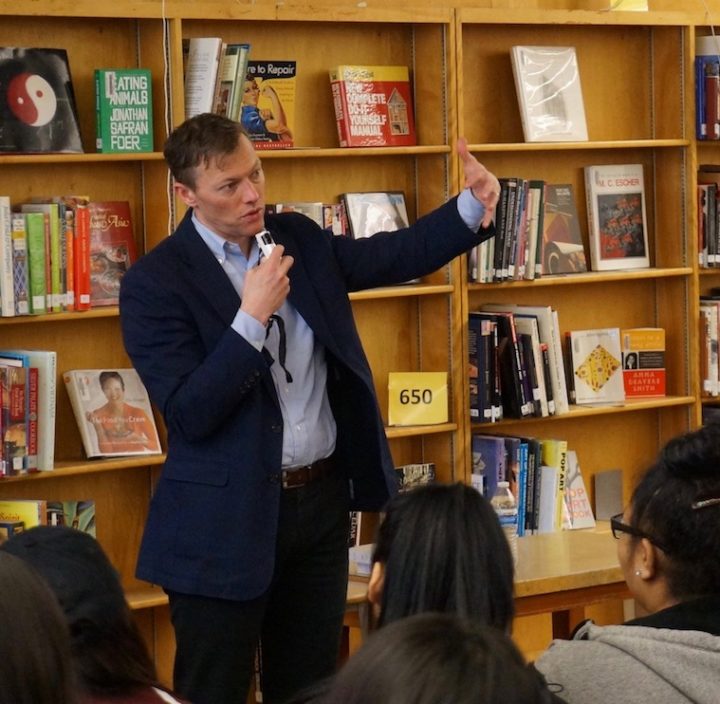 This time when a student asked why Desmond wrote Evicted, he told about his journey in the subject matter and added that this book was his bet that he could get readers to care about the people he wrote about. “They might anger or confuse you, but you have an emotional connection,” he said. Desmond bet that this empathy could do great things–it could draw people together in conversation about difficult things. “Storytelling gets us to where the facts mean something different.”

It was clear that both groups of students were intrigued and would have continuing conversations about the topics they discussed with Desmond.

Literary Arts is grateful to the Multnomah County Library and the Library Foundation for their partnership in making these visits possible. We also want to thank the facilitators at each school, especially teacher Tina Roberts at Gresham and librarian Sandra Childs at Franklin for helping their students be so well prepared with thoughtful questions. And thank you to Matthew Desmond for being an engaging and thought-provoking speaker! 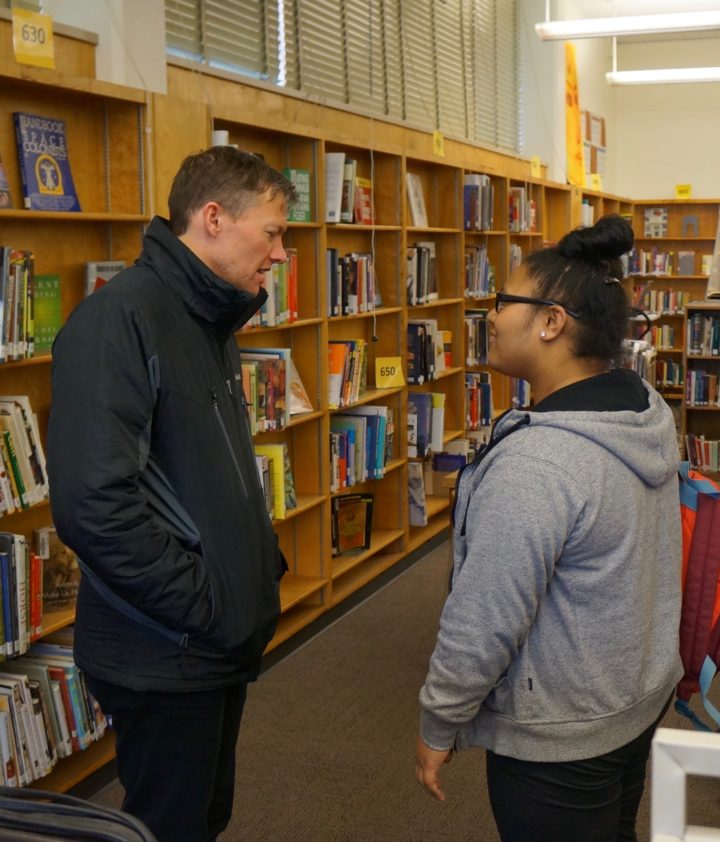 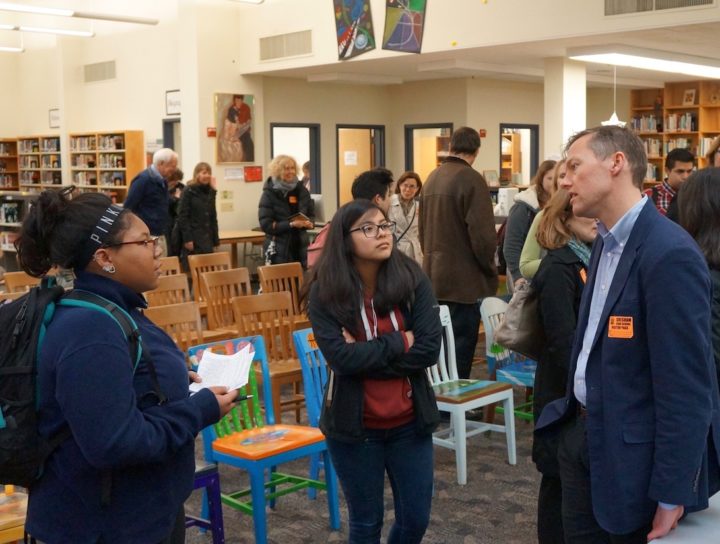