On the afternoon before his lecture at the Schnitz, Reza Aslan met with 32 students at Lincoln High School who work on their school magazine and the newspaper, The Cardinal Times.

Perched on a stool at the front of the classroom, Aslan began by telling students about his background and his journey to becoming a journalist. After his family moved from Iran to the U.S. in 1979, he grew up in the Bay Area. He became interested in “using stories to help people understand who they are,” he said, “and to understand people who are different.” Specifically, he uses storytelling to change the way people think about religion, politics, and identity. 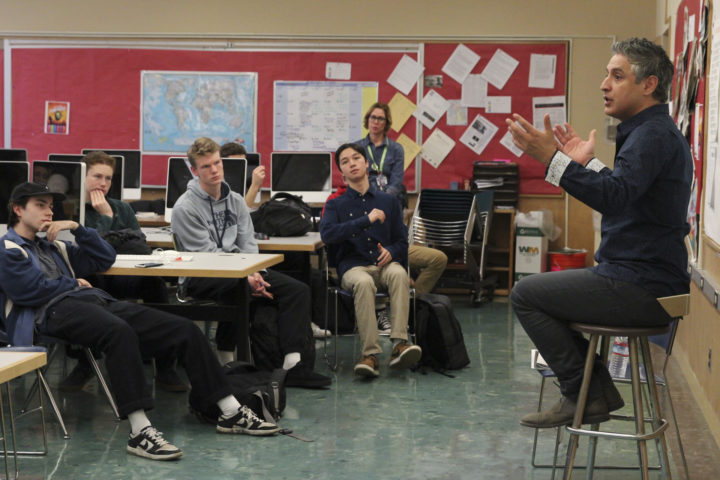 Several students raised their hands when he asked if there were any questions. “It’s one thing to have a passion,” said the student, “but it’s another to break though. How did you?”

Aslan gave a small laugh. “We have this romantic notion of being an artist,” he said, but advised students to ignore the tropes of mysterious inspiration and being a tortured artist. Instead, he emphasized the importance of practical business skills. “It’s not enough to have talent, unfortunately. You need to learn from the early stages to be your own publicist and marketer. It’s not romantic, but you have to.”

Another student raised their hand. “What’s your favorite and least favorite thing about what you do?”

“It’s kind of the same thing,” Aslan replied. “I don’t have a boss. I don’t punch a time card. It’s liberating and fun, but the flip side is that it’s easy to screw off.” He shrugged. “But if you don’t treat writing like a job, it will never be your job. And it’s not like,” he raised his voice, “The spirit moves you, you cannot force it.” Aslan rolled his eyes and students laughed. “The truth is any successful self-employed person has to pretend to have a job. You wake up and it doesn’t matter if you don’t feel like working. You work. Sometimes it’s torture, but I wouldn’t trade it.”

“What do you make of the current media?” asked another student. “Specifically CNN?”

Aslan put his hands together and leaned forward. “First, you must separate print at TV, and then cable TV from the rest. Cable is its own animal, and it is primarily commercial–its mission is to sell, not to provide information.” He spoke of spending time in the newsrooms of CNN and on sets of TV shows, “and you cannot tell the difference. The question they ask is the same: what do we do to get people to watch? And that is not news. If your news comes with commercials, it’s not news.”

When asked about the current administration, Aslan replied, “the good news is that journalism matters again…if not for journalists, we wouldn’t know about the collusion or the sexual abuse accusations. Journalists are shifting the course of history. And you,” he swept his arm to indicate the whole room, “this is the generation who will have to figure it out.”

“The good news,” he continued, “is that there are so many outlets. You can work for a nonprofit instead of cable news.” He discussed news outlets that are owned by billionaires, both on the left and the right. “It’s both scary and exciting.”

“How do you deal with backlash?” asked another student.

“Honestly it’s something I’m so used to that it doesn’t affect me anymore,” replied Aslan. “If you’re writing about religion and politics, people get upset.” He went on to explain how the best tool for debate or argue with someone is to “join their world.”

“If you’re talking to a wall, you are arguing over point of view, and the only way to win is to take on their perspective,” he explained. “For example, you’re trying to discuss socioeconomic inequality with someone who insists that America is the greatest country in the world. I would say, OK, so what does poverty look like in the greatest country?” He advised students to figure out a way to get on the other person’s playing field.

When asked about religion, Aslan explained the term normative by pointing out that if all we ever knew about planes was what we saw on the news, we would believe they were always crashing.  In a country where only 1% of the population is Islamic, most Americans don’t know any Muslims except those they see on TV, which is all the extremists. “But in America, everyone knows someone who is Christian,” he said, “and they easily compare the Christian extremists on TV to their neighbors. They have an idea of normative Christianity.”

When asked about his controversial tweet that led to his CNN show being canceled, Aslan said he didn’t regret it, but noted that he would have been more articulate and not sworn, “since swearing is what created the right-wing backlash.” But, he added later, “If staying required me to stop screaming that the house is on fire, then I was happy to go.”

One of the two hosting teachers, Emily Hensley, asked how student writers could “scream” in a way that their peers would hear it. Aslan replied that “the way you build any connection with an audience is taking on your reader concerns as your own.” He advised them to pay attention to marginalized communities, and that a journalist’s job is to “reframe perceptions people have about reality.”

The conversation finished with a discussion on religion, specifically the separation of church and state (which Aslan insisted does not exist) and the imminent repeal of the Johnson amendment in the new tax bill, so that religious leaders will no longer risk losing their tax-exempt status by advocating for certain political stances. They went on to discuss culture and religion, and how inseparable they are.

“Religion is constantly evolving,” said Aslan, “it’s overly simplistic to think of it as inflexible dogma and doctrine. And what we are starting to see is a convergence of religion and science,” which he is excited about. “Fundamentally both are a way of thinking about the nature of reality.”

It was clear that both students and Aslan enjoyed their thoughtful and thought-provoking time together, and both thanked each other for the conversation. We would like to thank teachers Emily Hensley and Mary Rechner for coordinating the visit and making sure their students were well prepared with great questions. And of course, thank you to the students and Mr. Aslan for being so engaged and engaging!