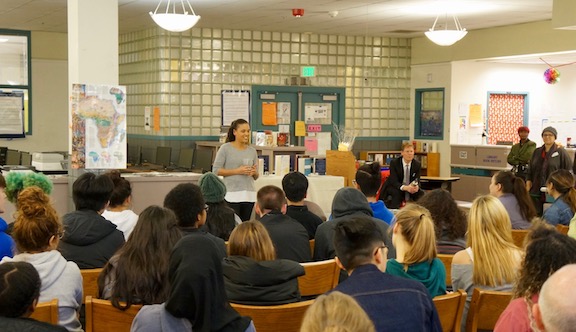 As Jesmyn Ward talked and answered their questions, the student audience in the Benson High School library listened in pin-drop silence, hanging on her every word. Ward, who made history last fall by becoming the first woman to win two National Book Awards in fiction, was frank and open about her journey to becoming a writer and how she works.

“I began as a reader first, and I read everything: literary fiction, YA novels, sci-fi, and fantasy,” she told students, “and I was so impressed by writers.” Ward described how she grew up in a small town in southern Mississippi and attended a private high school on scholarship–where other students bullied her for being poor and black. From these experiences, she “carried the feeling that I wasn’t up to par.” She doubted she was capable of being a writer, and became “good at shrugging off what I loved most.

But when a drunk driver killed her brother, all that changed. “When you’re your age, you think nothing bad will ever happen to you or those you love,” said Ward. “I also thought I had all the time in the world.” Losing her brother made Ward ask herself what she could do that would give her life meaning. She decided to write. “I will at least try,” she recalled telling herself. “I might fail, but I will try.” She was twenty-three.

Ward began “reading like a writer,” examining what the author was doing and trying to emulate it. She enrolled in an MFA program, which she said was good for her because “it taught me that writing is a discipline.” She learned to stop relying on occasional inspiration and to make writing a part of her daily schedule. “And I learned I could actually do it.”

However, she told students, “it wasn’t easy.” After graduation, Hurricane Katrina hit and Ward spent about two years of getting rejected “again and again and again and again. I almost gave up, but something in me is really stubborn,” she said with a smile. So she sent her work out another time, and finally, someone said yes. 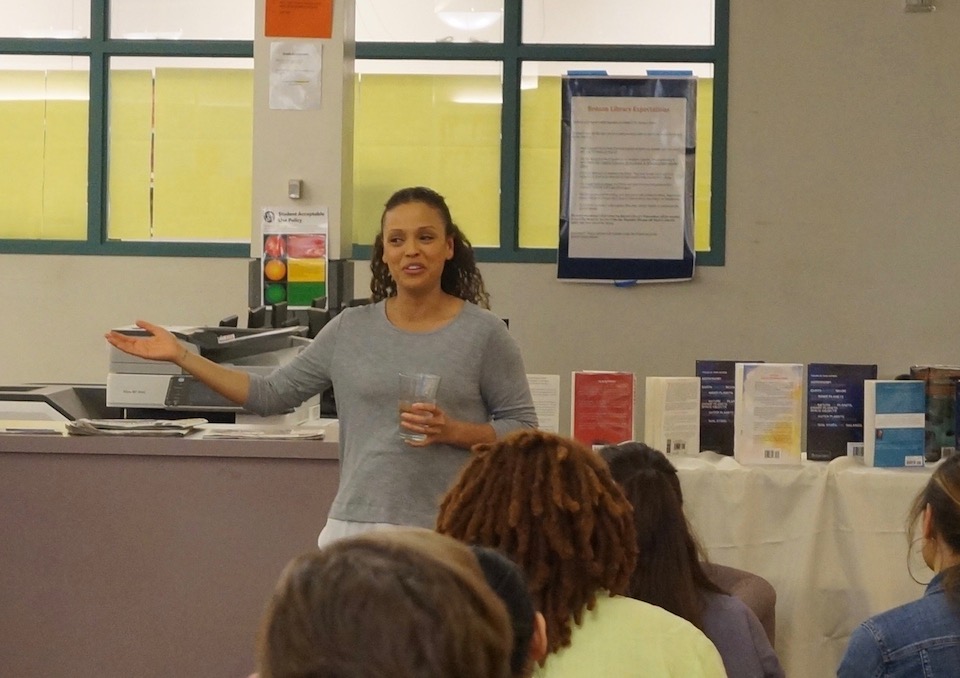 “One thing I always tell students is that whatever your endeavor…you have to hold up your end of the bargain. Do what you can to be the best at what you want to do. You will face rejection again and again, it will rack up into the hundreds, but the importance is that you persist until you find that one person who finds value in what you’re doing.”

Ms. Bruer asked Ward how her fiction is affected by the sense of past and present intertwining, and Ward replied that she is increasingly aware of history’s affect on her characters. “History bears down and affects individuals in very personal ways,” she replied. She mentioned her current project, which deals with the slave trade in New Orleans. “Today there are only two markers for slave pens, and one is in the wrong location. All that pain and suffering has been erased, and that made me angry.” She says she is exploring how that past made the city of New Orleans, and the South, and America what it is.

“Has teaching made you a better writer?” asked one student. “Yes,” she replied, “It makes me slow down and think about craft.” She also noted that younger writers who haven’t yet taken a lot of creative writing classes “do things in their writing that you get taught not to do,” but sometimes it works, and it’s interesting. “It makes you feel, which is what you want from literature.”

A student in the very back row raised his hand and shared that he is writing, and when he shares his work, “I get told some is good, some is not so good–but how do I know what to change?”

“That’s is really hard to do,” Ward said, nodding. She shared how some of her classes are the workshop model, where everyone reads each others’ writing and offers feedback, and that having a group of trusted first readers is invaluable. “I’ll revise it twelve, fifteen times,” she said nonchalantly, as students’ eyes widened, “then send it to friends and ask them, what’s working? What’s not? And as you get feedback, you learn to look for things you have trouble with.” She smiled. “I know that’s not the answer you want. We all want our first draft to come out perfect. But writing takes time.”

Another student asked what Ward would suggest for dealing with writers’ block.

“I turn to writing exercises and prompts,” she replied, saying that it’s easy to get overwhelmed when writing, “but if you have a task, you can complete it.” Ward and the students talked about their writing practices, with Ward sharing that she also used to write at night. Now that she has two children, she writes during the day.

“How do you get back into it when you sit down to write?” asked one student.

“Some writers have rituals,” Ward replied, “and if that works for you, that’s good.” She explained that she needs silence to write. Also, she will “sink in” to her writing by reading back over the previous day’s work.

And in a first for Literary Arts’ author visits, a fire alarm went off about ten minutes before the visit ended. Everyone was good-humored and filed out as the bells rang and lights flashed, and Ward was gracious in talking to a couple students and posing for photos outside. Thanks so much to Benson teacher Ilsa Bruer for helping organize this visit, to the students for their attentiveness and great questions, and to Jesmyn Ward for being such a wonderful writer and speaker! 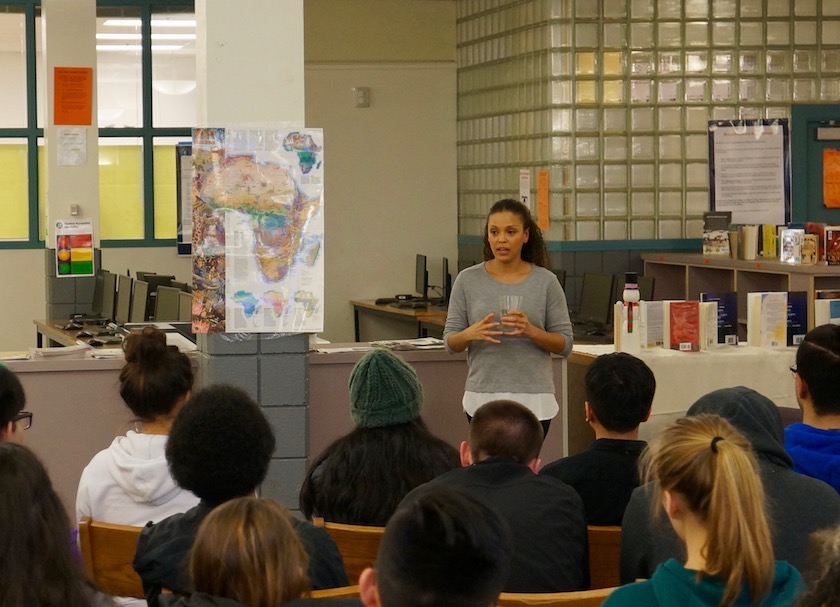 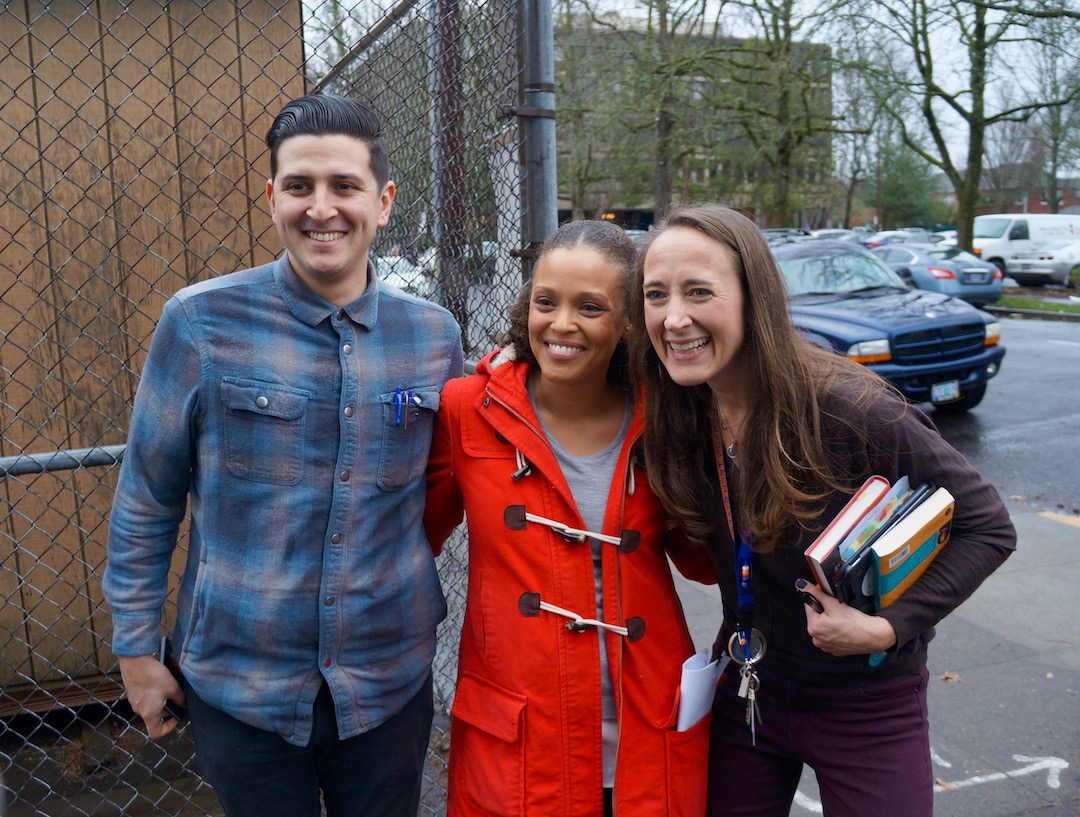