Franklin High School students were ready with questions when Claudia Rankine visited their the library on the morning before her Portland Arts & Lectures event. Rankine began by telling them how she was born in Jamaica and came to the United States as a seven-year-old. Her first experience with poetry was memorizing Emily Dickinson in third grade. As Rankine recited, “Because I could not stop for death…” a few students mouthed the words along with her. But it wasn’t until she read Adrienne Rich’s poetry until college in college that she began to write poetry. 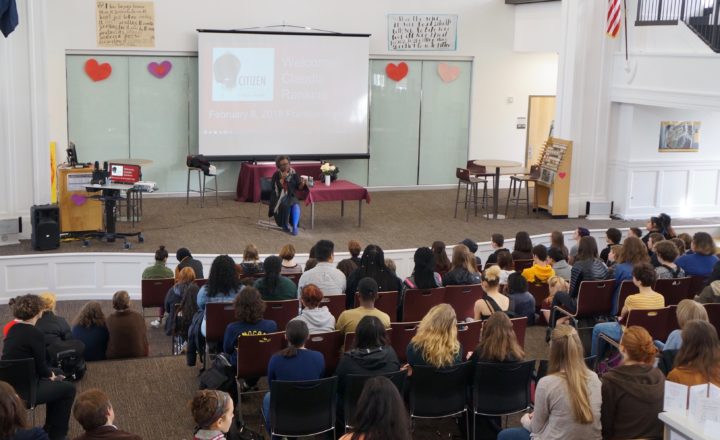 A student raised her hand. “What obstacles have you encountered as a woman of color in the writing world?”

Rankine replied that dealing with “the expectation that you will put out a certain narrative” is challenging. She shared the experience of writing her first book of poetry, Don’t Let Me Be Lonely, and being told by her publisher that it wasn’t poetry. Graywolf Press, her current publisher, picked up the book, “and it turned out to be a great match.” Rankine noted that she could have revised the book for the first publisher, instead. “But I knew I’d written what I meant.” She advised students to “be your own advocate as a writer. Not that you should never listen to criticism,” she continued, “but trust your instincts and passion.” After Don’t Let Me Be Lonely came out, people wrote her letters to tell her how much it meant to them. “So I was really glad that I went with it.” 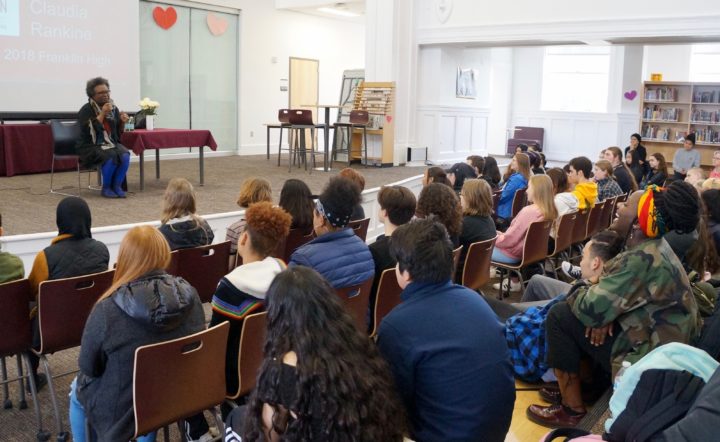 Another student asked how Rankine deals with writer’s block. Rankine smiled. “That’s easy; I read, and one of two things occur.” Either Rankine is so absorbed by the book that she spends the next few days reading, or it triggers a desire to return to her own work. “Reading is as important as writing.”

When asked what is most important about poetry, Rankine continued in that vein. “Read it and write it,” she advised. “Poetry is the one art that is outside the market. All you need is paper and a pencil. Or, not even that–traditionally poetry is memorized…It is the most democratized art form.” She also noted that poetry is “the one genre that takes feelings into account.” When writing poetry, how the poet feels is important, “and I can speak from that position. That’s why I like poetry.” 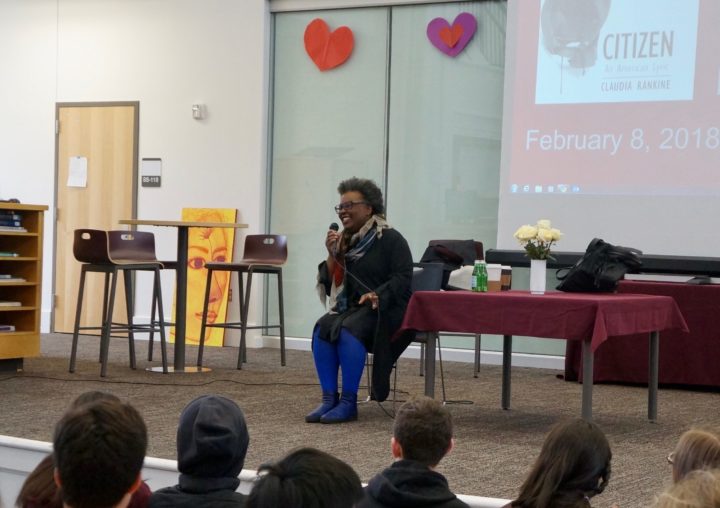 Students also asked for advice on writing poetry. “Have friends you can exchange work with,” Rankine replied, advising them to find the friends who will ask questions–who will push. “You get your community of writers and share work,” she said. “It’s really important.”

Another student asked about the significance of the hood on the cover of Citizen. Rankine explained that it was art by David Hammons, from 1993, called “In the Hood.” She talked about how, “If you put a black hood on a black man he becomes a criminal.” Several students snapped their fingers.

“What was your inspiration for writing Citizen?” asked another student. Rankine began working on it as a reaction to things people said after Hurricane Katrina. Or more specifically, their questions.  “They kept asking, ‘How did this happen? This is the USA.’ And I was like, ‘This is the USA. That’s how it happened.'” Several students laughed and even more snapped. “I wanted to write a book that shows, even in small ways, white people invested in a structure that dehumanizes black people.” 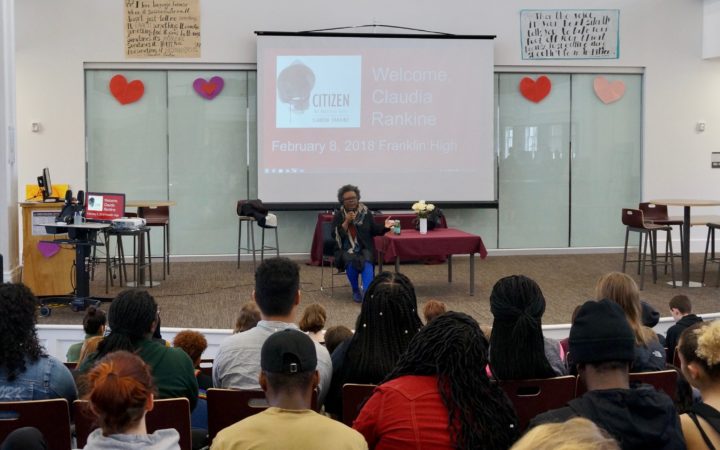 With each moment of silence, several students raised their hands for questions, and many were leaning forward, completely engaged. “What do you want to inspire with your work?” asked one. “You’re not going to believe me, but this is god’s truth,” Rankine said. “I don’t think about wanting anything from a reader.” She concentrates on finding the right form, the right language, and the right word. As for the readers’ reactions, “I can’t control it…I can’t be concerned with what the public thinks or I won’t do my work.” Rankine doesn’t have a person in mind while she is writing, but rather, a question. With Citizen, it turned out that “a lot of people are working through the same question.”

“How long did it take you to write Citizen?” asked another student. “The great thing about poetry is that no one is waiting for it,” Rankine said, laughing. She worked on it slowly until being diagnosed with cancer. After that, she wrote it within a year while doing chemo and treatment. Coincidentally, the book was published only months after Michael Brown was killed.

“What advice would you give to aspiring poets?” a student asked. She advised students to share their work with other writers, and to go to readings. “I cannot say how important reading is,” she added. She encouraged students to read widely, across genres and viewpoints. “Don’t legislate where your love comes from, but you won’t know unless you read everything.” She also repeated that writers should not let others impose a narrative on what they “should” write, but to follow their passion. 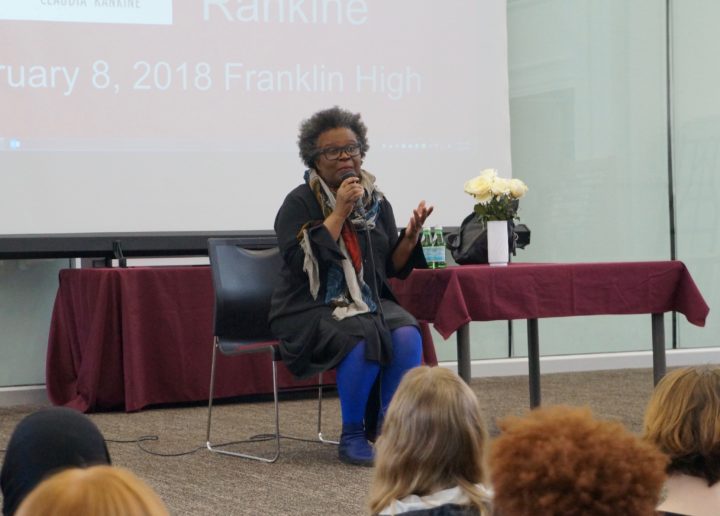 We want to thank the Franklin High School students for their excellent questions, as well as librarian Sandra Childs for helping to organize the visit. A huge thanks as well to Claudia Rankine for her generosity of time and engagement with her student audience, and for her courageous and necessary work. Last but not least, we want to thank Graywolf Press for donating 176 copies of Citizen to both students at Franklin High School and the four additional schools who brought groups of students to the Schnitz that evening for Rankine’s lecture. 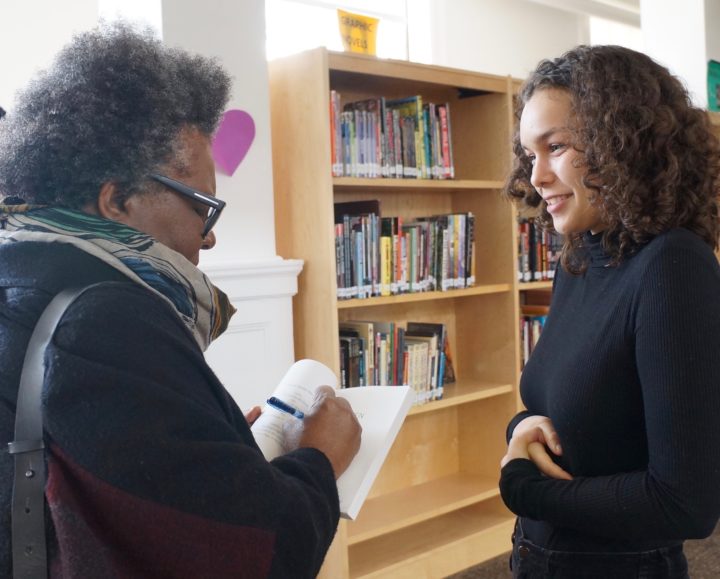