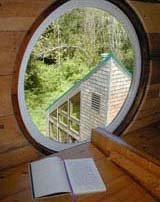 This Wednesday, September 17th, Soapstone celebrates 10 years of residencies for women writers. The celebration will take place at the Buchan Building , 1226 SW Salmon, from 7:00 to 9:30 p.m.

The evening will include a performance piece created from the Wind and Water Studio journals by Kathleen Worley and performed by Kathleen, Louanne Moldovan and Luisa Sermol, a short slide show of Soapstone’s history. Two poetry broadsides by Mimi Khalvati, Soapstone Creek and Soapstone Retreat, will be given away to everyone who attends. The celebration is free and open to the public.

In 1997 Judith and Ruth received the Stewart H. Holbrook Award from Literary Arts for their work with Soapstone and the Flight of the Mind writer’s conference. Ruth comments that, “Soapstone began and has remained a grassroots organization, a fluid community open to all. Judith and I have been at the center of it since its beginning but it is the creation of more than a thousand volunteers and more than 1500 individual donors, women and men of all ages, writers and their supporters from all over the country.”

I asked Ruth what has surprised her the most about the way Soapstone has developed over the years. She replied in part (via email), “I suppose the only thing that has surprised me is the numbers. Close to 1500 individuals have made contributions to Soapstone over the years and close to 1000 have volunteered. For a very small organization with one paid employee who works 15 hours a week, that represents a lot of support. “

The Soapstone writing retreat is located in the Oregon Coast Range, nine miles from Nehalem. The cabins at Soapstone provide residencies for two writers at a time. Soapstone is not currently taking applications for residencies, but interested writers are encouraged to check the Soapstone web site in January 2009 to find out when applications will next be accepted. Oregon writers who have stayed at Soapstone over the years include Judith Arcana, Jan Baross, Tiffany Lee Brown, Angie Chuang, Erin Ergenbright, Molly Gloss, Jennifer Grotz, Cecelia Hagen, Bette Husted, Barbara LaMorticella, Judith Montgomery, Carla Perry, Rita Ramstad, Marjorie Sandor, Penelope Scambly Schott, Sandra Williams and Elizabeth Woody – to name just a few!