Watching a Child on the 507 Train From Portland to Seattle

He points out the window, unfolds a muscleless arm to the swamp,
smiles with peg-like-teeth mouth telling me:

backhoe…backhoe…
Because I’ve convinced myself the moment significant,

and though the swamp is not a backhoe,
I nod and let him believe the objects coincide.

He’s delighted to have named something.
This memory is happening hungry with one sock off,

one sock on. Happening on its way to a bad cold
and between two pages of a book I look up, an unworthy surrogate.

But later, when peat and water and tall birds roll over and over inside him
I won’t be there to clarify the obscure outline of his feeling.

Won’t be anywhere to explain why tractors and cattails make sense.
He’s stuck like me with the cups of childhood clapping from their hooks.

Earthquake, eruption, or only my mother’s loose sleeve brushing against—
no matter how hard you pound it, one key on the piano always remains mute

and what I want to do is tell him
you can’t mine a memory and have it come out complete.

I’d like to say that some beginnings are ruined from the beginning.
I”m a dark shape in the next seat. He’ll remember a weak puff of breath,

the cold window against the rain, the way the train fell to one side for a moment.

—by Zanni Schauffler of Enterprise, 2007 Oregon Literary Fellowship recipient. This poem originally appeared in the first issue of Burnside Review. 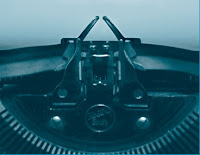