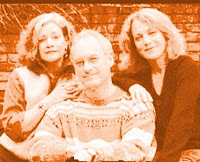 Vitriol and Violets won the Angus Bowmer Award for Drama in 2004. It was written by Sherry Lamoreaux, Shelly Lipkin and Louanne Moldovan (pictured at left).

In January of 2009, Vitriol and Violets will premiere as a musical, with music and lyrics by Dave Frishberg. It will premiere as part of Portland Area Theatre Alliance’s Fertile Ground: A City-Wide Festival of New Work.

We asked Sherry Lamoreaux, what’s been the most exciting or challenging aspect about creating this production?

“Neither Shelly, Louanne or I had ever written a musical, so that was a challenge, and we were working within the constraints of revising a play that had already been successful, so we wanted to alter it as little as possible. The most exciting part so far has been listening to each new song Dave has written, and then watching and listening as Dave and Bill Wells (our talented musical director) work with the actor/singers to bring those songs another step. It’s not traditional musical theatre; Dave has written the songs in what he calls a “confidential” manner, and it will be an intimate production. But there are many exciting steps to come, and I’m sure opening night will be equal parts terror and ecstasy.” 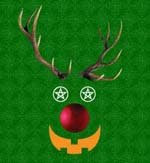 In other dramatic news,Holidazed, by Oregon Book Awards winner Marc Acito and Cynthia Whitcomb is currently playing at Artists Repertory Theatre. In their review, the Oregonian said, “Holidazed does more than recognize and transcend the holidays’ usual attributes — family squabbles, overburdened mothers, and guilt feelings when you see the needy. It manages to be inclusive while reaffirming traditional values too. And that’s an especially deft trick.”