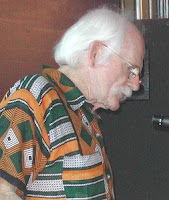 This Saturday, January 17th, poets Carlos Reyes and Travis Champ will be reading in Newport as part of the Nye Beach Writers’ Series.The reading takes place at the Newport Visual Arts Center at 7:00 p.m.

Travis Champ is the author of Old Nehalem Road, published by Nestucca Spit Press. The book features thirty poems, all set in Oregon.

Carlos Reyes is the author of several books, including his most recent, At the Edge of the Western Wave, and Suitcase Full of Crows, which was an Oregon Book Awards finalist in poetry. He has been a writer-in-residence with Writers in the Schools for several years, and also works as a translator and editor.

We asked Carlos to describe a good writing day.

First of all, for me there is no typical writing day. My “writing day” may be at 2 a.m., between classes at a local high school or at a motel waiting for someone to pick up to go out to dinner. A good writing session for me would be when I come up with a half dozen poems written. If in the process of that writing one of the poems I made some discovery (something about my writing, about me, about life) I would consider that a good poem. I don’t get many of those kinds of poems per session.

It used to be that I thought I could only write in the magic hours from midnight to four a.m. Now, I can write at any time of night and day. I don’t wait for inspiration but after not writing for a while I get antsy and start to want to write. I am not disciplined, I am a binge writer and as such usually, if I write one poem I won’t quit until I have come to some logical stopping place. So might end up with a dozen or so new poems. I sometimes think I don’t write much but when I talk to fellow poets I find I end up writing many more poems than they do.

We also asked Carlos if there are any writing prompts that he has found useful or inspring:

If I have a writing prompt it is reading and hearing other poets read their work. I don’t necessarily prepare myself to write. I think it was William Stafford who said it was important be alert for the moment when something that will start a poem or be one will come flying past. I believe that. I feel I am always open to the possibility and ready to seize the moment, phrase or image and take it where it leads me.

What keeps me energized is having several writing projects under way at the same time. For example, at the present I am collecting and editing the pieces for my Selected and New Poems. I am also working on a prose manuscript about my thirty five years of traveling and living in Ireland. Then writing my memoir looms in the background. I am writing about my teenage years in Panama. Then there’s the series of prose poems about Oregon. I have a new poetry manuscript in progress. Almost weekly I write a few poems.

I am not disciplined in my writing. I don’t sit down every morning for a writing time but if I stop and total up the number of poems I write in a month I am almost always surprised. Portland poet Gary Miranda once said that when he wasn’t writing poems he was thinking about it. That describes me perfectly.